Hello, I am installing two Red Series Dimmers and got one installed (office) as the wiring matched up nicely with the PDF scenario where there is a 4 wire traveller going to the Aux switch that all by itself in the second location.

The setup looks like the below except there is no red wire in the traveler romex cable. 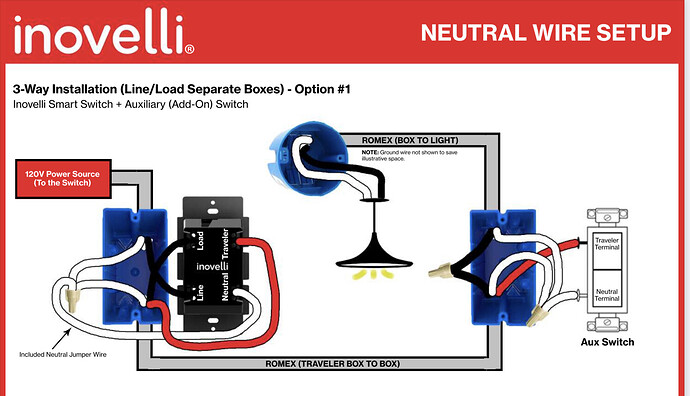 edit: [pics removed as they were more confusing]

So it looks like in the Inovelli, there is a 3-wire in that box, as I see a red conductor. It’s a little tough to see into your boxes without the conductors pulled out a bit more. Was the 3-wire at least in part wired to the original dumb switch?

It sounds like in the other non-Inovelli location you only have two 2-wire Romex.

2 - If #1 is yes, were both switches operating properly as a 3-way, toggling on and off as they should?

3 - Do you have pictures of the connections to the 3-way switch in the non-Inovelli box when the dumb switch was wired in?

Can’t tell for sure, but you could have something similar to what I have. I have a 3-way (well, actually mine’s a 4-way, but that’s not important) using only 14/2 with black and white–but no red–conductors. In this configuration, the white wire is used as one of the travelers, and the neutral is not passed along to the other switch. Instead, a neutral is picked up at the other end. This can be done as long at the neutrals at both ends are on the same circuit. Ideally the white wire being used as a traveler should have black tape wrapped around the ends to show it’s not being used as a neutral, but mine didn’t.

Here’s a diagram of the original, dumb-switch configuration: 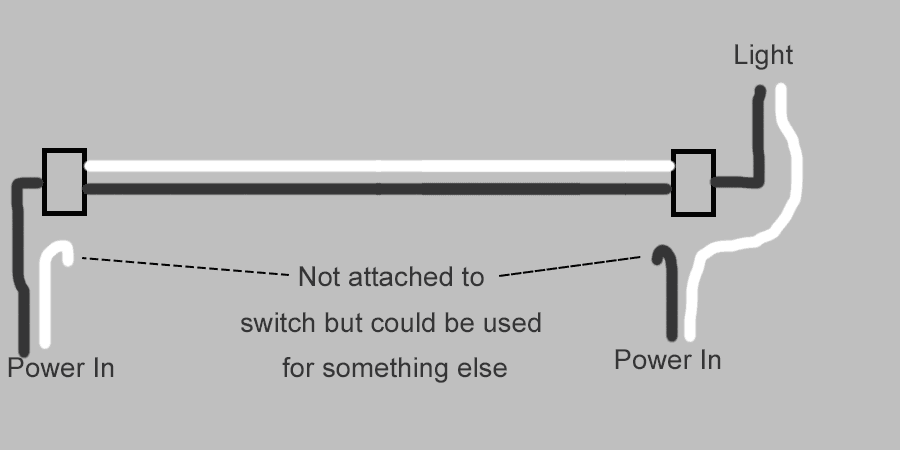 If you’re positive this is what you had originally, know which white wire is the traveler, and are sure both neutrals are on the same circuit, then there are options. If you are unsure of any of that, you should probably have an electrician come in to sort out what’s going on. Mixing up the traveler and neutral or borrowing a neutral from a different circuit would be bad.

BTW: I’m not an electrician, so anything I say should be taken with a healthy dose of skepticism.

I think I got it working finally. I will have to draw out a diagram a bit later but I used this instruction diagram for a non-neutral setup: 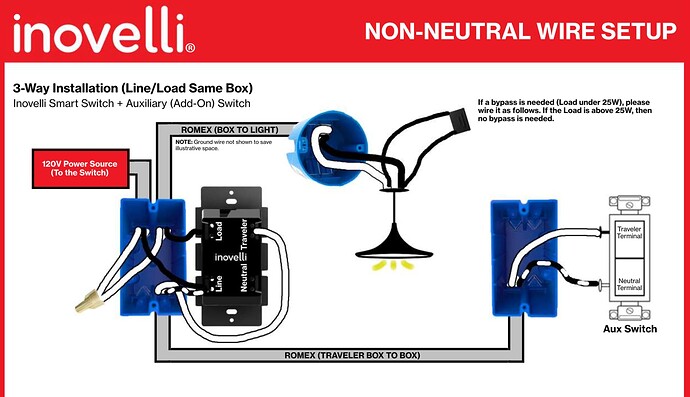 The only difference is that power is coming into the aux companion box. The hot line (power from circuit breaker box) is attached to the neutral terminal of the companion switch along with a black traveler wire (which is probably called something else at this point but I call that entire romex the traveler cables). The black traveler goes to the line input of the inovelli. White traveler wire goes to the traveler input of the inovelli and the light/load goes to load on the inovelli. The rest of the neutrals are joined together in each of the boxes.

Photos are out of the question at this point due to marital orders. I will try to make a diagram with what I got on the comp soonish to better illustrate.

you could have something similar to what I have.

Yep, that is another way to do it. That is typically done when there are receptacles that run parallel to the switches. The neutral is carried through the receptacle leg. As your drawing displays, the clue to this sort of installation is that there is an unterminated neutral in one box and an unterminated hot in the other.

The thing that is confusing in this case is that in the pictures (that were removed), there is a three wire hooked up to the Inovelli. Hopefully we’ll get better pictures which will be a little more telling.

Yes, I think you are correct as there is an extra romex in the load box that I have no clue as to where that is feeding.

I didnt have the original dumb switch wiring as when I first moved into the house I invested in the Lutron Maestro switches and those needed companions, which was what I just replaced.

I may have to, in the future, trace this romex and finally figure out where it goes…

Yes, this was exactly the confusion caused by the pictures because the red (3 wire) that was connected to one of the inovelli was for my office. I have a two inovello dimmer setup and the 2 conductor romex was part of the kitchen circuit. Sorry about the confusion, I was in a hurry to complete and close everything.

Did anyone notice that the Inovelli drawing has a neutral in the Inovelli box? That could mess with some people…

From how you describe it, you must have a neutral in each box.

Yes, I have neutrals all around.

I just don’t have a red wire traveller like the initial wiring diagram setup. It’s probably something along the lines of what @magicalbrad said he has.

Then it should work with the neutrals connected.

Do you mean that I can just add a neutral wire to the innoveli?

From the non-neutral wire setup from above, I’d just add a white wire going from the inovelli neutral to the capped white wire bundle?

Yes, but the aux switch should be wired to the neutral in that box. In the Inovelli drawing, the black wire would go to the neutral terminal instead of the line terminal.

Yep, that did it. I guess the aux/companion only needs the traveler wire connected to the inovelli switch directly. The neutrals are probably all bundled up together down the line anyway.

Thanks @PJF, that was great advice! And thanks also to everyone that assisted in my quest.

Please, when working in electrical boxes, have a voltage sensing wand. This way, you can test if a line is hot or not. Turn off power, disconnect the wires, and cap them. Then turn power back on and test for the hot wires. Then you know which carry power from the breakers and which are switched.