Anyone have cool implementations to show off or home automation stories? (psst - I have one!)

So I wrote about this implementation a LONG time ago and swore I would put up a video (I didn’t) and I recently shared the video (finally) with @Eric_Inovelli and he thought I should share…so here we go.

Before I share though - I think it would be awesome to show implementations if you got em. We all have seen pics of the switches installed and have described, sometimes in painstaking detail, what we have done, but I will say nothing makes an impact more than seeing something in action. With that being said, if you got some videos of your automations or using the unique features of the switches…lets see it.

First let me start off by saying my basement is my baby. We built a house 3 years ago and I swore to my wife I wouldn’t touch the basement for a few years. It was only studded when we moved in. That lasted ROUGHLY about 6 months before I started building a bar with a kegerator (that she promised me for Christmas years ago). So I built a full 14 foot bar with sink, kegerator, storage, etc. All while having no walls. Since that start 2 years ago, I have done a lot. I have drywalled the entire basement, ran multimedia stuff (more on that later) and just kept building it out. It is NOWHERE close to done but it’s coming along.

I decided since I was wiring the basement myself, it would all be “smart” (this is where Inovelli comes in). The entire basement is controlled with smart switches (big whoop), but my bar…hehe…that is where it gets fun. I have a set of pendant lights (5) that all use Phillip Hue bulbs. In addition, I have two recessed can lights in the bar area that are also Hue bulbs. Under the top of the bar, I have LED strip lighting running the length and behind the bar I built rustic wood shelves that have a channel routed in where I laid LEDs in also.

The LEDs for the under bar and the shelves are your run of the mill Amazon RGB specials with a generic adapter. To control the LEDs, I use a GIDERWEL Home Smart ZigBee RGBW LED Strip Controller which allows the LEDs to be joined to the Hue hub. This is cool because I get the control of the Hue app, but also integration into my Hubitat. Also let’s me use third party apps like Hue Disco to make the LEDs pulse to music.

The challenge was that all my bar lighting was Hue controlled. As much as I love being behind the bar, friends and family like to bartend so I wanted an easy way to control everything via switches as well as be able to extend color control to people without an app. I have two red series switches behind the bar. One controls the pendant with local control disable so I can control the Hue bulbs easily. I have a couple scenes that let me set the color of one bulb and then double tap to have that same color mimic’d across and a couple other neat functions.

The bar LEDs is why this post started. I wanted an easy way to allow people to control the accent lights. So I used the config button on the switch to cycle through the “notifications” which just so also control the LED shelve color. What do I mean, I mean I tap the button once the notification light goes to blue and so do the LEDs. I tap again it goes to red, LEDs to red and so on. It’s a fun party trick and allows my friends to pick the LED colors when I’m not there or if they just want to play around. I recently moved to Hubitat off ST and the speed is blazing as you’ll see in the video. Also have some “dimming” capabilities of the LEDs using scenes as well.

All in all been super cool coming up with unique ways to control my LEDs down there. If anyone is interested, I also have a 150" projection screen with backlit LEDs controlled the same way I can show. And if you want to go off-topic - I built a full arcade cabinet that sits next to the bar. (Yes I know I have a problem and a very understanding wife Hahaha).

Happy to chat more but thought I would get a fun thread going. Thanks to @Eric_Inovelli and the whole Inovelli team for making a product that is truly geared towards us enthusiasts while still making it friendly for the masses all while keeping it affordable. A great feat and truly appreciated!

BTW here is a pic of the bar with some of the LEDs on. 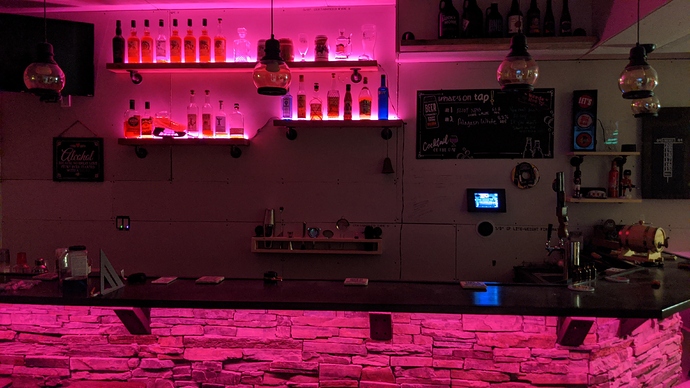 Crap - forgot to mention, it’s also all voice controlled too using Google Home. If you’re keen, you can spot some other “control” mechanisms in the bar pic!