So with v1.52 firmware update for the black series dimmer, we have very basic scene control. It’s just push (1x on top paddle) and held (2x on bottom paddle). While this is nice, it doesn’t seem practical. How do you distinguish turning from just wanting to turn the switch on/off from activating a scene? You can’t. Also prior to v1.52 you could just tie on/off state to automations (in Smart things) and get scene control tied to pressing the paddle up/down.

I was playing with one and I see tap up, held up, tap down, held down and config as scenes. The black series was never marketed as having scene control. My understanding is that this was implemented for software updates to fix bugs by using some of the common code between red and black more than any other reason.

What’s your hub? I don’t see these in Smartthings? I am mobile so I can’t link to the original thread but I’m fairly sure @Eric_Inovelli said that introducing basic scene control in black series dimmer was added to provide an alternative to cheaper priced competitors (now I could be mixing things up and if so I apologize however that’s how I read it).

Really curious where your seeing these additional buttons

You are complaining that your switch that was never intended to have scene controls doesn’t have ENOUGH scene controls after Inovelli gifted it to you?

Also, make sure you are on the latest DTH from Inovelli on ST, not the default handler. That’s likely why you aren’t seeing the additional held scenes.

Also also, scene control can be used for literally anything while also turning on the lights. Perhaps you want more than 1 light to turn on, or perhaps you want something else to turn off, perhaps config you want to toggle the garage door (personal use case), etc.

This is not a complaint, I’m pointing out in Smartthings there’s only single tap control and I’m seeking clarification if this was the intent. See the clip - this is all I see. 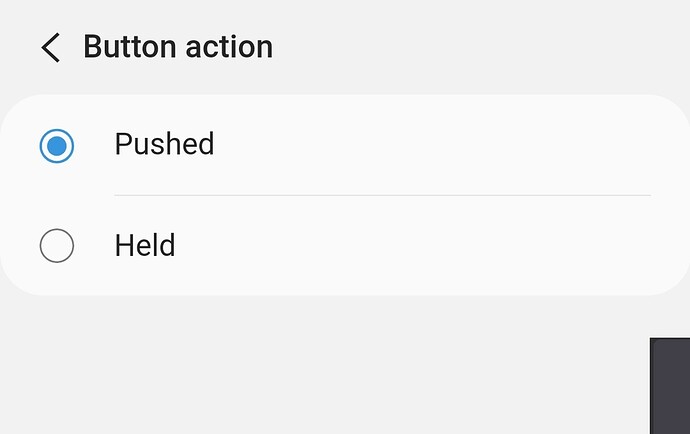 I must be feeling feisty this morning. Sorry for misunderstanding.

Lol, it’s cool. I tried hard to not phrase where it seemed I was complaining. I posted it at 5am after fiddling with my switches so I might not have succeeded.

@PJF appears to see more on his end, I suspect with something other than ST.

I’m perfectly fine if the answer is “that’s all you get” but the way I read the original post about black series scene control lead me to believe it would be more than single tap.

I know there is weird mapping on ST. Pushed is up and held is down I think, but then you get multiple buttons or something like that?

I’m a ST defector, so I can’t really help much more than that.

I don’t have any black series dimmers, so I’m not sure what you are supposed to be seeing w/ST. But one thing you might want to double-check is in the IDE. Open the page for the device and then edit it. Make sure that ST has the proper Type selected. I’ve seen ST inadvertently shift to an improper Type, circumventing the capabilities built into the DH.

I’m use HA so I don’t know what ST shows, but those 5 scenes are what the switch has.

I looked at the thread and it does appear that up and down (on and off click) are all you get with ST.

I don’t recall the firmware I’m using either, I’d have to check tonight. It might be 1.56.

The switch I checked is on firmware 1.52.