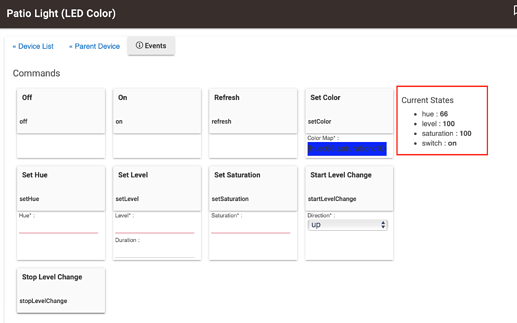 Switch is currently “off” - the LED level should be 10% (physically, the LED is correct). However, the level on the device configuration page for the LED shows it at 100%. I have refreshed the device status a number of times but there is no change. All my other Inovelli switches are showing the same behavior.

Is this expected? It’s almost like the status page is reading the configuration for LED level when “On”. On one of the switches, I have a rule that changes colors and levels based on triggers and there is a different thread on how this rule changes Parameter 14 (for the black dimmer) when setting the LED level. I can see the LED level of the child device change when that happens, but it appears to show the same thing when the switch is “off”.

However, the level on the device configuration page for the LED shows it at 100%.

This level is the level of the output (or brightness of the light(s) connected), not the LED brightness on the dimmer itself.

Edit:…give me a minute. I just reread your question. It looks like children, not the parent device. 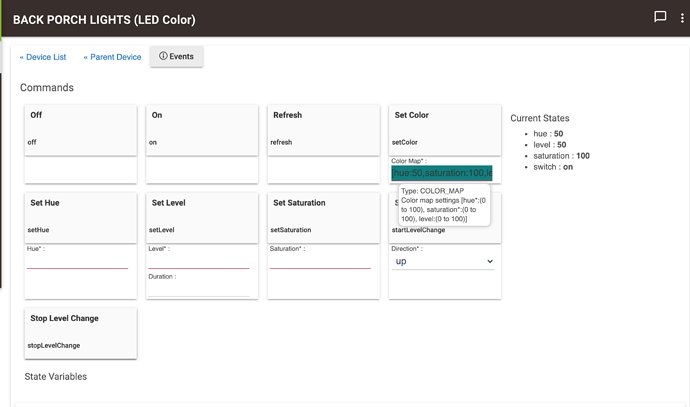 Mine matches the 50% level I have set for LED Strip intensity.

Is your device in range? I have seen the hubitat page not update status when there is poor connectivity, but the switch will still act as it is programmed to.

Mine matches the 50% level I have set for LED Strip intensity.

Thanks - I’m assuming that you have different intensity when on vs off? Can you see if the child LED level changes when you turn the parent switch on/off? It does not change on my switches… I have the latest drivers for all, firmware on dimmers is 1.47 ( for both red and black), 1.11 on the black switches.

Is your device in range?

Last I checked, the range check was green. All switches and LEDS respond correctly to on/off commands from the device page.

@rakeshg - Correct. I have 50% intensity when on, 10% when off. These switches are definitely off. May just be a “feature” that no one looked at before. Perhaps @EricM_Inovelli can chime in to see if this is the norm or maybe a bug.

May just be a “feature” that no one looked at before.

Thanks for checking this out. I can definitely confirm that the LED level of the child device is following the setting on LED Intensity (ON) and not the actual physical state. My rule to change the LED color and level executed when a door was opened. 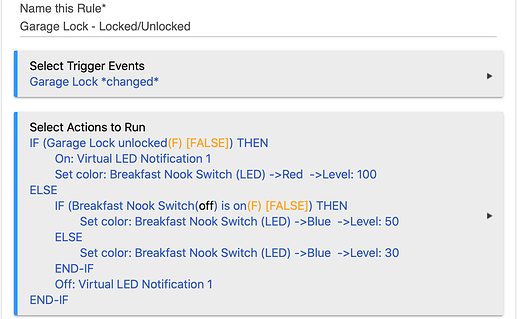 @EricM_Inovelli - if that is the way it is supposed to work, I’m fine with it and will work my rules around that. Thanks…

I can confirm that this is intended behavior.

The LED child device is intended to control color and level of the RGB bar color/brighness, not having anything to do with the dim level of the child itself.

Hmm - I think I may be missing something here. I am trying to match the “level” of the LED (child) shown on the device configuration page vs the physical state of the LED. I am not trying to set the level of the Inovelli switch (parent).

The “level” setting that I’m referring to is the one below (outlined in red): 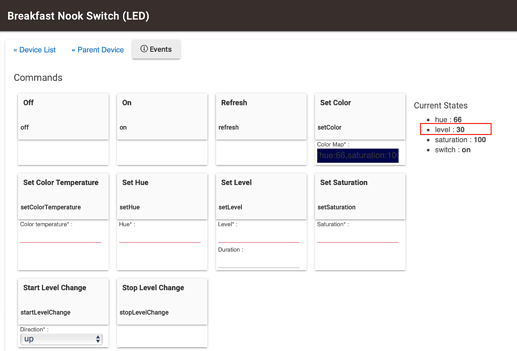 Is this level setting not supposed to match the physical state of the LED?

You have it right. The LED child level is for the bar, not the switch dim level.

Sorry for the confusion.

Is this level setting not supposed to match the physical state of the LED?

The level of this child device should match the configuration parameter “LED Intensity” which is 14 I believe.

The level of this child device should match the configuration parameter “LED Intensity” which is 14 I believe.

What is currently happening is that it shows level at 100 (parameter 14) even if the parent switch is off.

Below is an example for a black series switch where I have no rules changing the LED level. 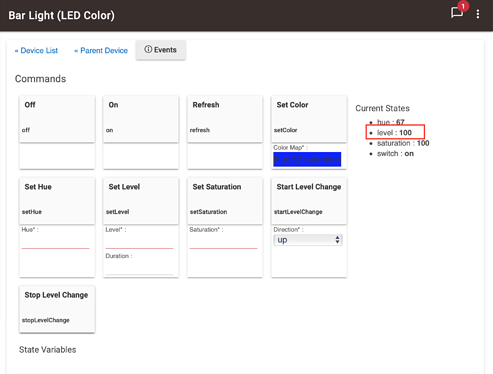 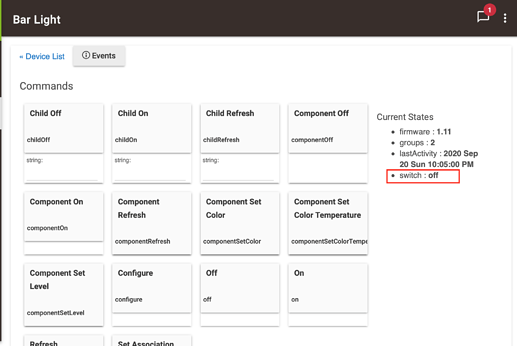 Since the parent switch is off, the physical state of the LED is 10% but the LED status in Hubitat is showing the level as 100%. Is it really supposed to work that way?

Yes, it is supposed to work that way. It is intended to be used to change parameter 13 & 14.