After many hours of troubleshooting a three-way circuit the strange problem of the switch not working correctly when on the red traveler terminal was determined to be that the switch is not compatible with any backlit switches (according to Inovelli tech support). As Involli states on the website, the switch works with dumb switches. As such there should be a caveat that clearly discloses this to prevent wasted time and to allow for better planning for installers.

I’ve never even heard of a backlit dumb switch. I think it would be a tall task for any company to list compatibility for every rare device out there. It’d be like a car company saying it has replaceable windshield wipers but one brand of wipers doesn’t make the right size.

I think your suggestion would provide one way to solve the problem. Maybe the best. Also the current flow is very low as it’s tiny led providing the light. Does the switch have the hardware to determine a level of current/voltage to identify lighted switches in three way configurations?

Because you havn’t seen them please do not assume they are rare. In my experience they are common and since the quote from Invovelli is that they do not work with any back lit switches then that statement is WRONG. So either let installers know or provide a fix such as harjms suggested.
Backlit switches on Amazon

@ChuckvB - There’s some threads about it (probably one of mine or one of the others with the 3 way issues about the On/Off switch. It was found that certain dimmable bulbs would not allow the on/off switch to correct identify the 3 way. It was suggested to replace the dimmable bulbs with non-dimmable style bulbs (maybe incandescent too?), power cycle and test to see if it would identify it correctly.

A product link with 1 review on Amazon doesn’t strengthen your case that these are in the large majority of homes. I’m not contesting that these types of switches exist. I’m just saying, with my line of work that has brought me into hundreds if not thousands of homes, I have not seen a backlit light switch. This would lead me to believe that they are in less than 1% of homes, hence me calling them rare.

I understand you’re upset that there is an issue with your 3 way configuration, and I’m sure you bought these specifically for that use. But the fact remains that you can’t reasonably expect any company to test every possible configuration imaginable before releasing a product. If it will work with 99% of dumb switches, it’s a relatively safe statement to make that it works with dumb switches.

Easiest way forward I see for you from here would be swap the backlit dumb switch with a standard one ($2), use a ge aux switch ($25) or use a second inovelli switch with zwave association ($40)

There is according to Inovelli no reason to test every switch out there because THEY admit it doesn’t work with ANY (get it) any backlit switch. So as they know this as a fact about the design it can be stated with no additional testing of other switches. It was made as a blanket statement for all backlit switches.
What you’re really arguing is whether they should disclose something that you believe is a small percentage of the installations even if they are aware of the condition. That is a business and ethics question. But it still an issue for those they buy the switch and have to spend hours troubleshooting only to find out the product definition is lacking for the as you guess 1% which is still millions of switches out there…

I still think their statement of “works with dumb switch” still holds true. Even though these switches don’t have smart controls, I wouldn’t classify them as a regular dumb switch because of the way they’re wired. I’d actually put them a very smell step above the standard dumb switch.

No neutral connection to the the switch. Wire the same as any three-way. 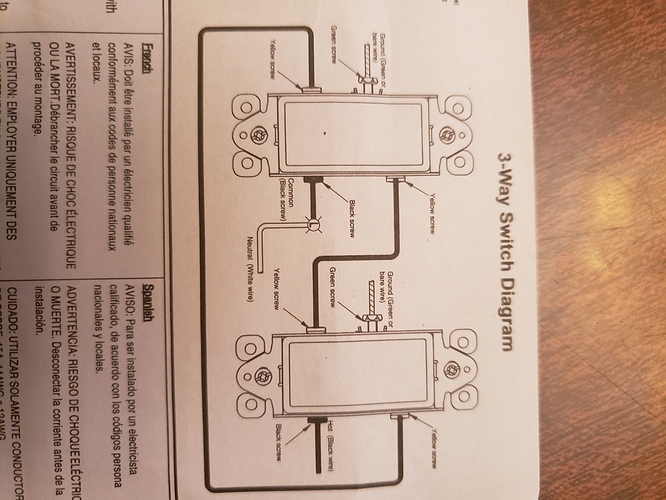 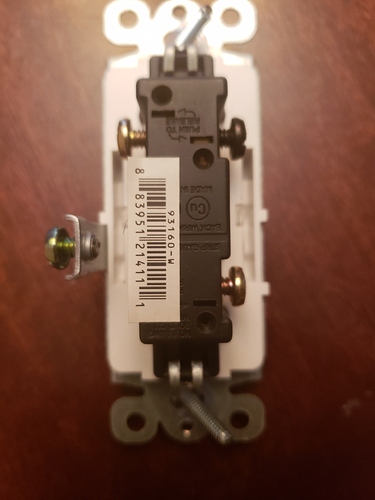 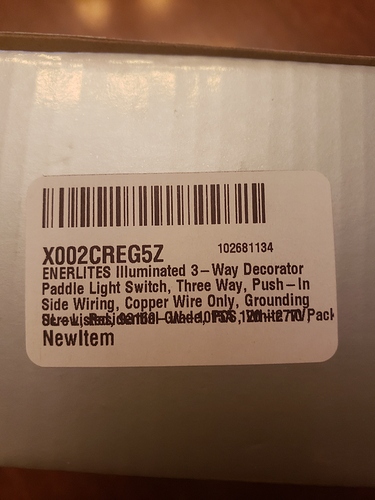 No neutral connection to the the switch. Wire the same as any three-way. 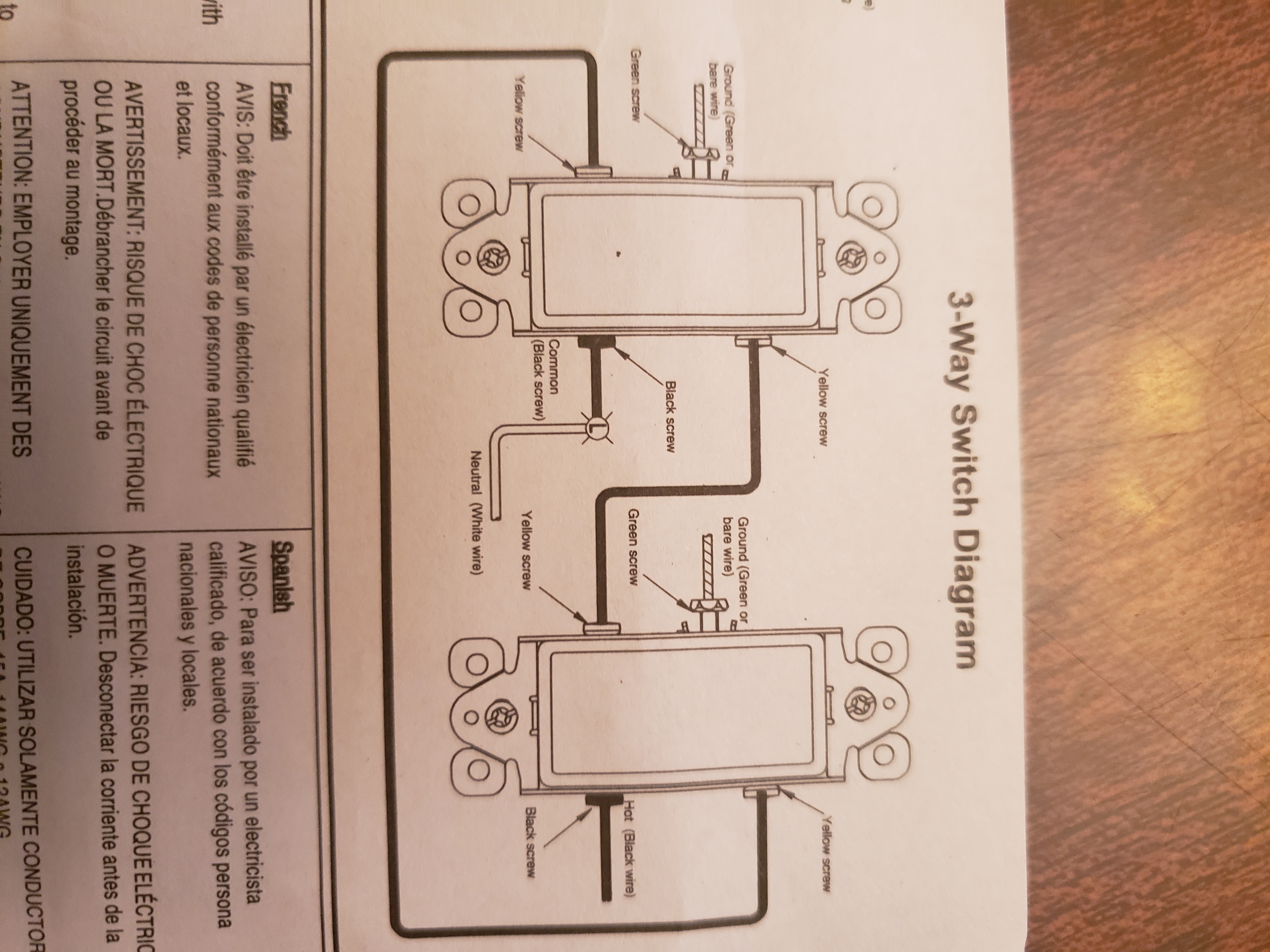 These switches do look like they wire just like a normal 3-way switch so I don’t see how being backlit would cause it not to work. The ones I had found required a neutral to power the light in the switch. Although I do find it slightly humorous they cal it “yellow screw” instead of copper.

I only have a basic level understanding of electrical circuits, so I’m just throwing this out there so I can understand why it doesn’t work. In order for the backlight to work in the off position it would have to complete the circuit to allow a small amount of electricity through right? And if on it completes the circuit right? Is it possible the Inovelli switch can’t determine the state of the dumb switch if this is the case? Would the light never turn off when you had it installed? Not starting any sort of argument just trying to understand the logic behind it.

I would assume the light is just powered by a contact switch built into the paddle. A little tab or something that when it’s down it makes contact with the line terminal to power the light. All the other ones I found required a neutral connection to power the LED hence why I thought it may be because they are wired differently (although this particular model is not). I really don’t have any idea why this particular switch wouldn’t work as functionally it seems no different than a normal 3 way switch.

So, I tried the second switch and had a failure of that switch that tripped the breaker almost immediately when I changed the switch position. Normally I would expect to find a short in the selected traveler circuit that caused the breaker to trip. I believe I heard a pop in the switch. I removed the switch. Troubleshot that circuit and the whole system and found no shorts using a meter and looking for visual indication. Not in the travelers, not between the dumb switch (not illuminated) and the lamp outside, and no evidence of temporary shorts in either switch box. So I installed a dumb switch and all worked fine. Then I installed another brand of smart switch and again no problems the switch and circuit worked perfectly. The load was only one 75 Watt incandescent flood and one 10W Florence flood. At this point I’m at a loss as to why the Inovelli switch fails when the others didn’t.

A switch that trips a breaker almost immediately is almost always from wiring. That’s just in the way a switch works, it’s essentially bridging the connection between 2 terminals. I do have a GE switch with a nice little burn mark on it which was popping a breaker almost instantly. In my case I had left the traveler screw unscrewed and it was sticking out far enough to make contact with the box. But you’re using your traveler terminal so that wouldn’t be the case for you.

Have you tried either of these switches in another location? That would be my first step of troubleshooting. A regular single switch circuit. If it fails there, you’ve got a bad switch. If it works there, then you can move on to tackling the 3way

I agree 100% and expected to find a short, so I probed the circuit before removing the switches. But everything showed no to ground shorts. So there’s still the chance that the short created clearance between the wires and it’s very common for an exposed lead to touch a ground in a box, but no signs of shorts and I visually checked all hot and travelers for exposed copper. Again nothing. I don’t have an explanation plus two other switches worked and actually I earlier tried one other Inovelli switch before this event and it did seem to work but I put it back in its circuit as it was set up for there and this second switch was on its way. Right now I’ve sort of given up. Zooz’s switch is working but I don’t like the look of two different smart switches side by side. So I may remove the second Inovelli switch. I prefer the features of the Inovelli switch but I returned this last one to Amazon yesterday. Sorry If I heard back sooner (your not slow but I have headed to Wholefoods anyway) I could have returned it for investigation. I still don’t rule out a short but I just can’t identify it. Also, what is the load capacity of your switch?

Ps I think the weird behavior of the switch may be a result of the event. This switch behaved as the first one after the breaker popped. If you would like to send me switch I can try one more and return to you if it fails.