that Inovelli will be at CES in 2020, correct? If so, I hope you’ll be taking some videos and photos to share with those of us who can’t make it.

We will be at CES this year. First year with a booth and not just going. Lots of exciting things to see there.

We are also planning on sharing a couple things we have been working on. Some of them will be announced at CES and some may not but we shall see!

Expect videos and photos to be released while we are there. We plan on putting a few things on here as well as on social so if you aren’t following @theinovelli on facebook, Instagram, twitter and youtube, you could miss out.

Awesome! I’ll definitely stop by and see what you have going on! I hope to see your light/fan combo switch. I showed my 8 year old son the concept drawing of it one time and now he asks me about it daily. Lol

Fantastic, I’m here as well and can’t wait to stop by and see what you guys got!!! See you guys soon!

I was able to stop by Inovelli’s booth today and check out everything. Their setup stood out amongst all of the zwave partners. It looked great with the led lighting. I’m excited for the fan light combo dimmer and the led strips that are coming out this year. The Edison bulbs in the top right were also really cool to see. Looks like some exciting stuff is coming soon! 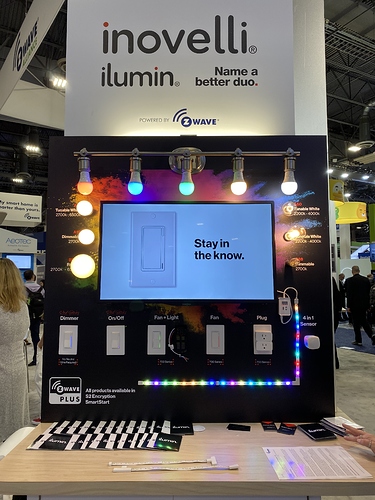 Thanks for posting, exciting stuff!

Good looking both! Exciting stuff heading our way! Thanks for sharing.

Was an amazing first day and thanks @Hoveeman for the picture! Wish I could’ve seen you, but I’m sure Brianna and Courtney took care of you – they did an amazing job today

So, here’s what we have going on at the booth starting from the top down:

Can you share any kind of timeframe on when you expect the Zigbee version of your existing products to be available? Not asking for any committments, just an idea of whether they’ll be out this year or next, or even further down the line.

We have already started working on some of them so not a super long time.

Those 4-1 Sensors are available to order now, with an in stock date of the 13th. I may or may not have already placed an order. Of course, if you’ve got an coupon codes or something that you want to give to early adopters a discount, I could perhaps be convinced to place another…

I wish it were zigbee instead of Zwave, just because I have almost no zwave stuff besides my Inovelli dimmers and bulbs, but at least your recent announcements give hope for zigbee devices in the future.

I’ll add another pic as well! 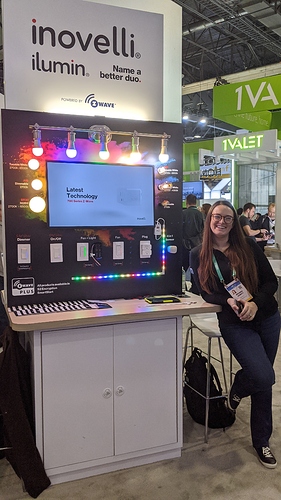 Title: a booth and her designer