I have a Red Series dimmer controlling my great room can lights controlled by Hubitat. I have a largely Zooz network with a couple of Inovelli devices and a couple of GE S1 plug-in dimmers. I am running firmware 1.57 and the latest Red series driver via hubitat package manager. The problem is that the device never seems to report its status to the Hubitat dashboards. I have the default value set to 75% and it always stays at 75% and never shows it’s on/off status. I can control it via the dashboards but it never seesms to know if it’s on or off, therefore turning it off results in going to 75% brightness then a second click will turn it off. This is not too fun late at night. If I set the brightness level in the dashboard the lights will go to that level, but it will never show if it is on or off. I am not sure if this is a Hubitat issue or an Inovelli issue, or both. No other device on my network has this problem. Any thoughts or suggestions?

I would start by leaving Hubitat Dashboard out of the picture and doing some troubleshooting directly from the Device Detail page. If you run commands like “On” and “Off” directly from that page (by clicking the buttons), do the values under “Current States” update as expected? You’d expect to see “switch: on” or “switch: off” appear shortly after running the command that should put the device in that state. Note that the level attribute is tracked separately from switch and will show the last level when on; therefore, the a level of 75% when the device is off is still completely expected if that’s what it was when it was last on.

Dashboard should just show you the same states the Device Detail page does, but depending on how this troubleshooting goes, you’ll at least know whether you’re dealing with a device/driver problem or a Hubitat Dashboard problem. If it’s just Dashboard, what template are you using for this tile, are you using local/LAN or cloud links, and is there a green checkmark towards the top right of the Dashboard?

Thanks for replying. If I turn it on using the device page, it goes on immediately to the predefined default level of 75. If I immediately scroll down it still shown as off in the “current states” section. If I go back to the main device list and reopen the device it shows the same state. If I hit the refresh button then it shows the proper state. So, it seems to me that it is not automatically reporting its state. Is there a variable I need to change?

I am not sure if this is a Hubitat issue or an Inovelli issue, or both.

Or neither … (some other issue with your configuration)
My Inovellis update my Hubitat Dashboard as expected.

What are the settings on your Dashboard options? 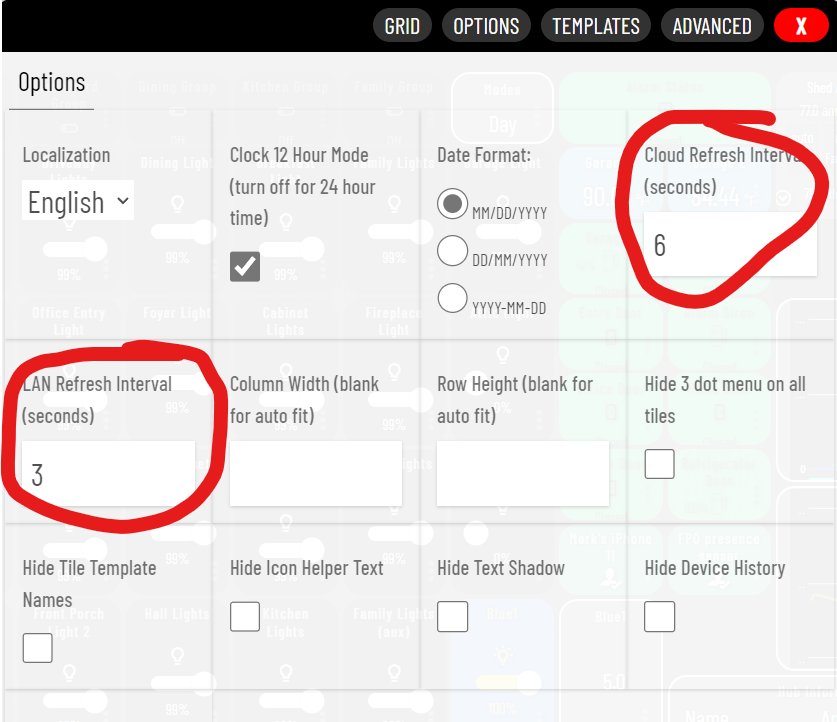 I double checked my dashboard settings, and they are similar to yours for both cloud and local.

The more I play with it, I believe the issue is the switch is not automatically updating its state. I can set the level through the dashboard and the lights will dim accordingly, but when I go to the device page itself on the Hubitat interface it still reads the default level of 75. If I manually hit the refresh button then it shows the level I set via the dashboard.

Which driver are you using? Is it the Hubitat native driver or the Inovelli enhanced driver (you would have had to manually download from Inovelli and install it in Hubitat)

I’m using the latest inovelli driver. I keep it current through package manager. No change in behavior between recent updates.

I do not know Hubitat, but I have seen switches not include properly in ST, where some things function properly and others not. In ST, you can look at the raw description and determine that. I’m not sure if there is an equivalent in Hubitat.

The solution if that is the case is to remove, factory reset and then re-add the switch.

I believe the issue is the switch is not automatically updating its state. I can set the level through the dashboard and the lights will dim accordingly, but when I go to the device page itself on the Hubitat interface it still reads the default level of 75.

The Device Detail page is the authoritative source. The “Current States” section should update in real time (as long as you don’t have Javascript disabled or something odd; you’d probably need to reload the page then, but that isn’t necessary in normal use). If this page is wrong, Dashboard will be wrong, too; Dashboard is just an app that reads the same states (attributes/values under Current States) the device page shows and sends the same commands you can do manually from the device page (using the buttons towards the top). If things don’t work here, they won’t anywhere else, either.

I agree with your assessment — or, really, either the switch isn’t sending its states back to the hub or the driver isn’t parsing them correctly. “Logs” may give some clues if it’s the latter (if you see any Z-Wave commands like SwitchMutlilevelReport or SwitchBinaryReport…though the driver should handle those), but the former would be hard to troubleshoot aside from a lack of logs or state changes in response to real-world changes. The switch should automatically send new states back to the hub with no need for a refresh(), though that is a quirk required in response to physical (non-hub) changes in some old dimmers due to now-expired patent issues. But that’s just a historical side note if you’re dealing with these.

It’s also possible there is a mesh network problem, perhaps the device can hear the hub but the hub can’t hear the device, and more repeaters may be necessary. Your Settings > Z-Wave Details page can give more clues regarding that possibility (if you’re on a C-7 hub).

Beyond that: I’d second Bry’s suggestion to just try excluding and re-pairing. Be sure to remove the “old” (current) device from Hubitat Dashboard and any other apps you’re using it in first, then swap out the “new” device later. (There are a couple other things that could make this theoretically easier if you’re using the device in a lot of apps, but this is a tried-and-true method that should work for device swaps.) If that doesn’t help, I’d re-visit mesh issues, logs, or anything else above to see if it may help.

I don’t believe there is any configuration that would help with this, beyond making sure you don’t have smart bulb mode, local protection, or remote protection enabled — but if you did, some of this wouldn’t be working at all in the first place. But I suppose it’s worth checking. Other than that, configuration seems unlikely to me, though there are a ton of parameters and maybe I’m just not thinking of something.