LZW31-sn got stupid this morning

This morning my LZW31-SN went off the rails. It has been performing without a single hiccup until today. It is set up with the local relay off and controls two Sengled RGBW bulbs connected through the switch… They are set up individually because group control from the Red switch was problematic. This morning the bulbs would not respond to the hue settings in the scenes the switch is supposed to trigger. One was green, the other off. Attempts to control them individually through devices were random at best. I connected the bulbs to a directly wired power source and they performed as expected and were properly controlled from the rule for that switch. In the end I got them working again by disabling “disable local control.” My guess is that the switch is failing and not able to pass enough current for the bulbs to function properly. They worked for the previous six weeks without an issue.

Do you have Smart Bulb Mode enabled?

I do have smart bulb mode enabled.

When you connected the bulbs directly wired, did you try sending commands via the switch? That at least eliminates the switch as a power source to narrow down the issue.

Maybe try excluding and factory resetting the switch to see if that resolves it. If it doesn’t then your suspicion may be correct.

I take it you already tried rebooting the switch.

I connected the bulbs to a directly wired power source and they performed as expected and were properly controlled from the rule for that switch.

“I connected the bulbs to a directly wired power source and they performed as expected and were properly controlled from the rule for that switch.” Yes, the switch correctly controlled the bulbs when they were connected elsewhere. My guess is the switch is no longer able to provide sufficient current to the bulbs. With “local control” enabled they work correctly. Not the way it should be but it does work. I have a vanity with the same two Sengled bulbs installed controlled by a dumb switch that we leave on. I swapped in the two that are behind the red switch and they responded perfectly from the red switch. The switch is unquestionable the issue.

“I connected the bulbs to a directly wired power source and they performed as expected and were properly controlled from the rule for that switch.”

I understand. I saw what you quoted but wasn’t sure if the rule “for” the switch was actually run “from” the switch. I don’t have a Hubitat, but presume you can run a rule from there too.

I use the The Red SN switch to control the two bulbs vIa a “Rule” in Hibitat that controls what its button functions do. On / off, dim. Taps up and down to control “scenes.” Somethig like this. 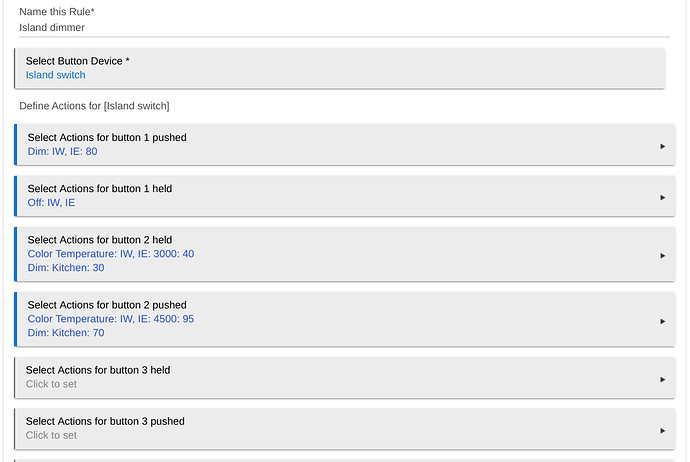