LZW31-SN With Neutral Not Cutting Power When Off (0%)

I wired up a LZW31-SN with a neutral wire setup to test an LED light fixture. I noticed that even when the switch is turned off at 0%, there is still a faint glow on the light. Using a multimeter, I measured 23V of potential between the load and ground (or neutral) wire when the switch is off: 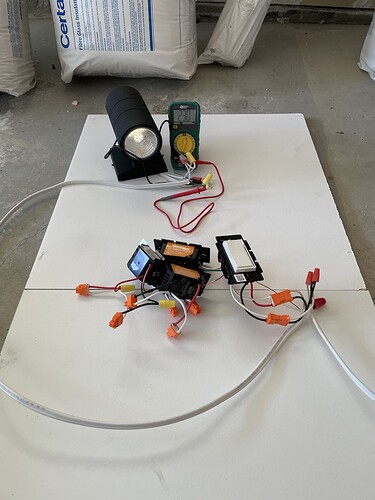 Here is a video showing the problem.

My understanding is that this is a common problem for switches that does not use a neutral wire, as they need to allow a small current through to power itself, and some LED lights require so little power that the small current is enough to turn it on. For switches that uses a neutral, the power can go through the neutral wire instead of going through the load wire, so it shouldn’t have that problem – or at least it should be avoidable.

However, I am using a neutral wire here, and AC Power Type is set to 1 (Neutral) – it should be the default anyway, but I did a factory reset plus setting the parameter on the switch just to be sure.

I also tested another LZW31-SN I have just in case, which gave the same result. I also tested the LZW30-SN on/off switch, as well as a dumb LED dimmer from Lutron, both of which did not have the same issue (as expected). I believe that also ruled out any issues with the neutral on the circuit (back feed, etc) but I am pretty sure I also measured 0 potential between neutral and ground.

I was under the impression that because the LZW31-SN has a neutral mode I wouldn’t run into this problem and would have more options when it comes to choosing LED fixtures, compared to, say, a Lutron Caseta. Am I wrong?

I was under the impression that because the LZW31-SN has a neutral mode I wouldn’t run into this problem and would have more options when it comes to choosing LED fixtures, compared to, say, a Lutron Caseta. Am I wrong?

Smart dimmers are designed with varying components so they’re not all alike. With the LZW31, there may be a slight leak due to some protection circuitry built into the switch. So it’s not uncommon to have a little bit of illumination when off, even with a neutral installation. The solution is to either try a different bulb or use a bypass at the fixture.

Even the switch has a tiny amount of leak through current. I measured 11VAC through my switch in the off position before installing a bypass that sinked the residual current. I do wonder what shorting the “off” load pin to neutral would do with an AFCI breaker.

I do wonder what shorting the “off” load pin to neutral would do with an AFCI breaker.

I have a bypass connected to a AFCI breaker. No issues…that I can tell, so far…however, my new coffee maker does drip the circuit every once and a while.

In 3-way mode, the relay is fired and turns the switch off-off.

I wonder if they could program a firmware option to allow the relay to act in a 2-way mode as well (when installed with neutral config).

The solution is to either try a different bulb

Yeah, with all the newer lights fixtures all having their built-in LEDs and all just list the Lutron ELV dimmers as “compatible”, I’ve concluded there is really no way to tell without testing the specific light, but that’s easier said than done. It’s plausible for the cheaper Home Depot lights, but with the decorative light fixtures at the lighting stores that costs hundreds (or even four digits

I wired up a test rig and was fortunate enough to have found a lighting store that doesn’t look at me crazy when I walk in with this: 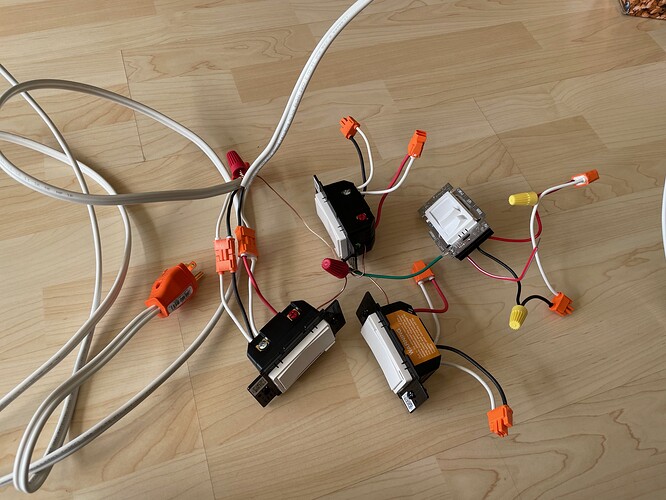 I wonder if they could program a firmware option to allow the relay to act in a 2-way mode as well (when installed with neutral config).

Interesting, which kind of 3-way wiring are you referring to?

Try setting the dimmer to 3-way with dumb switch mode and see what happens.

My 3-ways with toggles (not momentary) click when the load is turned on or off.

Yep, the relay is used with dumb switches but NOT with Aux’s.

Off topic question… but what connectors are these? I have seen that style before and they look very handy! 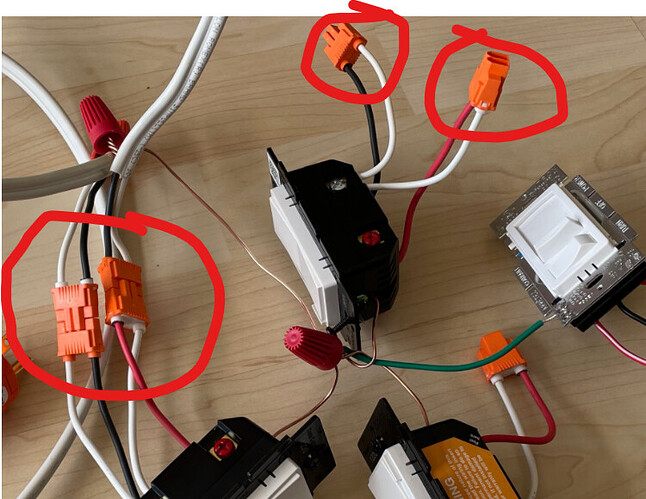 Those are Power Plug Luminaire connectors. They make hanging heavy fixtures much easier since the connection can be completed with a plug instead of holding the fixture and twisting wires while balancing on a ladder. The are specifically allowed in the US electrical code, so they will pass inspection.