I have an LZW45 that I change the color on based on conditions. High level, they are an accent color until motion is detected, and then they fade to white … when the motion stops, they turn off, and then (are supposed to) fade back on to the initial color they were.

The off/on process to go back to the color is because I never found a way to gracefully transition from a white to an rgb … though there is a way from rgb to white. And this is where things go awry. The color staging used to work occasionally (not reliably), but now it seems not to work at all.

For example, if the lights were set to blue but turned off when the white transition happens … the transition back pre-stages the color back to blue, but isn’t supposed to turn the leds back on … the setting of the color immediately turns the lights on to blue and then turns them back off. The catch is that the color just ‘snaps’ in to existence without the soft start that you get when you just turn them on. This is also an issue if the lights were on to start … the off->pre-stage->on sequence was used to prevent the harsh transition from white to RGB, but since the pre-stage act turns the lights on in a snap, that objective is failing.

I don’t know if this is a firmware bug, a driver bug, or simple user error, but I’ve tried this every way I can think to, so perhaps someone here or @EricM_Inovelli can weigh in if this is just expected behavior.

This is a dead simple rule-machine rule that consistently reproduces the issue … if the lights are off, and I just run the actions, they flash on, and go back of. 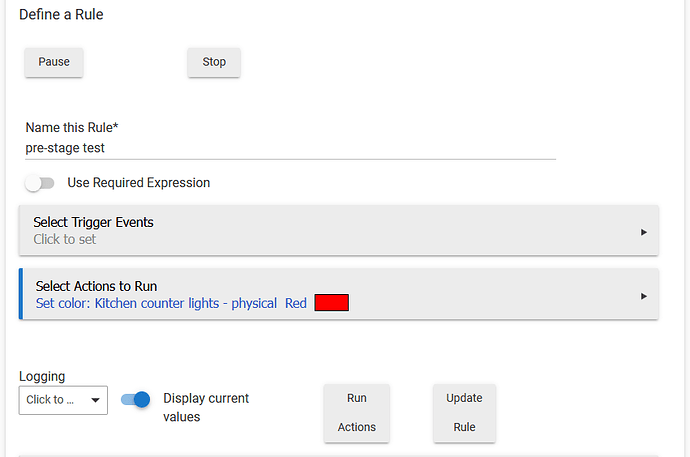 Bump
Any input at all?

@krisk got it working in HA. I don’t know hubitat but maybe you can figure out something from the thread.

Does the value of the “switch” attribute under “Current States” on the device detail page update as expected? Enabling debug logging for the device and looking at Logs might also give you more clues. Also, does the same thing happen with “Set Color” from the device page, or is this a Rule-specific issue?

That being said, I hope Hubitat standardizes this command some day instead of using a preference, which changes the behavior of the standard command and can mess up a lot of apps that use it. The LIFX drivers added a “Preset Color” command that isn’t official yet, but I assume it’s the direction they’re moving in, and it may help with some things like this too…eventually.

I’ve played a lot with this, and I believe this is a driver bug. When I use the same code and such with an LZW42, everything works as expected … I’m only seeing this behavior with the LZW45.

An early revision to the driver added the pre-staging option, while later versions also made color changes … could there have been an unintended collision, maybe?

I’ve played a lot with this

Did you check any of this then, by chance? If not, I’d see what happens because it should provide more clues if there is a driver bug:

Does the value of the “switch” attribute under “Current States” on the device detail page update as expected? […]Also, does the same thing happen with “Set Color” from the device page, or is this a Rule-specific issue?