The inovelli webpage for the LZW45 sends you over to the LZW42 bulb for hubitat. Has anyone setup one of these units yet and do we use the driver for the LZW42?

@Sky320 provided the link. You definitely do not want to use the LZW42 driver. The LZW45 worked great (although I set mine to update to the latest 1.20.3 firmware and it is taking a nice long time about it… maybe in the morning it will be done).

I thought the 1.20.3 was the final release and would be firmware 1.20. @Eric_Inovelli @EricM_Inovelli Can you confirm if the Beta firmware ended up being the “final” release for everyone’s new strips?

It is still upgrading though… So far, after more than 12 hours it is 72% complete (but still actively reporting in the log each chunk) so it does not appear to have stalled, just taking forever. Not sure if this is a “feature” of S2 Authenticated security or not. Moved my hub closer (it is on a really long ethernet cable, with PoE) and that really has not helped (seems to take ~13 seconds per Firmware Update report).

Can confirm when I upgraded to 1.20.3…maybe a little longer than 13 seconds, but definitely quicker than two minutes…and definitely 12 hours.

Quick couple questions for you:

Can confirm when I upgraded to 1.20.3…maybe a little longer than 13 seconds, but definitely quicker than two minutes…and definitely 12 hours.

FWIW, I flashed my controller many times during testing. In my case, I used the PC Controller with a USB Zwave dongle. It never took longer than a minute with the controller several feet from the dongle.

I realize this is a different method, but if it’s taking that long (12 hours and counting) then something is either going wrong or it’s time to find another way.

I was updating from PC Controller and an external USB Z Wave stick that was included into the Hubitat network.

I was standing with my laptop about two feet away. This is why I chose to use PC Controller and an external device.

If you moved your hub, you may have to “Repair” the Z Wave as it will use the route it uses when you included; so it may have some extra hops even though you’re closer.

@Bry:
I did not want to change anything about how I was doing it UNTIL it finished (one way or another). I also do not have a USB Z-Wave dongle set up on anything. If I cannot get it working this way I will probably set one up.

@harjms:
I did not want to do any repairs while it was in process. It ended up failing (over 24 hours total). So now I can do a repair and maybe try again. Seeing if bcopeland (on Hubitat) has any recommendations or things he wants me to check before I change things too much.

I did not want to change anything about how I was doing it UNTIL it finished (one way or another).

Yep, you absolutely don’t want to kill it in the middle! Just a suggestion for down the road!

Retried it with the hub within 2 feet and after a Z-Wave repair (just to make sure). Took a little less than 30 minutes and failed again. But I will bring that up separately and not fill @pbarlow’s thread further. Sorry about that.

I’m trying to remember if people were having issues using the updater tool in Beta. Let me check.

I didn’t have any problems using the updater tool with the C4 or C7 hub. Granted the C7 hub only had one device on it, so not exactly a fair test. 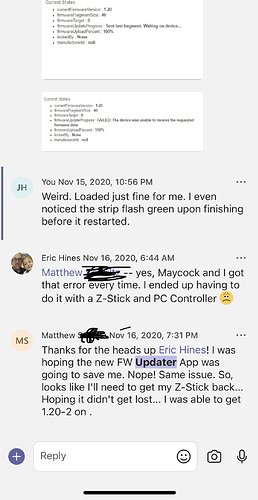 This is what I was remembering.

I thought the 1.20.3 was the final release and would be firmware 1.20. @Eric_Inovelli @EricM_Inovelli Can you confirm if the Beta firmware ended up being the “final” release for everyone’s new strips?

Yes, confirming the 1.20.3 became the final firmware that was put on for production that became 1.20, so you shouldn’t have to upgrade anything

EDIT: I didn’t realize we still had 1.20.2 & 1.20.3 up in the firmware file site – this was for beta testers only and we forgot to remove it. Sorry for the confusion. Please keep the stock firmware on the lighstrip as it’s the latest.

This is what I was remembering.

Yes, this is exactly what happened – Idk that we ever found a way around it – @EricM_Inovelli?

@Eric_Inovelli:
You might want to make a note about it if anyone looks to update theirs. The device says it is 1.20 right on the device page for Hubitat, which seems like it would be lower than the 1.20.3 that it supposedly is. Combined with the older firmware in the directory (including 1.20, no .x) it will likely lead to issues.

So the likely cause of my upgrade failure is that it was trying to load the exact same firmware?

It should be fixed now and removed from the site :).