Thinking I’m gonna have another one around the kitchen island.

Looks awesome! Love #45 - Rainbow Aurora. I have that on non-stop at my house!

How many controllers are you using? I’m wondering if that chasing effect can be accomplished with 2 controllers

Great question – as of right now, there isn’t a way to sync two controllers

Can I ask how you mounted the strips? Did you use the tape backing or some type of staple?

Awesome job with the videos! You should record a video with the main lights out

I look forward to a follow up with the island upgraded

The strips have 3M tape on the back of it. I imagined he used the tape.

@erwinfj thats currently 1 controller. I will have a 2nd one around the island.

@letchcj I used the backing tape that came on the strips

Got the strip installed under the island. New pictures and video at top of original post!

Light strip: Am I the only one having issues setting default color past 99?! Digital Lounge

Cant set it past 99 through the OZW 1.6 GUI or through a parameter set call. Am I the only person who has this problem? Is this just a OZW 1.6 issue? Is this an XML issue? (I checked the maxiumum in the xml and its above 99) [image] 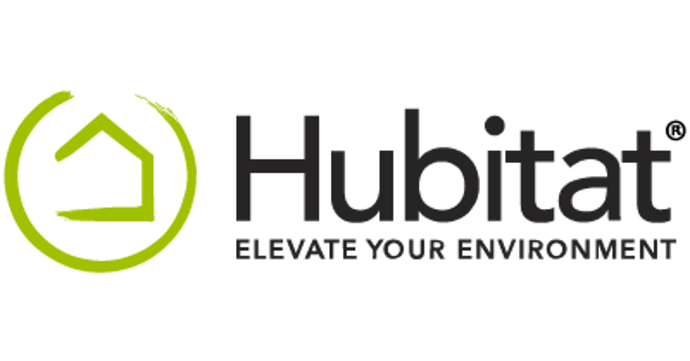 Hubitat Elevation™ is a local, reliable, fast and private home automation hub to connect your smart devices. Elevate Your Environment™ with the solution that is not cloud-dependent. Shop now!

Im too far into Home Assistant. The wife would literally kill me if I started all over on Hub! lol

Lol I feel ya.

Likely a dumb question, but how did you deal with the gap over the sink? Do you have two strips?

Also, is it recommended to put the light strip underneath something so it’s soft lighting, as opposed to directly overhead?

Also, is it recommended to put the light strip underneath something so it’s soft lighting, as opposed to directly overhead?

Do by directly overhead to you mean a position where you are looking at the LED strip directly? It’s matter of personal preference, but I think the best implementation is where the light is washing a surface. If the LED strip is going to be exposed, you might want to consider putting it in an aluminum channel with a diffuser. 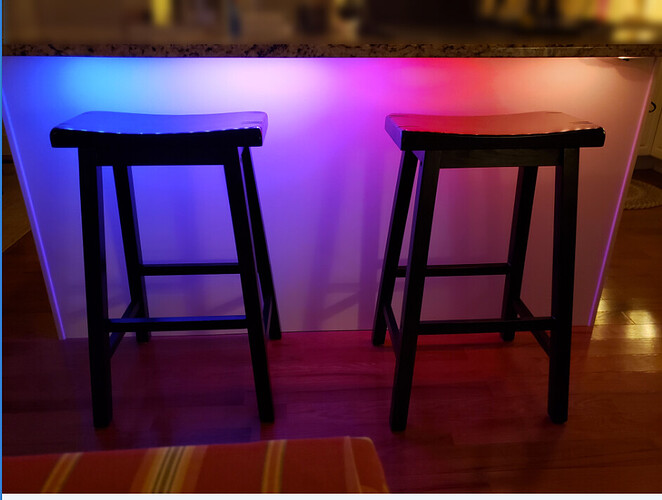 @nupdogg86 I soldered two extension together and hug the frame of the window. As Bry said, personal preference. Quite a few of the pre-programmed “pixel effects” dont show good the way I have it, but if you could directly see the strip, those would look better. 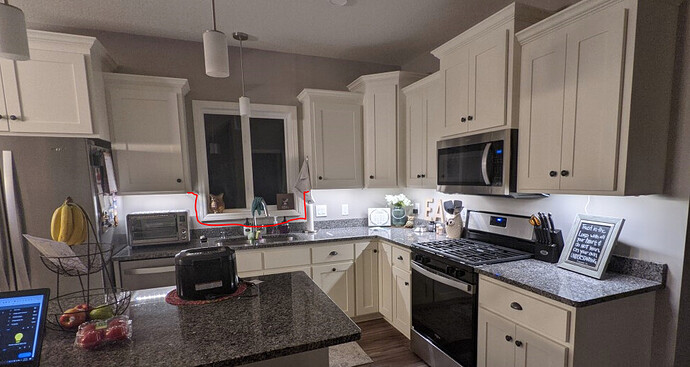 @Bry took me a while to realize that wasnt my island, lol. I was like, “how did he get a picture of that angle?” But not even the same counter seats lol.

That’s exactly what I was asking, thanks!

Thanks! That’s a great idea.

I was actually going to post a separate question on syncing multi-controllers to create the light chasing effect that would seamless “jump” to the next on contiguous strip. My kitchen layout is similar where I can’t have a long contiguous strip and I would love that effect.

By the way, your kitchen lighting is so awesome!

You’d almost have to time it and setup an automation. So start strip 1, you know it takes 5 seconds for the light to reach the end of strip 1. Then trigger strip 2 to turn on and 1 to turn off.

But your handicapped by Zwave transmission times which can vary a few seconds, so i dont really think it would work that well.

Hi @nappyjim,
This looks great. Thanks for sharing. You layout is almost the same as mine and I’d love to pick your brain on the details.

I just used two extension cables, in blue. Aside from that, its just the actual light strip sections.

I mounted the controller on the underside of a cabinet and plugged it into outlet thats hidden by a picture frame. In red circle, you can kinda see the cord hanging down. 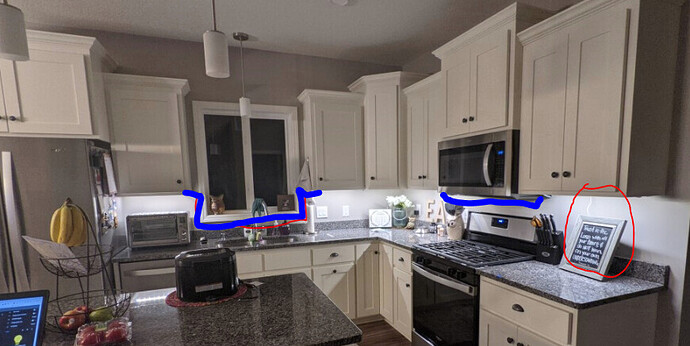 Did you use any L’s or T’s. Since there are no Left-handed L adapters and I already broke a pin on an extension I am trying to be conservative in my approach.

One good thing for me is that I’m doing this as part of a kitchen renovation so I won’t have to take down anything to hide the wires.

Sorry I missed this question. I used L’s. For the left hand turns just flipped the L over