I recently had my basement remodeled. I have one light to convert to an Inovelli switch and I can’t figure it out.

My issue is figuring out how to get neutral to the bottom of the stairs where the line comes in. Can I just use a neutral from the other switches in the 4-gang box? Those go to a separate breaker though and it feels dirty. Lol.

Any tips you can give would be appreciated! More than happy to send pics or whatever.

My issue is figuring out how to get neutral to the bottom of the stairs where the line comes in. Can I just use a neutral from the other switches in the 4-gang box? Those go to a separate breaker though and it feels dirty. Lol.

Dirty or dangerous, yes. I would not recommend that.

Can you draw out the wires going between the 3 boxes?

My issue is figuring out how to get neutral to the bottom of the stairs where the line comes in. Can I just use a neutral from the other switches in the 4-gang box?

So a couple questions before even addressing the stealing a neutral part. In an ideal situation, where do you want the Inovelli, upstairs or downstairs? Unless the answer is downstairs, why are you trying to get a neutral to the downstairs box.

Also, when you said “The load is coming out of the top of the stairs outlet” you meant the other switch box, right?

Yeah I’m gonna work a bit harder on figuring out the junction box and existing wiring and then I’ll sketch it out. It’s all buried and hard to get to, unfortunately.

I don’t care where the Inovelli is. I just want the other side to work with a dumb switch or even an six switch.

Yes sorry I meant switch, not outlet. Line comes into switch on bottom of stairs and load comes out of switch on top of the stairs. At least I think so. Lol. The junction box and inability to easily tell how everything is connected makes things hard here.

Correct. At the bottom of the stairs, the switch is a single 3 wire cable coming in. All are hooked up. Black to black and the two travelers to the silver screws.

I believe the power is technically coming into the junction box. That’s what’s confusing me. The junction box with the power fed to it appears to be in the middle of the two switches.

This is the junction box. The blue coming in from the right goes to the bottom of stairs switch. 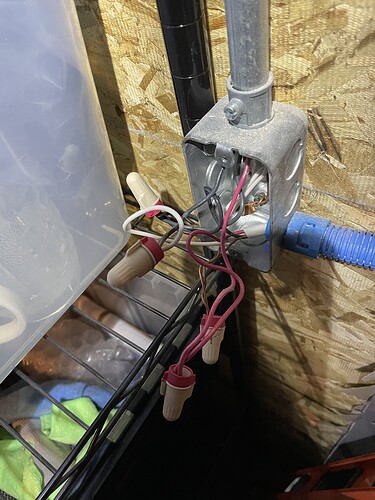 I think you may be right though. I may have been looking at this whole circuit backwards. I bet the line and load are in the same box. I’m gonna dig into that one a bit and see.

So upstairs there are two common possibilities excluding power to the light. The key is to see how many Romex are “involved” at the upstairs switch.

If you have a line and load in the same box, then you’ll have two 2-wires and one 3-wire.

If you have a load in the middle, then you’ll have one 2-wire and one 3-wire.

That being said, I looked at the junction box pic. I’m not sure where this fits in the order of things, but I see a black to white connection. When you see this at the light box (which it isn’t but it could be feeding) that suggests either a load in the middle OR power is being fed to the light first.

An evaluation of the wires involved in the upstairs box will help narrow.

Will do. Yes, this is extra complicated because it was retrofitting a full basement remodel into existing wiring. I’ll look and report back!

Ok, so at the top of the stairs there is one 2-wire going up to the light, one 3-wire for a totally different circuit, and then the 3-wire for the circuit I’m dealing with.

For the 3-wire I’m dealing with, the black and red go to the traveler screws and the white wire is connected to the white wire going up to the light. The black wire from the light is going to the common/black screw on the 3-way switch.

So, it does sound like power is getting injected into the circuit from somewhere else, like that junction box, doesn’t it?

It’s worth noting, that second 3-wire is a different circuit, but on the same breaker. It used to be a 3-way for a series of ceiling lights that aren’t being used anymore. The other 3-way in that circuit was swapped out for a single pole switch. The black and white (hot with electrical tape) were combined to complete the circuit and the red cable was capped off and tape as it also had power supplied to it within the box at the fixture. So those old ceiling lights are now controlled by a single switch on the other side of the basement.

Ok, so at the top of the stairs there is one 2-wire going up to the light,

We are going to have to do this in pieces. I didn’t get that whole last paragraph, but tbh if none of that is presetly involved with the current switch leg, I’m going to disregard it for now as it will just make my head hurt.

Do you have a meter to test? Proximity probe won’t do.

Upstairs, remove the 2-wire temporarily so it’s not connected to anything, Using a meter, test between the black and the white to see if you have 120V. Just to be sure, test with the basement switch in both positions.

One of those three should have 120VAC.

Ok I disconnected the light from the equation. There is no voltage between either the white or black wires going to the light anywhere.

I tested the 3-wire and there is 120v between white and black and black and ground when the bottom switch is in one position, not when it’s in the other position.

You tested the 2-wire going to the light and no voltage . . black/white, black/ground and white/ground. So that tells us power isn’t starting at the light.

The basement switch have all three conductors of the 3-wire connected to all three terminals on the switch, so power isn’t starting there either.

So I think the only possibility is that power is being tapped from that junction box. Can you trace the 3-wires from each switch box. Do they both meet at that junction box. At least the downstairs switch 3-wire does, right, as you said that’s what is in the blue conduit.

Correct on the light testing. Nothing there.

Yes, the basement switch is using all 3-wires. I will dig into the junction box some more and try to figure out whats in there. What’s the best way to tell if the wire in the box upstairs is in fact the same wire I’m looking at in the junction box? I suppose I could use my toner or a continuity tested, but wondered if you had any other methods that worked well.

Ok so there are 3 wires coming into the junction box. One 2-wire (presumably power) and two 3-wires. One goes to the bottom switch and one to the top. Verified using my toner that the 3-wire was in fact going up to the top switch.

As far as the 2-wire goes, the black is going to the white wire in the bottom switch. The white is connected to the white from the top switch.

Yes, you are correct.