Problems With Red No Neutral Dimmer

I have a switch that controls a fluorescent bulb (tube style) that I replaced with the Inovelli Red switch. As per the documentation, it said that if the draw was less than 25W that I needed to add a bypass, which I did. The switch will turn on the light at a very low level and never, ever, turn it off again - it stays on perpetually.

I opened a ticket on this in April and never heard back (nor on the four subsequent request made). I also couldn’t log into the site until today (even though I had an account) because of some issue that customer service finally told me about this morning, and gave me the work-around to fix that.

So here I am with a switch that doesn’t work and it’s been so long I don’t even recall the precise way it was wired, all I remember is that it never goes off and I ended up just pulling the bulbs out and not having a light for eight months.

My hope is that someone has had this problem and figured out the resolution to it so I can finally get this light working again. I use Home Assistant and did try to make some parameter changes to overcome the problem (such as turning off dimming), here are my settings: 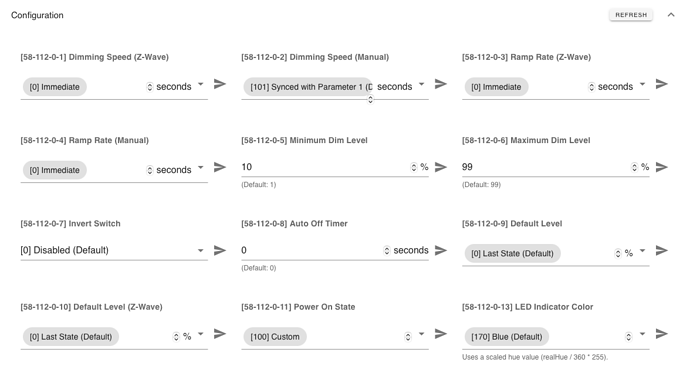 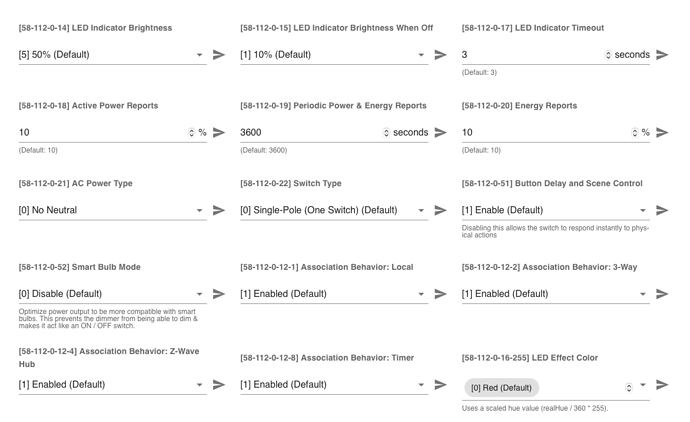 Do you have a switch or dimmer? Title says switch but you mention dimming in your post?

It is a dimmer, sorry for not clarifying that better.

Got it. I should have figured since you saidi non neutral. Switch is neutral only.

Are you sure the fluorescent light is dimmable? Most are not. Especially if they have a ballast. You could try setting param 52 to on/off. You might need to upgrade the firmware to get that option.

Yea, that is what I was trying to achieve, is kill the dimming option and I changed several parameters related to dimming to see if I could disable it entirely. My light does have a ballast so I know they cannot be dimmed and, in fact, I put the bypass on the light because the required wiring wasn’t present at the switch, to try to get it working.

I wasn’t aware there is a firmware update on this switch, I’ll have to hunt around for that and see if I can flash it.

Any thoughts on what I should answer in this dialog for updating firmware? 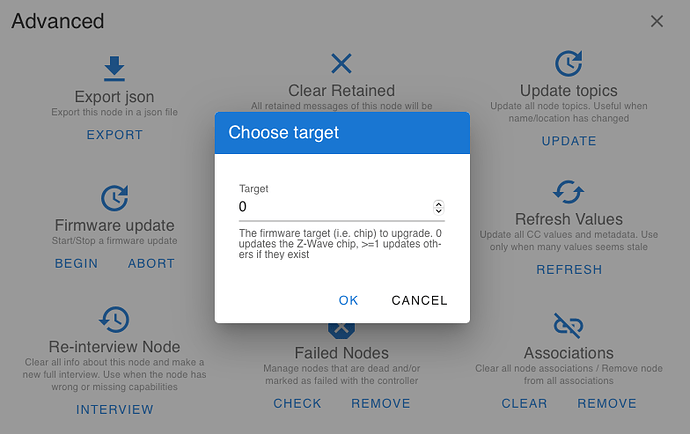 You might want to look at wiring for a neutral installation and then removing the ballasts to swap out for LED tubes. I’m not sure what LED tubes, if any, the Inovelli dimmer supports, but a switch (with a neutral) will work. I’d consult the bulb compatibility app (under development) to see if LED tubes have been reported to be compatible.

Switching out the fluorescents for LED’s was my first course of action and it didn’t work (this was before the Inovelli). My plan was to eventually just rip the light fixture out entirely and put up LED can lights and patch the ceiling but since that’s a fairly huge job (2,000 square feet of ceiling to upgrade) I was hoping a no-neutral switch would fix me up. Sadly, the way this was wired, I don’t have any choice of getting a neutral down to the switch without tearing into the walls.

And I answered my own question above, I just assumed 0 for the firmware and now am on the beta, perhaps this will make a difference.

I didn’t get any new parameters that lets me set the switch to on/off instead of dimmable in 1.61 beta.

I suppose I could issue a direct command but would need to know the parameter number (presumably 52), size and value to set to switch it in case the params aren’t properly being displayed in ZwaveJS.

I did, but what I was missing was the second .bin update, once I did that I can now see it. Thanks for that tip, that’s really cool and now I’m having fun just upgrading the FW on all my Inovelli switches

Never heard someone describe upgrading firmware as fun . . . glad you got it going!

I got the firmware going, but whether or not it fixes the original problem remains to be seen.

Yea, and I’m noticing the switch is very warm to the touch, I’m going to yank this switch out tomorrow - I’ll be curious to see if it has problems on a regular light now that you said that.

I haven’t had a chance to switch lights until yesterday and I think I might have a bad switch because it never turns entirely off. On a non fluorescent light turning it off just dims the light to about 2% but never goes off, even after a factory reset and downgrading the firmware from the beta 1.61 to the production 1.57. It makes me wonder if the switch was bad and that’s why the fluorescent light was such a problem (and why it got so hot, which it doesn’t do now) or if the light somehow messed up the switch. Kind of afraid to try another Inovelli switch on that fluorescent if the light itself is causing the $50 switch to go bad.

because it never turns entirely off. On a non fluorescent light turning it off just dims the light to about 2%

I can turn the switch on and off from Home Assistant and the paddle but the internal relay does not flip the switch.

What do you mean by “the internal relay does not flip the switch”? You said that you can turn the switch and off from both HA and the paddle, so what is not working?