Right now two products like this exist: Leviton and Eaton/Cooper. Both cost $100 and both have mediocre reviews due to trying to control devices directly (from what I can tell).

What’s missing is a good quality, modern design, single gang scene controller with 6 or more buttons. Something that understands what it is (talks to hub, nothing more) and isn’t (a thing used without a smart hub, or that will have any idea what its LEDs should do other than what hub tells it to do).

I’m thinking of a design like the old Enerwave ZWN-SC7 or perhaps this thing or maybe the Lutron Pico keypad.
The switch would come with a few interchangeable keypad faceplates so you could configure it as one huge button, two very large buttons, four normal buttons, 6 smaller buttons, etc.
Switch would also come with stick-on labels that blend nicely with the switch.

Most importantly- there would be no ‘off’ button or ‘dim/bright’ buttons like Cooper or Leviton. Just buttons that activate scenes, ideally each with their own LED which would be controlled solely by the hub.

Note- this would NOT have any inbuilt load control. Just hot/neutral/ground for the thing to power itself.

Something like this would add flexibility for use cases like fans- just snap on the two-button faceplate, set both to toggle mode, and use micro modules to actually control the fan and light power.

details:
What you’re talking about is extremely close to https://smhttp-ssl-40934.nexcesscdn.net/specsheets/lvsw-108-xx.pdf (which it a low voltage switch that only can be used together with relay panel).
I was searching for scene selector like this forever and only was able to found extremely expensive(100$+) or discontinued products. I liked this type of switch so badly so that I almost decided to rewire my house to support it.
in any case, that link above has a good foundation work for interchangeable buttons concept can work. Obviously implementation for z-wave will be pretty different from this low voltage switch.

The inovelly red relay light switch with support of single click, double click and etc for scenes is closest so far that I was able to find. Having dedicated button per scene would make my experience much better!

Agreed. The problem with multi tap is it’s not intuitive or discoverable for someone that didn’t program the thing. Short of putting a sign next to the switch like ‘tap switch once for light, twice for fan, three times for heat, four times for all devices at once’ there’s no way for someone who just walked up to the switch to control those other functions.

Multiple buttons, especially if they are labelled, makes that easy.

Eric and I had a good conversation about this and needing the ability to switch something on or off when there are no unused switches in the gang. Here is what we talked about, a pdf I put together, and some use cases. 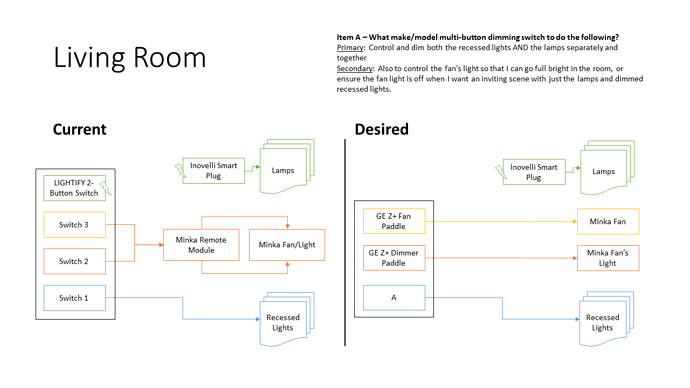 Finding the right hardware for Lighting Control in two rooms

Yes, thanks for breaking it down for me 🙂 This should be fairly simple and we’re creating something similar in terms of fan control in a single gangbox, so we may even be able to use the same PCB board for this project, so that would be great.

Yes yes yes! Your PDF pitch is exactly what I’m talking about. I would buy a few of those in a heartbeat.

The cool thing there is for any sort of combo device, you can just go to nano modules (Aeotec etc) and put the control module up in the fixture. Thus it doesn’t matter if you have a device that’s a fan / light / heat / blower / RGBW / intake / exhaust / toaster / broiler / coffee / espresso / alarm combo, you just put as many nano modules as you need in the wiring box(es) that power it and you can control everything in one single gang Decora plate.

And that same single Decora plate can run global scenes like ‘all lights on’ or ‘I’m home’.

For example (my use case, as @Eric_Inovelli was asking in the SmartThings thread)- in my bathroom I’m going to install a combo device that’s fan/light/heat. I want to control all 3 things without needing 3 gang spaces. This does that, AND controls the existing mirror light.

Or, next to my front door there is a two-gang switch box, one switch controls the above door light, the other controls an outlet / plug in lamp. With a device like this I’d put the outdoor light on a single Z-Wave switch or dimmer, then hardwire the outlet always on, and put this control module in its place. The lamp would then either get a Z-Wave smart outlet or a plug in dimmer module.
Result- I can turn on/off the lamp, but also have one button for ‘we’re leaving’ that turns off all lights and controllable appliances, turns off heat/AC, and locks the door after 30 seconds. Have another button for ‘we’re home’ that (based on time of day) turns on lights, adjusts heat/AC, etc.

Furthermore, occupancy detection is something HA often struggles with. If there’s a clear ‘I’m Leaving’ and ‘I’m Home’ button, those can toggle a global state variable for the whole system, that other things can benefit from.