Hello folks! Two weeks in to both Inovelli and Hubitat, so this is a learning curve issue (I think. Yeah, I’m pretty sure it’s just me…). I thought this was a simple one, but it’s driving me a bit nuts.

I just installed 20 Red Switches (LZW30-SN) throughout the house. I’ve got the LED notification lights set currently to different levels based on on/of status (100% on, then either 20% or 30% depending on the room, bedrooms are 20% when off, other rooms are 30% when off). All are set to Blue, for now. Using the Device settings ‘LED Strip Color’, ‘LED Strip Intensity’, and 'LED Strip Intensity (When OFF). I do have the LED Child Device enabled as well.

I had used Rule Machine to do this, but quickly found that it didn’t do entirely what I wanted.

Shy of building more Rules to switch the LED Child back to Blue, is there an easier / better way?

In the rule do you use the else-if function. The rule must tell it to return to normal state i.e. day / eve. If this is not built into the rule the hub does not know to return it to blue.

@Sky320 Am I right in using the Child device for the switch to do this, or should I be using the Parent device? I’m pretty good with Else/If stuff (in Excel…), but I’m still learning it in HE. I’ll play around some more. Thank you.

I use the child devices (that show up after assigning the notification). then I use that notification in my rule machine. 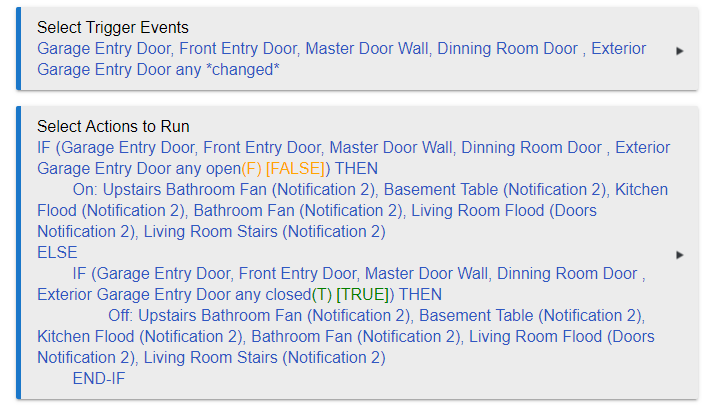 image702×409 17.7 KB
this is my rule it’s long but works very well for me. The only this would be adding to run only when in certain modes. hope this helps and to answer your question yes use child devices for each notification created.
harjms November 12, 2020, 6:31pm #6

To make it easier for me (for future), I took all those child notification devices and combined them into a Group.