I captured a video measuring the voltage of the line (first 4 seconds) and then the load (last 7 seconds). It looks like the switch is doing something funky in between passing the signal through.

One more update for tonight, if I dim it to be approximately 80% turned on, I’m getting 100% of the output from the lights without the flicker.

I have a red series dimmer that is flickering at like 50% - it does it randomly.

Thanks for the tip. I ran into the same issue at 100%. I set min/max to 30/80% and now my crappy led bulbs are working better. They still flicker while turning on, but settle down quickly now.

@EricM_Inovelli I’m having some bad flickering issues with the new dimmer I just received (Red Series). I have neutrals and a GE switch. It’s running two fixtures with 3 x 8W Sylvania, dimmable Type A bulbs in each (so 48W total).

The flicker isn’t constant but random. I tried some other Philips bulbs I had and they exhibited the same issues. I threw in the old Inovelli dimmer I had and it works fine. I’ve checked all of the parameters and they look to be fine as well.

I had a random flicker.
In a neutral and load-only configuration using Hubitat

I lowered the max level and that seemed to make it happen less frequently but not gone.

Last night I changed the config to non-neutral and 3way momentary
waited for that to clear the logs and then set them back to neutral and load-only
I have not noticed the problem since.

That is interesting, @feens, could you try this to see if it makes a difference?

Well…at the suggestion of your support I had ordered a new switch and am about to return the old one (the new one worked fine).

I do have the old one sitting in the box still as I haven’t had a chance to send it back to Amazon (I’m in Canada). If it’s of significant use to you, I could try that out, but it means puling out that switch again which is a bit of a pain. After reading this, I actually considered trying it on another location and just keeping it if it works (I’m guessing it just gets tossed if I return it, which is a bit sad if it was just a firmware/config issue…and I had to take the tabs off of one side because)…but I don’t really need it, as I already have smart dimmers in the locations I need…but it would replace a less fancy one.

I recently bought 3 Red Series Dimmer to replace 3 non-neutral single pole dimming light switch. After installing them, 1 is working correctly, 1 flicker when exceed 80% power (but brightness seems to be close to 100%) connected to 5 LED recessed lighting bulbs. The last one is connected to 4 recessed lighting bulbs and will leave light on at a dim level even when it is set to off. If I try to turn it on, it will slower raise brightness then shut off after reaching near 100% with a flashing red light.

*All 3 went through the same wiring insert step 5 instructions

@Pekboy - Set switches max value to 80%. For last switch that is still dim even when off, install the bypass between line and neutral at one of the lights.

@harjms Thanks for your reply. I’m running 4 * 8W bulbs, which is well over 25W, why do I still need a bypass?

I followed your instructions and ordered a bypass but found it to be very difficult to get to any wiring behind the recessed light fixture. Is it possible to install the bypass behind the switch?

Update: I think I found my answer in this video https://www.youtube.com/watch?v=X65KC3Nf35A . I will install the bypass behind the light switch.

@Pekboy - Believe me if I knew the answer, there’d be a redesign. My cabinet lights are running over 36 W and I’m using a neutral. Just something about the LEDs I’m using just remain on with the smallest amount of voltage.

Yes you can install behind switch. Mine was easier to install in light because of all the other switches and wires in the 3 gang box.

@harjms I still can’t turn off my light after installing the bypass. Am I installing it correctly?

The 2 black wires on the left is the Aeotec bypass. 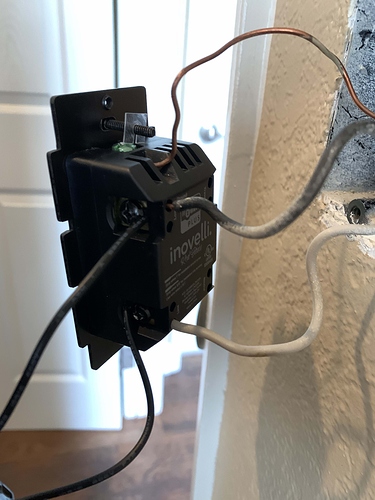 When the switch is in off mode 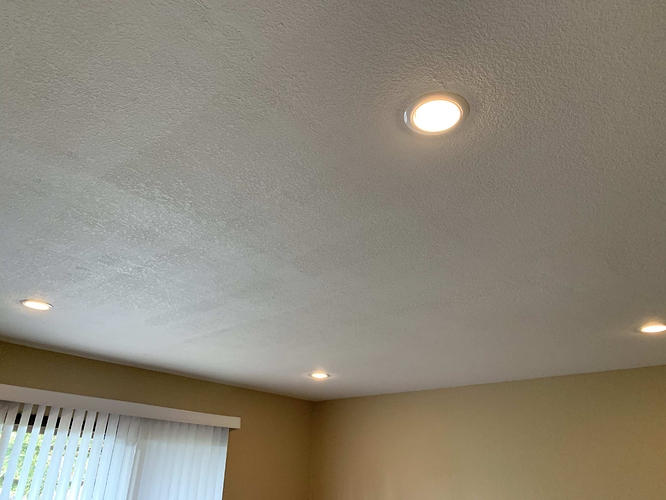 @Pekboy - Good news, you didn’t install it correctly this is why you’re still seeing the light. Bad news, you don’t have a neutral here and will require it to be installed where there’s a neutral. The bypass installs between the load and neutral.

@harjms I suppose that means I won’t be able to install this switch without a neutral wire.

@Pekboy - Can you not pull one of the can lights down? Mine pull down vertically.

I’m having this flickering problem occasionally with one of my lighting circuits, using Hue bulbs. I usually turn off the circuit and come back later and it works fine. Is there a known fix for it? Haven’t had a chance to play with min/max ranges.

I’m haivng this same problem, so interested in the outcome. I’ve solved it for now by putting an incandescent bulb (75W) into the load.I’d love to figure this out as well given that > 30 watts is still having problems.

@harjms Yes, I can pull the light out vertically but there is no easy way to access any wiring unless I cut it open. I’m not handy at all so I don’t want to risk creating a fire hazard. It’s okay, I’ll just use the switch in another area of the house and leave this room as is for now. Thanks for your time.