Scenes not working on HE

Hello,
I recently converted from ST to HE, and can’t get the scenes to work. I’m using the Inovelli device driver (v2020-08-12). I’ve tried to use the Button Controller built-in app as well as the Rule Machine, but they are not being triggered. Are there specific settings within the device preferences that are needed?

Can you show me an example of your rule? Also, which Hub are you using? C5 or C7?

I’m using a C7 with the latest firmware, upgraded this morning. I was having an issue before the firmware update as well. 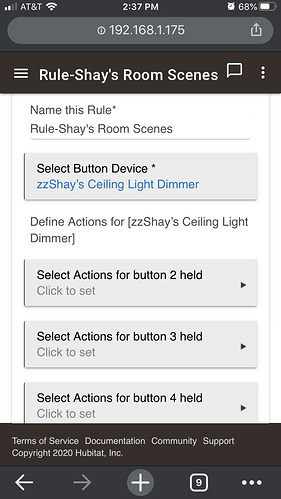 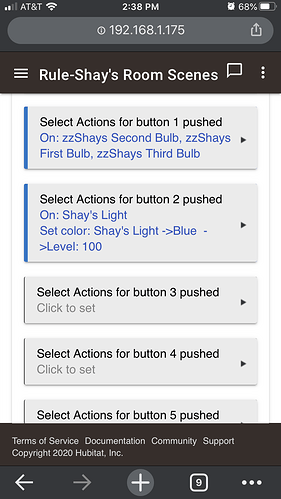 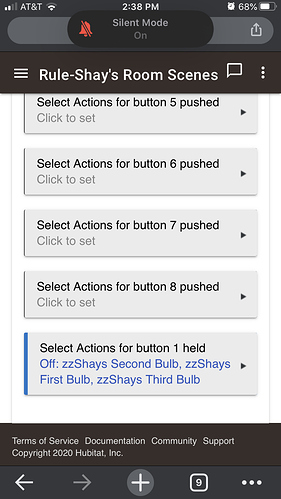 I’m not at home right now, but I’ll look more closely upon return. I’m also having some issue with my scenes on my C7 hub. C5 hub didn’t nearly have as many missed scenes. I’m using rule machine to configure mine. They mostly work, but some have issues triggering all devices.

If your switches are connected with S2 security on the C7, you will want to check the device log to make sure that the pushed and held events are being reported. There seems to be a bug when using the Inovelli drivers (and until Hubitat 2.2.3.132, also when using the Hubitat driver) where events are missing.

Thanks for the link, great detail that you provided! I’m still only a few days into HE, so this may be a rather basic question. If I exclude the dimmer and want to re-add without S2, do you know how to do that? Thanks.

You can do that, but the bug was just fixed! Everything should be working once you update to the latest version. See the linked thread for details.

Here’s what my rule machine looks like. I’m updating to .135 now and will report if I experience any issues tonight. 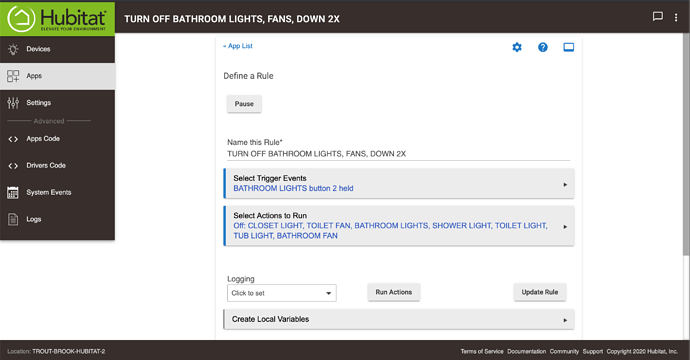 I then tried to exclude the switch and repair without S2. The scenes are still not working on that device.

I thought that maybe I had the Invert Switch setting turned on, but it was off. I excluded the switch and dimmer, then shutdown the hub and unplugged it for a few minutes. Started it back up, re-paired without S2 again. Set the drivers to the Inovelli ones, and recreated the scenes in the Button Controller app. This time it worked as expected for both devices.

Not wanting to mess anymore with those two devices right now, I excluded and re-paired another red series dimmer WITH S2. Even with the latest HE firmware released today, the buttons are still not working to trigger the scenes. I’m not sure if others are also having an issue, but wanted to share my latest results.

I’m seeing the same issues. I’ve installed 3 switches and want to use button 7 for a trigger. I can see that button 7 is being pushed in the Hubitat logs, but it doesn’t trigger anything.

I just switched to HE. I have about 10 dimmers and 1 switch. Pairing seems wonky, some are S2, some are without. It is very inconsistent. In the middle is an Aeotec Range Extender 7 (not sure if that will make a difference).

I have a few scenes, they all sort of work… I say sort of… 1 of the switches, is only supposed to turn of the lights in the same room (1 dimmer, 1 switch, 1 zooz switch)… but it turns off every light on a zwave switch in the house… kinda weird.

Hey did you ever find a fix for this? Curious bc I’m experiencing the exact same thing on my C-7. It’s only with button 7 though, which is strange.

I excluded and reincluded them and they mostly work, they can be flaky. I used S2 for three out of seven switches. I don’t get much usage with button 7 on most of them so I cannot give an idea of how well they work, except two that are S2. I’m thinking of taking them off the network and rejoining with non-S2 to see if that helps.

@Eric_Inovelli, I am loving the LED on your switches. They are wonderful for notifications.