You have a -SN Model right?

I am getting 3 mysterious looking panels after the color control:

When are you planning to add Edge support for NZW30 switches?

Should be this month or possibly early next. SmartThings may have a generic edge drive that they may switch it to after 10/15/2022, but I believe we will have our driver before then. To be honest, you might want to wait until they switch it over and then switch it to ours at that point so you don’t have to exclude / include.

Good question. I’m still trying to figure out how to do this without getting the device network address from the IDE . . . since the IDE is going away. I don’t have an ETA on this.

Good question. I’m still trying to figure out how to do this without getting the device network address from the IDE . . . since the IDE is going away. I don’t have an ETA on this.

Maybe follow the Firmware update procedure? You should be able to see the network ID then.

You mean by using a Z-Wave stick and PC controller? Viewing the network ID there?

You mean by using a Z-Wave stick and PC controller? Viewing the network ID there?

@EricM_Inovelli, I just want to thank you for the edge driver red switch/dimmer, working great for me. A lot easier than groovy/child device/smartlighting app, abc button manager for managing led notification and double pressed buttons. At least 1 positive about groovy going away.

On the other hand, I am still using an old outdoor double plug (Nzw97) with a groovy dth and child devices. I know it has been phased out for a while, I think it was replaced by another phased out nzw37. Any chance of having an edge driver (Inovelli or smartthings) that would work.

I have one basically created from working on the LZW36 (Fan + Light), because it is similar in that it is multi-channel, but I believe SmartThings has a dual channel edge driver already. So you should be covered, but if it doesn’t work for some reason, I can push one out there.

Nice, I like option 2 as there may be some devices that you want to associate with that are from a different manufacturer that may not add the network ID display custom capability. Option 2 will work with both Z-Wave associations and Zigbee bindings. 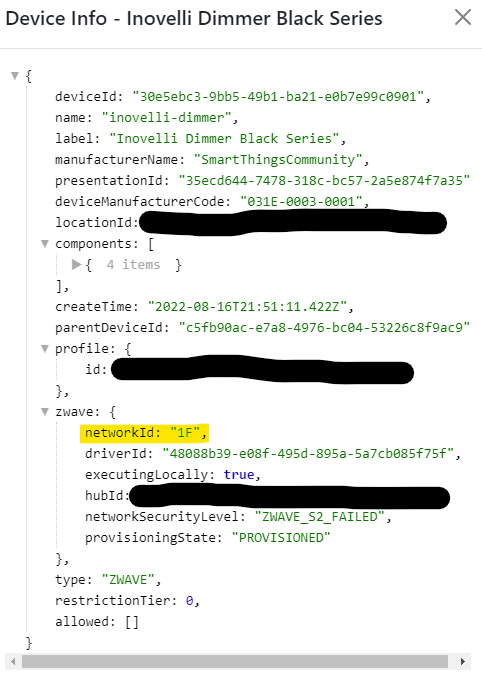 FWIW, another way of grabbing the IDs is to use the CLI. You can then parse the CLI output:

The benefit is that you wind up with all of your IDs in a list.

Open the csv in Excel and do a Text to Columns using â”‚ as the delimiter. It’ll wind up like this:

Hello. Found this thread and am happy since I have 6 red dimmers and 4 black switches. But I also have 6 LZW42 bulbs. Will Inovelli be creating edge drivers for this? Currently they’re using a generic “z-wave bulb” driver which limits the features severely.

@EricM_Inovelli just logging the request here for additional settings to be a part of the red dimmer card such that we can automate with them via routines:

P.S. for those that know my history, I am selling my home with the smart switches, so I am converting it all back over to ST for the new owners so I can take my HA with me and get a new shiny setup.

I also have 6 LZW42 bulbs. Will Inovelli be creating edge drivers for this?

Yes, this is definitely on the list. I have 12 LZW42’s in my house running SmartThings and need it too lol.

those bulbs are the best! can’t wait for them to run locally

btw, they seem to be more responsive than before, all after smartthings’ been doing these changes in the background lately.

Will work on adding those as I get some of these other drivers done.

I can confirm I am working on the edge driver, but curious about your statement that:

Other than the ability to have the bulb return to the state it was in before power loss, which features are you thinking of?

I have no control over color with the drivers mine are using.