Hi, I love what you are doing and hope you bring a complete line of well designed, affordable Z-Wave devices to market.

What is inovelli doing with indoor plugs? The link for indoor plugs on the main site results in a 404 error. And I can’t find much at all about them in the forum. Are you building one?

Hey @surety, great question and welcome to the community

I love what you are doing and hope you bring a complete line of well designed, affordable Z-Wave devices to market.

That’s the goal! It sounds cheesy, but our goal is to have the best products at the best value with the best customer support. We talk about this daily and strive for the best!

What is inovelli doing with indoor plugs? The link for indoor plugs on the main site results in a 404 error. And I can’t find much at all about them in the forum. Are you building one?

Whoops, yeah I need to clean those 401’s up. We had some last year, but when we switched manufacturers, we couldn’t sell them anymore as they were white-label products. I really did like the design of them. So, rather than leave them up on the site, I took down the pages (but looks like I missed a few links).

We are in the works on smart plugs, but we had to put them on hold so we could focus on the switch, bulb and sensor lineup.

Here is our initial mockup of what we initially presented: 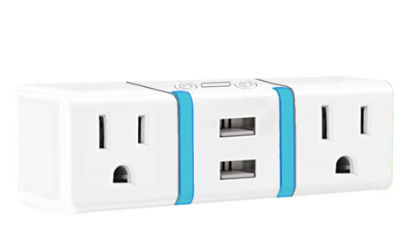 However, the problem we ran into is that the engineers were afraid it would fail UL as there’s a test that they do where they drop a steel ball against the plug and if the plug breaks, it fails. Since there are so many swivels on the plug, they were afraid the structural integrity would fail.

We want to solve for as many configurations as possible (ie: some people like the sideways outlets, whereas others like forward facing).

I think we may just stick with a small little smart plug to start things off (a white-label one from the new manufacturer) and then if we have the time and resources, develop something like the above.

So, that’s pretty much where we are in a nutshell! Hopefully we can get the white-label out early next year and then design our own later in the year.

Thanks for such a thorough reply! That makes sense.

I love how transparent you all are. We’re a home security company and our customers use Z-Wave lights, plugs and switches. We have a similar approach, based on transparency, engaging and respecting users rather than feeding them BS all the time which is common in the security industry. We even provide support much like you do.

I hope your stuff is compatible with Alarm.com and Qolsys. The security industry needs well designed Z-Wave electrical devices that aren’t overpriced. Our options thus far have been limited and expensive. With Ring and Nest in the game now, we need something better. Someone needs to shake things up and I have a feeling you might be it. Good luck! I’ll be following what happens on here.