The latter. Either a 2-in-1 or a red/black switch/dimmer.

so if i would like to control normal lights in the fan, i would need to either use 2 of these, or 1 of these and 1 2 in 1 for the regular light. nuts

If you currently have 1 switch controlling, you’d be best suited with the LZW36.

A third option could be using a fan switch to control the fan and wire the lights to constant power, then use the blue switch with no load attached and bind to smart bulbs.

i was hoping that this switch was going to be an in wall version of hte LZW36 so wouldn’t have to go putz with the fan itself.

Just for clarity. This is an in-wall switch that controls fan speed only.

Typically this is for if you have independent control available to you via the wall.

If you do not have independent control (ie: one switch to turn on the lights or fan in conjunction with a pull string on the fan) you would use our fan/light that requires the canopy module.

This switch is a completely different product than the fan/light and solves for a different scenario.

I can draw a diagram tomorrow if it would help with the confusion?

no confusion. i think there was a request for an in wall fan and light controller 2 years ago on zwave, and was hoping this was that, just with zigbee… to be clear i am looking for something like this, just with all the goodies. 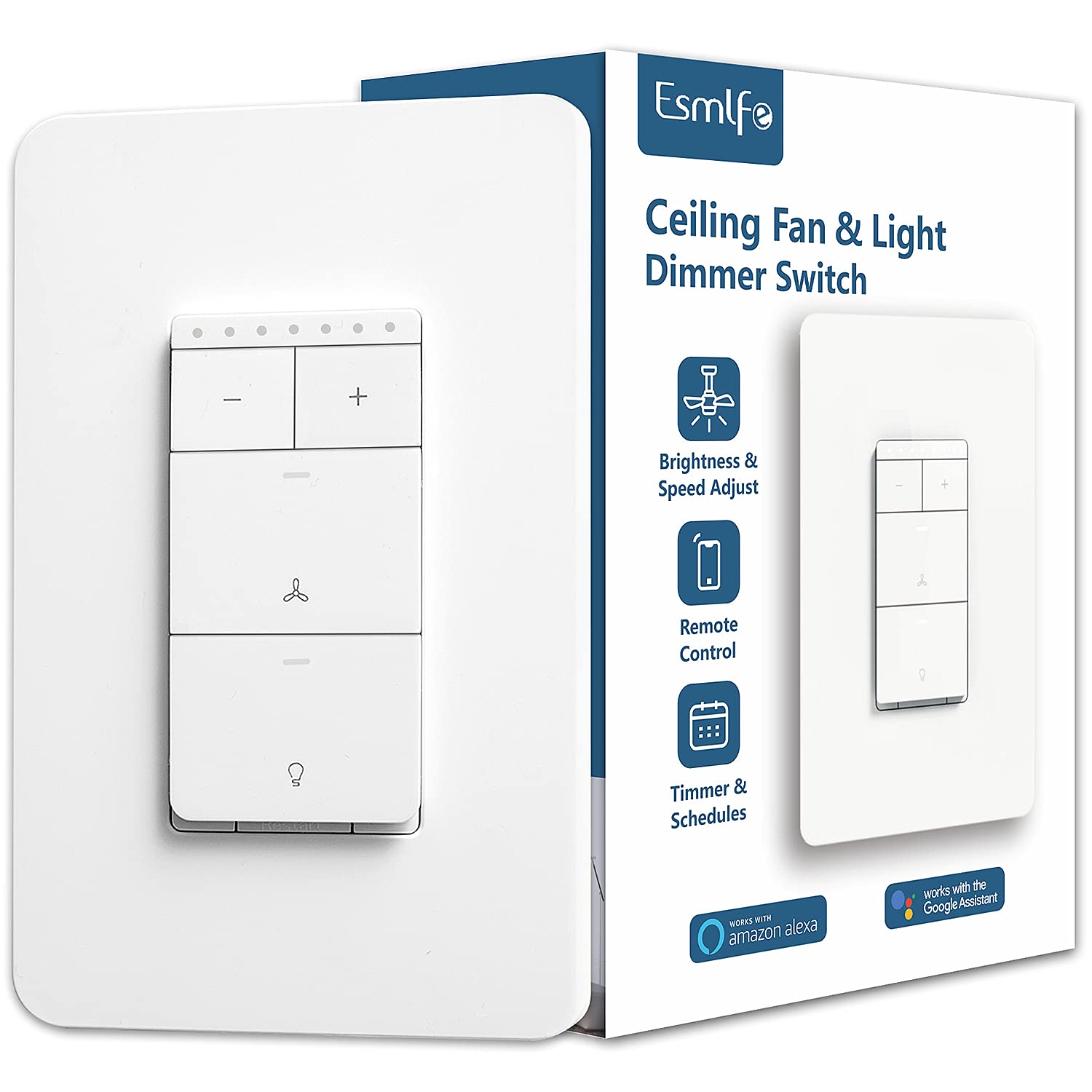 it will let me replace the 2 switches with one and place a bulb that can be dimmed in the socket as well, i just need to flash it so it doesn’t go talk to the cloud.

Ah, interesting. Ok, so looks like that solution is basically to create a single switch rather than have two separate ones.

Basically there are two different scenarios.

Scenario A has only one 14-2 Wire leading to the light (which is what the fan/light LZW36 solves for):

Scenario B has a 14-3 Wire leading to the light (as shown in their diagram): 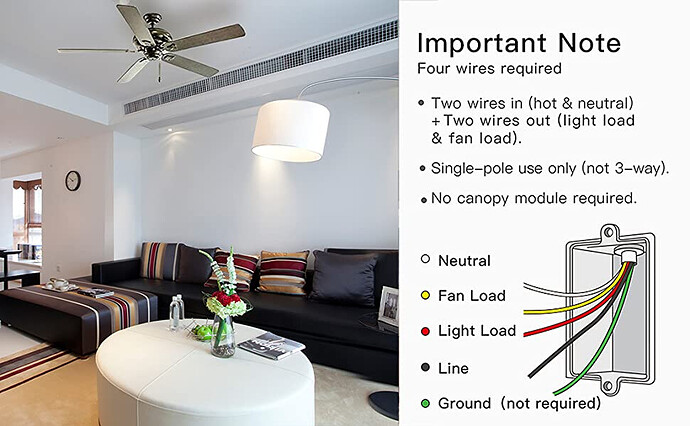 Their solution would put both the fan and light loads onto one switch along with the line.

Whereas with the solution in this thread puts the fan load on the fan switch, the light load on the light switch, and then split the line into both switches.

Definitely something we can explore in the future as the dual switch option has been brought up a lot!

yep. I have some fans that are wired to a 2 in 1 switch where the switch controls the light, and the slider turns the fan on and controls its speed. ideally i wouldn’t have to break out a ladder to make them smart fans =)

Seconding this request @Eric_Inovelli. I have one pesky ceiling fan upstairs that uses a unique 2 slider single-gang switch and there are no HA-compatible options on the market for this setup. I’ve scoured the internet for anything that would work, it’d be amazing if my already preferred brand came up with one.

i found the lutron switch that was being used at my old place, its the skylark. here is a link for info on it.
https://www.lutron.com/en-US/pages/SupportCenter/support.aspx?modelNumber=SFSQ-LF&Section=Documents

@tterrag do you have the Dual Slide-to-off Dimmer Skylark?

Not exactly, it’s one with more or less the same functionality that is made by the same brand as the fan itself: https://www.amazon.com/Hunter-27182-Fan-Light-Control/dp/B000BQUTX6

@akp55 @tterrag Just a thought for you guys… it’s not too difficult to change a box from a 1 gang to a 2 gang, 3 gang, etc… If the wiring is already there for separate fan and light controls, it’d be quick and easy to add another gang to your box and split it off into 2 switches instead of the 1.

May not be the most “ideal” solution, but neither is waiting until somebody manages to design and produce a switch for this specific and niche use-case.

Just make sure there isn’t a stud in the way.

Ask me how I know

it’s not too difficult to change a box from a 1 gang to a 2 gang, 3 gang, etc… If the wiring is already there for separate fan and light controls,

I prefer that solution.

you’re right, that is why i am going with a different vendor.

I get that you have that very specific use case, but most fan switches are not wired that way. They usually either have a normal single switch for power and the light/fan are controlled with pull chains/remotes or they have two separate switches. Smart switches are a niche product as-is and a niche within a niche is going to be very difficult to find… and if you do, it’s likely there are likely sacrifices to be made (in the example you gave no-name brand with questionable quality and unknown support.) Personally, I would look to other solutions to get me on better quality products (get up a ladder once… or switch to a 2-gang box)

really? in every place i have been, i’ve seen these pull chain style fans with the lutron skylark or similar style switch. the switches i am talking about retrofitting are in a 100% new build, and i have a skylark single gang here for all 3 fans as well. not to keen on modifying the walls in my new place for something that you think is a specific use case.

I literally have the opposite problem as you. All houses I’ve purchased (2 new construction, 2 already built) have had individual switches for each function on a fan. Each person has their own individual taste. 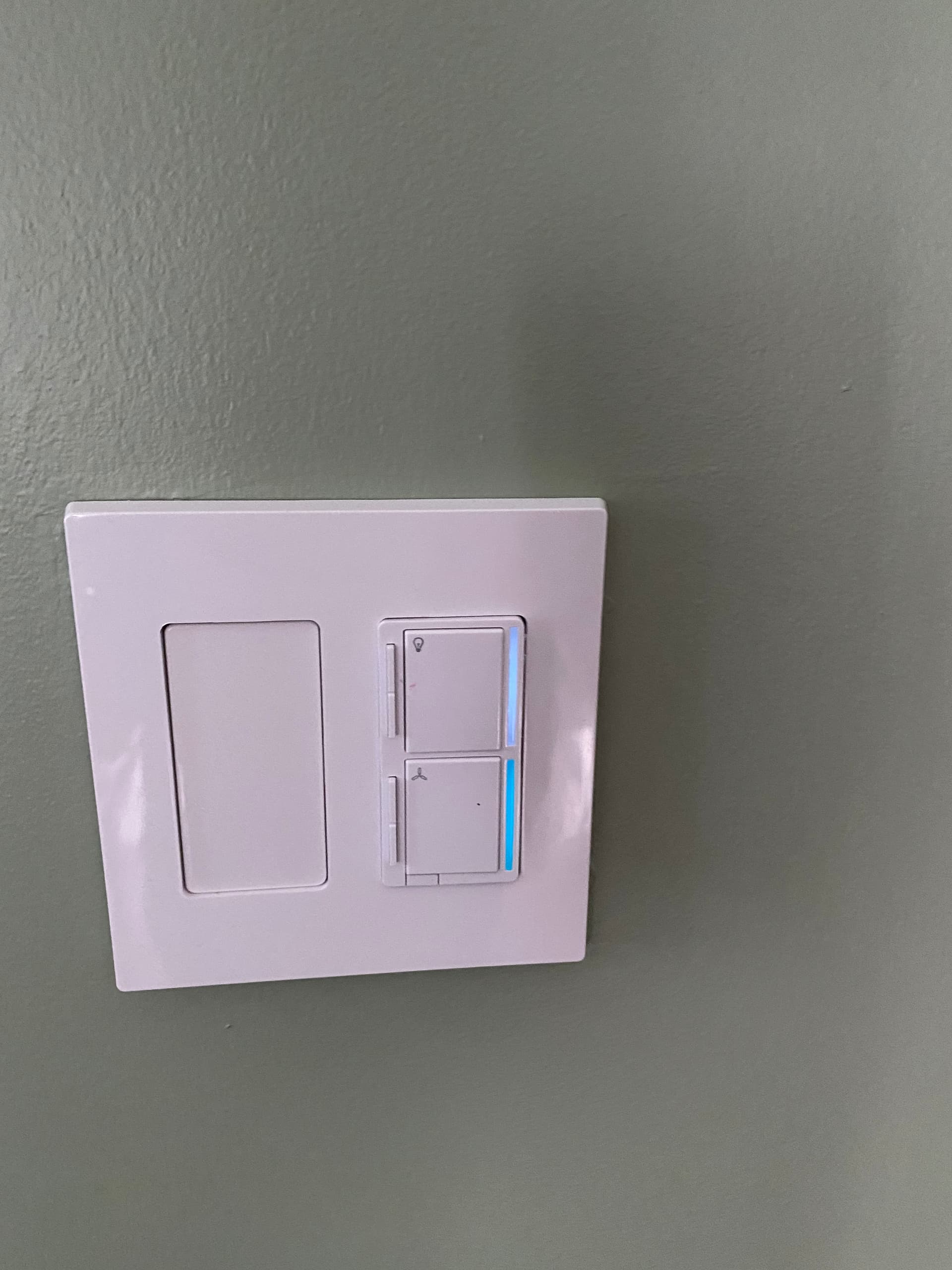 I’ll be removing this LZW36 in favor of two switches to fill in the gap.

Hopefully you’ll see a smart dual function switch in the near future.

I thought of that, but unfortunately the existing switch is on an awkwardly small segment of wall. 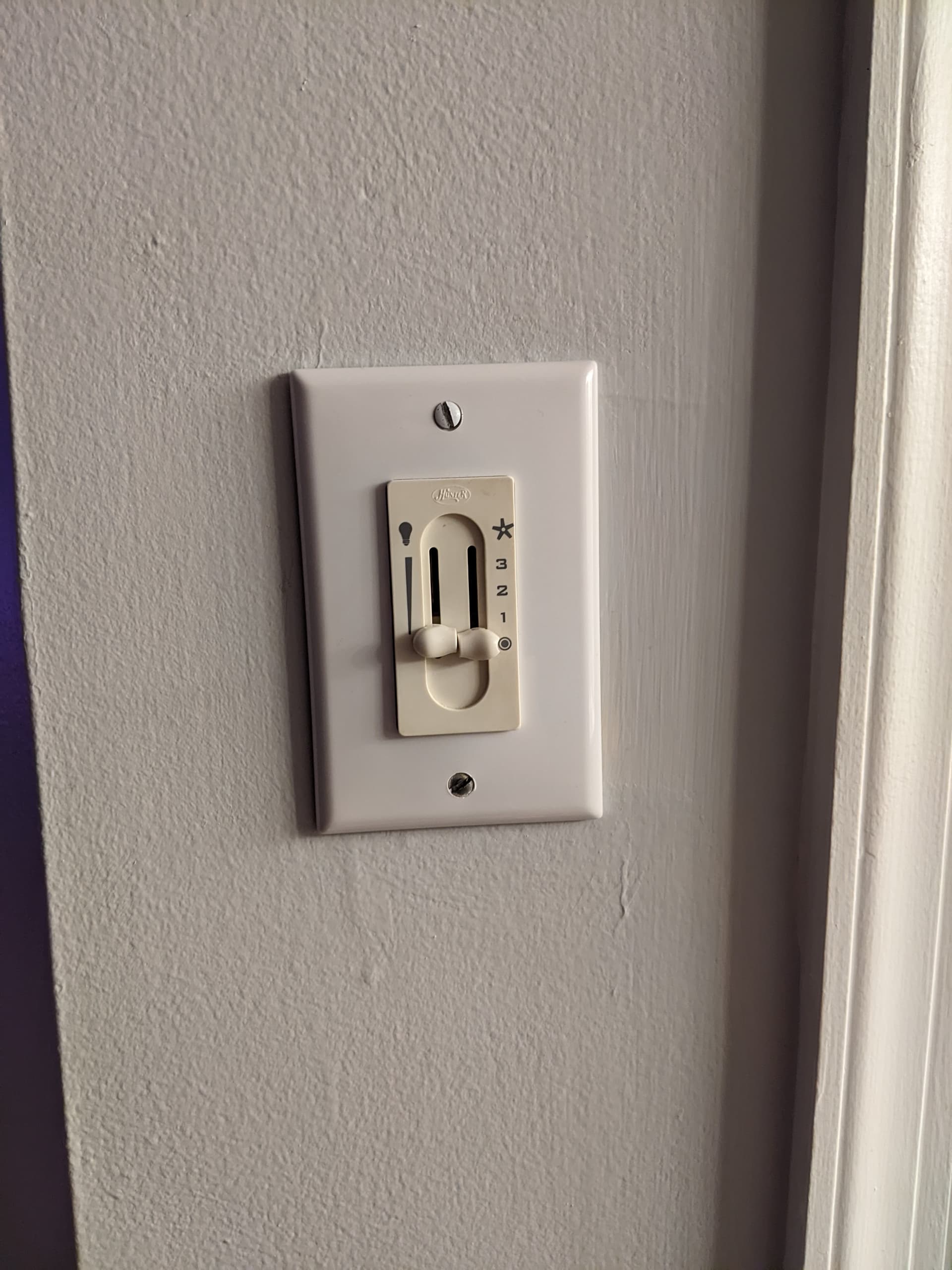 I don’t think there’s enough room here for a 2 gang.

No, I wouldn’t think so either from looking at it.

The only option I could think of for using 2 devices here would be to stack 1 above the other. I’ve got 1 spot in the house where they’re on top of each other like that. Admittedly it’s not my favorite, but doesn’t look terrible. 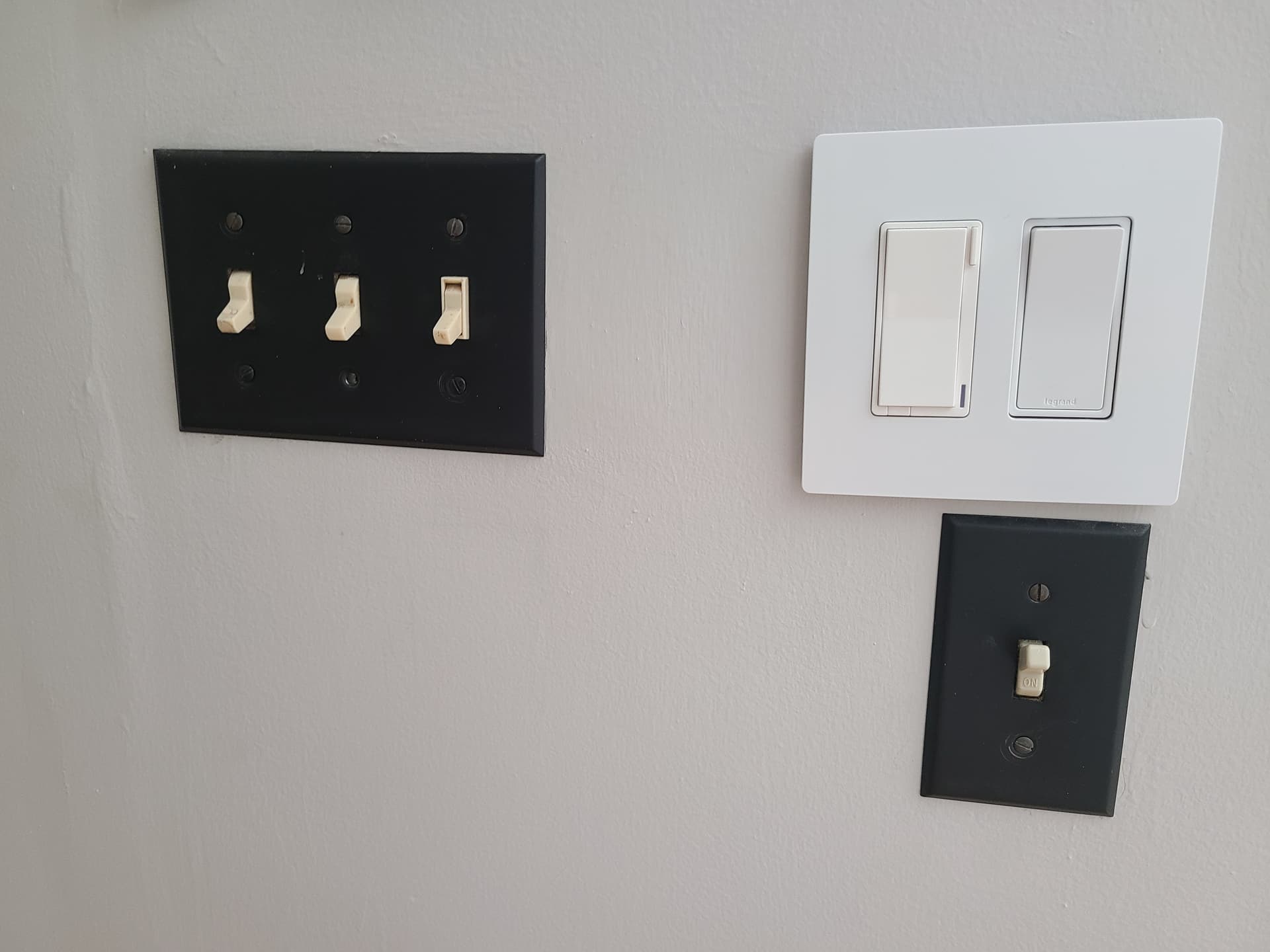