I am sure you guys can not fully confirm, but if you can has Linus or Jake reached out about this? Might send it in a merch message tonight on the WAN show if not.

Great question. We’ve been back and forth a bit (both with Jake and Linus) and ultimately where it left off was Jake saying he is going to let Linus respond.

Basically when the original drama with Jasco went down I reached out again (as we spoke maybe 8mo ago when he was first making a decision) and after a few back and forths with Jake, I got a message from Linus saying that while he’s not sure where things will go, he really liked what we were doing and said many of his subscribers recommended us. It was a nice email.

Then I pitched the idea of building a new switch (the one shown above) and Jake responded that he’d leave it up to Linus to decide. But that was a week or so ago.

I was going to wait until we got beta samples to reach out again if Linus hadn’t reached out by then, but any help we can get from you guys would be amazing.

What this project really comes down to is that if Linus helps us promote it, we can make this happen extremely fast, where if he doesn’t, it will take a while. Either way it’s happening bc we do have a large company interested in a WiFi version (that we can then convert into ZigBee/Z-Wave) but I’d love to fast track it.

Plus, this switch will be light years ahead of Jasco (a and any of the competition). I’m saying this out of confidence in our community and beta testers.

Net - man, I’d love for ppl to constantly keep this in the forefront of Linus’s mind!

Personally, for one built into a light switch, I would settle for simple “motion”/“no motion” and don’t need fancy occupancy counts.

IMO simple Motion/No Motion can (should?) be handled with PIR. However, as anyone who has used a PIR before that is not enough. I think what is exciting about mmWave is it’s higher sensitivity allows for it to act as a highly accurate OCCUPANCY sensor, even when the occupant is completely still.

However, that brings in additional complications. How do you rule out false positives? (mechanical motion in the room such as fans or curtains blowing the in the wind, keep pets from triggering automations, etc.) I’m thinking the only way around that might be the more advanced sensors that can track # of people in the room. If the cheap sensor is just motion/no motion, that might not be good enough to differentiate between 0 people and 1 person. I don’t care about being able to differentiate between 1 and 3 people… but I definitely don’t want automations being triggered in unoccupied rooms by non-human motion.

IMO simple Motion/No Motion can (should?) be handled with PIR. However, as anyone who has used a PIR before that is not enough. I think what is exciting about mmWave is it’s higher sensitivity allows for it to act as a highly accurate OCCUPANCY sensor, even when the occupant is completely still.

Yeah, occupancy is essentially what I was getting at. That is effectively the same as motion/no-motion, but with the higher sensitivity of mmWave “detecting motion” when someone is breathing in the room. The occupancy was the part I actually want it for though. Good clarification

Well i did manage to get linus to discuss it on wan show but he didnt have too much of an opinion and really seemed unaware of any details of the project. Intel Messed Up - WAN Show June 24, 2022 - YouTube

seemed unaware of any details of the project.

Yea the way he was answering it seemed like he was put off a bit. He didn’t know the kickoff project was named. I believe the name was used in best intentions, but he seemed a little upset. He also seemed more upset when he found the LTT logo in the PRD.

My take on it was he really didn’t open/comprehend the emails sent to him from Inovelli. They were probably stashed somewhere in his inbox with the other email when Eric offered his entire switch lineup and he blew it off.

Yikes, yeah idk where all the confusion came from. I sent an email explaining we’d make a switch for him, he even said we offered in a prior podcast. I even said in the email we’d name it after him, but that if he didn’t want that, id change ut. But after that I haven’t heard from him.

It was all done in the best intentions and as noted above, I’ve made it clear we don’t have his endorsement yet.

I guess I need to send another email…

Appreciate you bringing it up! I guess at the very least it got him looking at the project!

@Eric_Inovelli either way back by Linus or not it has the potential to be an outstanding switch. For me and my use case there is the ability for fall detection which I need as my mother is older and has passed out multiple times. I was looking at setting up mmwave fall detection using esp32 and mmwave chips but not being a programmer I am not sure I have the ability to do this one on my own. This could be/will be an awesome tool in the z-wave arsenal!

Oh wow, I hadnt even thought about that use-case. There’s a huge need with the, “aging in place” demographic.

Thanks for bringing this up!

If Linus doesn’t want his name on it, I call dibs! Name it a Project Ken!

I’ve been so excited about a motion switch since the product roadmap that I basically see this as my switch anyway. Anyone here would be honored. Whatever it takes to get this thing moving forward. Without Linus’ involvement will be better anyway since he’s still a home automation newbie and doesn’t really know what he wants yet.

Lol maybe I will rename it haha!

I agree, while this started out as more of a rally around proving what home automation can do and that there are good companies out there that advocate for their customers rather than pretend they don’t know their own policies and only change them when damage control is necessary… This has since morphed into a, “holy crap, this could legit be a game-changer for all industries” and it would be amazing to be the first to market with it!

However, I think what also attracted me to this project in relation to Linus was that it would be an opportunity to reach a new set of people. Ones that may not have heard of us and together with the existing community, we’d have enough momentum to push forward a crowd funded product.

I’m not sure we have the momentum without Linus yet, so I was hoping to get him on board.

But… I think the best approach is to keep this project going and develop some awesome beta units and once everything is flushed out, we can go back and revisit this relationship. From there, open up crowdfunding and hopefully have his buy-in, generating the momentum we need to bring this to production.

The good news is tooling isn’t as bad as I thought it would be and so the up-front costs aren’t terrible. Still more than we have to spare right now, but it’s doable.

The more this project is discussed, the more excited I get though of the possibilities!

@Eric_Inovelli here is a link to TI for fall detection https://training.ti.com/intelligent-fall-detection-using-ti-mmwave-radar-sensors

Xiaomi/Aqara have a (few?) mmWave ceiling sensors with fall detection. Haven’t checked if z2m supports it.

I’d rule out false positives from pets using a secondary motion sensor that provides “pet immunity” like the Visonic MP-840 or something similar. Mechanical, you would expect a pattern, so depending on how the reporting is done, a filter of sorts could be done. I haven’t worked with mmWave so I don’t know if the filter would be at the firmware level or the controller.

Any possibility to get a European standard version of these switches? (our switches are more of a square shape standard) The state of things is even worse than the US, but the market size and certification costs are similar to the US.

I love the crowdfunding idea. Not sure how much you need for tooling, but I bet with the group here we could get a hefty portion of that funded with a Kickstarter? I do love the idea of Linus and his 14.5M subscriber base, that surely will bring in a LOT of new users to Inovelli… I can see what that would be a huge win! Regardless…sign me up for a kickstarter on this one!

Wanted to give a quick update – we received confirmation that the lux sensor could go at the bottom if we wanted it to.

So, I think the design will ultimately end up like this: 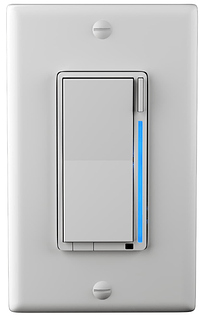 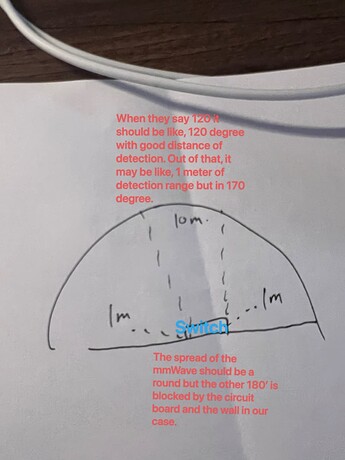 In other words, the mmWave FOV is normally 360, but it’s cut in half to 180 due to the circuit-board and wall blocking it from going backwards. So, out of the 180, 120 FOV can reach 10m, whereas the remaining 30 degrees on each side likely has a 1m detection view.

I think there is still a lot of work to do and a lot of questions that need to be answered and hopefully we can continue to work together in the community along with the manufacturer on this one as I think we’ll have to figure out a way to maintain a reasonable cost, but also provide the features the majority of customers want/use.

Still waiting to hear back on some of these questions and I’ll report back once we get more info. Curious what everyone thinks!

Sign me up for this kickstarter too. I just start looking into mmWave and this project will be a game changer with the Inovelli quality stamp!

Would 5.8Ghz sensors cause any interface with 5Ghz wifi?

Thanks for the info. Hopefully we can get the advanced mmWave without the costs being too prohibitive