his WiFi that Zigbee introduces.

I understand that you think it’s a non-issue, but if you’ve watched any of his videos, you’d know he doesn’t want to take a chance.

You can find it in this part of his video that he clearly states that he’s going z-wave to avoid the WiFi interference. 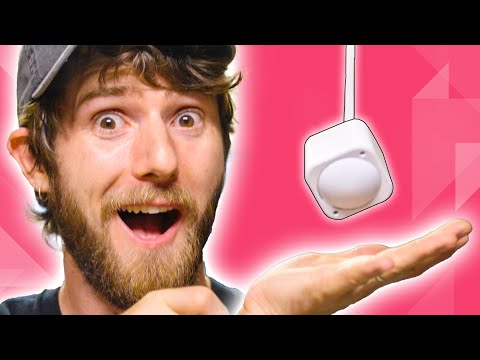 Oh I get it. I was just implying that zigbee only interferes with 2.4 ghz channel. To simply just say “WiFi interference “ would be incorrect because it doesn’t interfere with 5ghz band (even harmonics). If someone wasn’t as wifi smart they would probably think zigbee is going to break their whole house wifi which isn’t really the case. Yes, it could interact with the 2.4 channels…but it’s not going to break it.

I wonder how many devices he has on 2.4 ghz?

Unless he’s got APs in every room, most of his devices will probably fall back to 2.4Ghz. I run 2 APs in my setup and most of my devices are still operating on 2.4Ghz.

Well if he’s foolish not to install APs in multiple locations (and properly configured) then I can only say he failed himself. He spent $10k on switches. A couple thousand in WiFi gear isn’t going to break him.

I don’t have any devices that fall back onto 2.4. I don’t use band steering either as tats a band aide and you’re relying on UI to perform this function adequately. Not all their products are designed flawlessly. I run separate rf channels/SSIDs and each device is connected to the appropriate SSID to match. There’s no way it can fall back to 2.4.

In my last house (2200sqft) I had 6 APs covering main level, basement and outdoors. All power outputs were manually adjusted and appropriate channels configured (1,6, 11 @ 20 mhz bw for 2.4; 5 ghz had 40mhz bw on non-DFS channels.)

Current house I’m using the UDR until I can get cable pulled to rooms to add the appropriate amount of APs. I generally have 50-60 clients with no issues.

You guys haven’t been following along. Dude is going to kill his neighborhood with wifi strenth. He’s got over $20k in AP’s alone I believe.

Sorry ahead of time for the lengthy feedback.

I am building a new house in Florida and been looking for a switch like this. Wouldn’t have to deal with motion sensor batteries if there was motion detection in the switch. Issue is if you pack TOO much in, then it’s an expert of some vs doing everything well… what gets sacrificed because of either space or cost?

What I would hate is to outfit the house and find there is a fatal flaw, or if I paid an extra $30 it would be made of quality parts vs cheap parts. My opinion but there are too many things with cheap parts and I have to replace all the time … even something like a coffee maker… you can get one that is $200 with all kinds of fanciness, but it was made cheaply and when breaks it can’t do the one thing I want it to do; Brew coffee

so I got a $23 one and it’s lasted for years; placed a smart plug on it and done.

The thing for me is reliability, and keeping it simple. Let the hubs do much of the heavy lifting, but expose and send the data needed to the hub for that processing and decision. Stick to the foundation

but have fall back in place for if a “fancy” component fails. Use quality parts so that it’s reliable and lasts, and just be transparent and then people can appreciate why the cost is high. If I knew I was getting quality product that I didn’t have to replace for 10-20years or more like these dumb toggle switches, I’d make the investment. I don’t want to feel like my investment is going to go bust in 4-5yrs or even less with things that burn out easily… I already have cars that do that

My house will have bedrooms but really one open space great room and outdoor lighting (everything a typical house has). Thing is people might be in the center of the room, and so is there going to be a motion sensor near to where people are congregated or how far can the sensors sense? I guess that is the difference of the 5.8Ghz component.

If you build it with quality components, and have a warranty that backs that up, then I’d be in for the cost to have those core motion sensing and light/fan switch magic features.

Overall, I love the feature set. One thing I would add is the ability to set the LED color and intensity based on commands from the hub. I’ve never used one but the HomeSeer HS-WX300 has this feature and I would love to see it in this product too.

If the alarm is armed, I’d like the light switch in my garage to be bright red so it reminds me to disarm the alarm when I walk in.

If it’s between 8pm and 11pm on Trash Day, I’d like all my switch LEDs in common areas to be Blue. On recycling day, Green.

One thing I would add is the ability to set the LED color and intensity based on commands from the hub.

This is an existing feature in currently available Red and Blue series switches/dimmers - color, brightness, flashing, etc. From the product description:

I don’t see it spelled out specifically in the technical description at the start, but the same capability will certainly be included in this switch design. There’s mention further down the thread of making the individual LEDs in the strip addressable, so you’d have even more granular control.

That’s great to hear. I didn’t see it in the design doc so I figured it wasn’t included. I should have read more thoroughly.