I’ve got a LZW31 SN installed in a 2-way non-neutral config controlling an LED motion sensing security light outside. I’ve installed a bypass at the light end of things. Unfortunately it’s really not working at all.

When I turn the switch on the security light flickers like crazy for a while and then the switch appears to reboot itself (the LED bar flashes through a series of colours and the light turns off). When the light is on the LED bar flickers blue. Turning the light off is hit or miss.

I’ve made sure to configure the switch to non-neutral mode, and I’ve disabled all the ramp and dimming steps so it should just jump straight to on/off. I’ve upgraded the switch to the beta 1.44 firmware.

Black is line, white is load, confirmed with a meter.

Double-check line and load at the box measured against ground. Most electricians would bring the hot in on the white conductor, but it’s not incorrect to do it the other way around. Just something to check.

The bypass is connected to black and white.

Which white? You want it across the two conductors to the bulb.

Just a WAG, but even though you’ve configured the dimmer as a sort-of switch, I wonder if it still is sort of a dimmer and things aren’t working correctly because you really need a switch. The motion detector is an added dimension here. Do you have a Red switch to try? That one has a relay.

Thanks for the quick reply and suggestions. The switch installed now is a Red Dimmer. I don’t have a Red on/off around, but I do have a Black on/off I guess I could put in and try instead (although it says it needs a neutral for install, which I don’t have).

I’ll triple check the line/load. I confirmed it using an electrical tester with all wires in the box disconnected from a switch and the breaker on. The only wire that showed life was the black one. This is what I have available in the switch box: 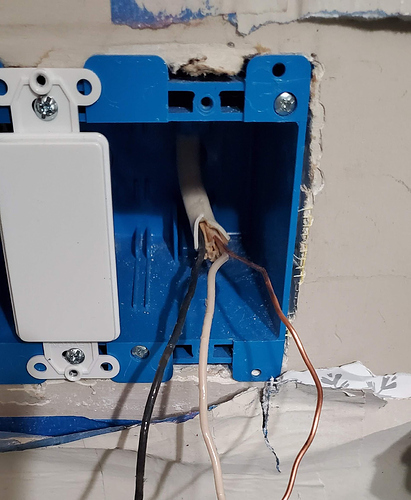 There’s only one white at the light. Here’s a photo of how I have it wired up: 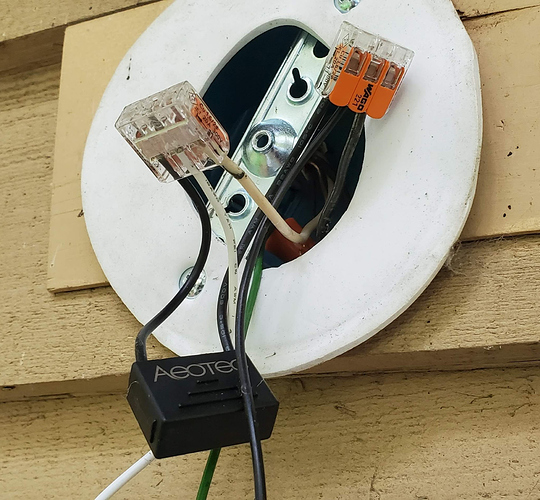 When I turn the switch on the security light flickers like crazy for a while and then the switch appears to reboot itself (the LED bar flashes through a series of colours and the light turns off). When the light is on the LED bar flickers blue. Turning the light off is hit or miss.

Just curious – are you using a dimmable bulb? I know you have the switch set to a ramp rate of zero, but I’ve definitely seen this with non-dimmable bulbs even with the ramp rate set to the way you have it.

Right. Disregard my question about the which white. If the hot was sent to the box over the white that would make sense, but not as yours is wired. That looks OK bypass-wise.

Also disregard my swap out for a switch suggestion. Duh . . you are correct that you can’t use a switch with no neutral.

I don’t know. The whole unit is one sealed thing, I can’t replace the bulbs in it and it’s been on the side of the house for something like 5 years

Do you have a switch on the light where you can bypass the motion detector and just use it as a light? If you do, put it in that mode and see what happens.

I looked and it has sensitivity, timer, and dusk/dawn adjustments but no motion sensing on/off.

I have to go to Lowe’s later today anyway to return some stuff. I’ll buy a cheap bulb socket I can temp wire in with an incandescent bulb to see what happens.

Update! I got a plain bulb socket from Lowe’s and installed it.

So obviously it has to do with the light. I’m happy to replace the light with something else if I know it’ll work with the switch. I just need bright LED lights for security purposes. Is there one that’s known to work in this setup?

Is that with the 100w in parallel?

Anyway, I went to Home Depot and bought a new, non-motion-sensing, LED floodlight. Worked like a charm! Woooooo!

That’s awesome man, so glad to hear! I’ll add this to our compatible bulbs list! You don’t happen to know the old make/model, do you?