I am attempting to wire my smart switch in a two way configuration. My home has neutral wiring, however, the electricians did not make the neutral wiring available in one of my switch boxes. The wiring configuration I have can be seen in the attached image. 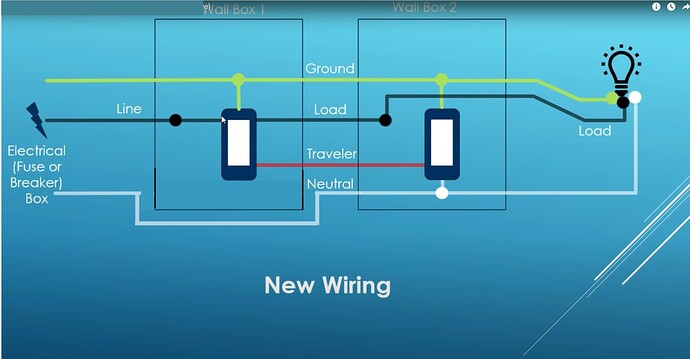 image1920×999 71.6 KB
Currently I am able to get full ful functionality from my smart switch, however, the aux switch does not work. I have followed the reprogramming instructions and have tried it both for neutral and no neutral configurations. Neither option has allowed the aux switch to function. Is there a way to allow this configuration to work? Is it okay if only the AUX switch is supplied with power from the neutral wire? If this is not possible, can I reprogram a Inovelli smart switch to operate as my AUX switch? 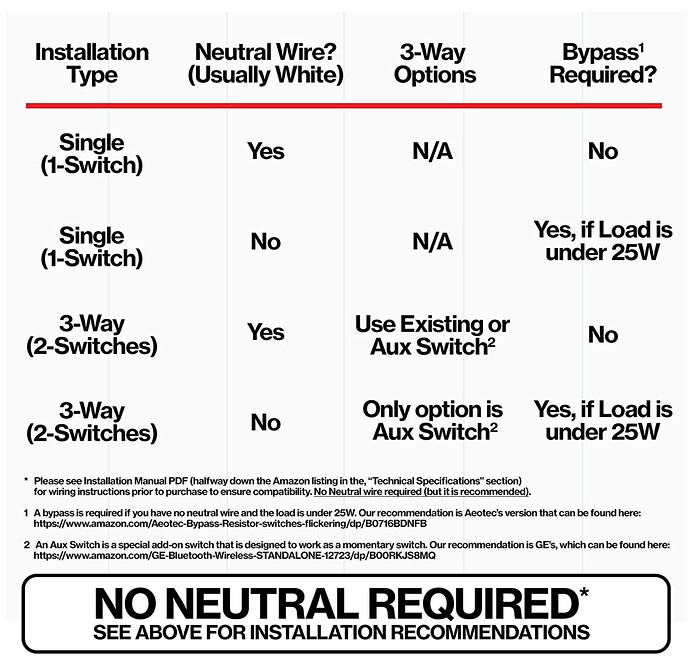 Just so you are aware, when there are two switches in a switch leg, that is a 3-way, not a 2-way, configuration.

What type of wiring do you have, if you know? Is it Romex or older cables where the conductors or bundled in a sheath? The fact that you have a ground conductor suggests that, so it seems strange that a single neutral conductor doesn’t get routed through the box on the left. On the other hand, you may have separate conduited conductors like THHN.

With no neutral, an aux switch needs the line connected to the neutral terminal.

The diagram does seem odd. Do the colors you drew match the wire colors? A box with 2 black and a red wire but no white wire is odd. I would have expected 2 white wires in that box.

@ianmackayfisher Unless there’s something else that you’re omitting, that wiring configuration would never have been up to code (even old codes). That doesn’t mean it didn’t happen in your house, but I’m wondering if perhaps there’s more to the picture.

One of the requirements of the NEC, from article 300.3(B), says that all conductors of the same circuit must run together within the same cable, conduit, etc.

The reason for this is to prevent magnetic fields from developing around the current-carrying wires. This would happen if, as in your case, the hot wire is separated from the neutral. The hot wire and neutral wire carry opposite currents, and if they were next to each other (as required by the code) the magnetic fields created by these currents would cancel each other out.

Stray electromagnetic fields can cause various problems, including overheating, especially of steel conduits, which can lead to a fire, which is why they’re prohibited.

I think there are probably ways to make this work safely, but we’re going to need some more details in order to help you.

This is probably solved, but the drawings didn’t make any sense. You can’t get 2 black and 1 red wire in a switch box without 2 white conductors.