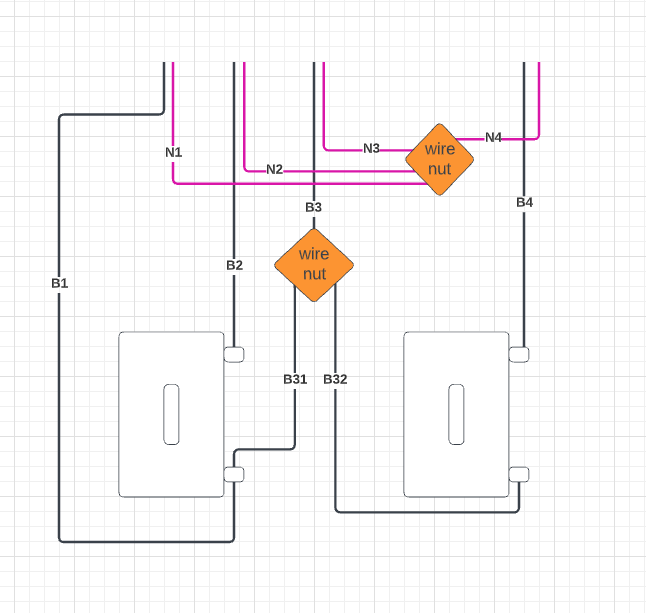 I have attached an image of what the wires look like in the box. I used pink for the neutral wires, they are obviously white in reality.
My main confusion comes in the fact that there are 4 different sets of wires coming into the box. but only two switches.
Both of these are single pole switches. Why do the left and right switch both connect to B3?

Anyways, is it this simple, or is there more to it? 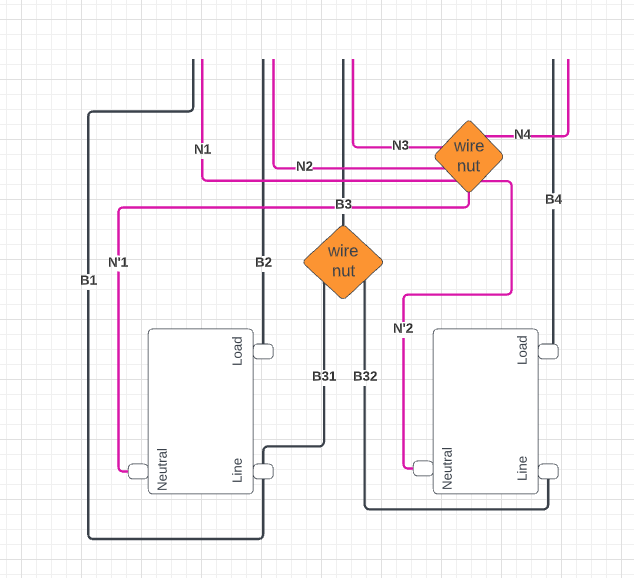 Looks like you have it figured out to me but you should put a multimeter on it to be 100% positive.

B3 is likely where power is brought into the box.
B1 likely goes off to another box for something like a plug or another switch.
B2/B4 look to be loads

Personally I would move B1 into the B3 wire nut instead of connecting it through the terminal of the switch.

The reason there are “extra” wires that are confusing you is because this box is in the middle of the circuit. The hot/neutral are coming from upstream, used in your box, and then sent to another box downstream. It’s being fed by either B1 or B3, then sent downstream via whichever pair isn’t the upstream. What @MRobi said, but use a meter to test those two pairs so you are absolutely sure which is which.

You can eliminate one conductor and one wire nut in the box by connecting the hot black to one Inovelli and using a black jumper in the other back-wire hole to the other Inovelli. Then connect the downstream black to the 2nd hole on the 2nd Inovelli. The less conductors and wire nuts in a box, the better.

Diagram looks right. Doesn’t really matter if 1 or 3 is the hot because they are connected together.