3 way dimmer/aux wiring help (no neutral/return in box with line?)

I’m hoping to wire a dimmer + an aux switch for this 3 way setup.

I have changed quite a number of 3-ways and 4-ways at my place, but have to admit this had me scratching my head for a bit.

I am inclined to think that this is a neutral setup? but am confused by the sole hot wire in box 1 without a corresponding neutral/return. 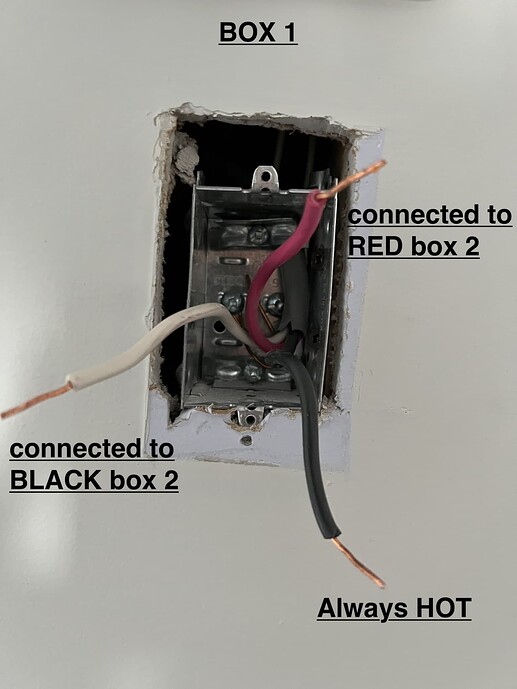 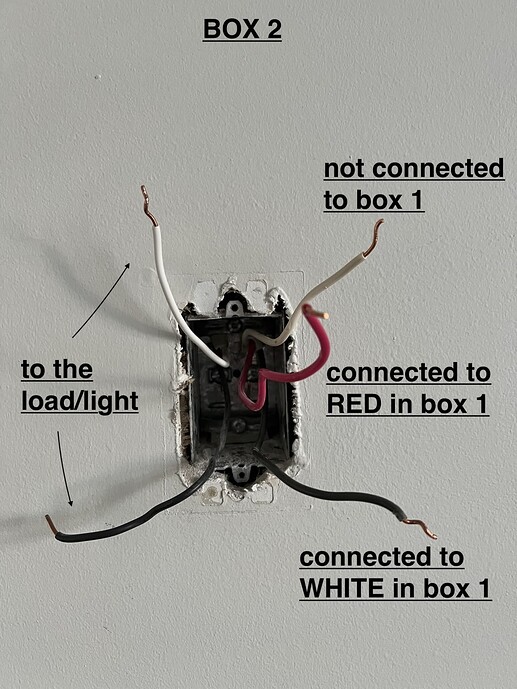 Do you have pics of the wiring with the switches provisioned?

And when you say the black on the 3-wire in Box 1 is always hot, was that test done with the switches removed?

The conductor schema suggests power to Box 2 with the light in the middle, but the constant hot in Box 1 suggests otherwise.

Do you have pics of the wiring with the switches provisioned?

And when you say the black on the 3-wire in Box 1 is always hot, was that test done with the switches removed?

This is correct. After taking off the switch, I flipped the breaker back on and found that is always hot.

No, I inferred that it goes to the light because the lights would turn on if I feed power to it (by connecting [box 2 white wires] together, [box 2 black wires] together, then [black + white in box 1] – essentially made it a single pole IIUC)

The conductor schema suggests power to Box 2 with the light in the middle, but the constant hot in Box 1 suggests otherwise.

I reached the same conclusion confusion after comparing against many wiring diagrams.

So if you didn’t have the 2-wire in Box 2 I would think power to the light with the two 3-wires going to each box. But that’s not it either because you’ve confirmed the 2-wire goes to the light by powering it.

The fact there are mismatches between the connections/colors of the 3-wires in the two boxes suggests that there is a J-Box somewhere that is interconnecting the two 3-wires.

So maybe it’s this. Here is how you do power to the light, non-neutral, with 3-wires going to each box, which is a standard (dated) variant of wiring a 3-way. 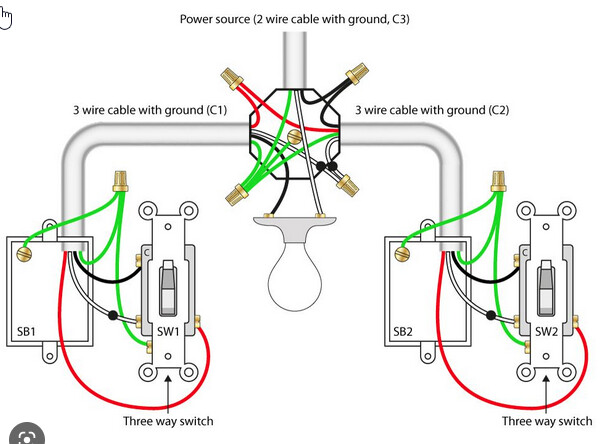 But instead of the junction of the two 3-wires at the light box, what if the hot is being fed from a SEPARATE j-box instead of the light. You would still have the same wiring methodology, but it would be a bit different because you have to send the power to the light separately? The fact that you have a single hot (with no neutral) in Box 1 would be consistent with this.

You seem to have a decent understanding of wiring topologies, so hopefully this makes sense. I have no idea if this is exactly what you have, but it sounds good (at least in my mind, lol).

If it will help I can draw my thoughts out later.

I apologize for the slow response - went on a last minute work trip.

You seem to have a decent understanding of wiring topologies, so hopefully this makes sense.

Thanks for the kind words - I’m learning as I go (or as I make mistakes…).

Does the following sound right to you?

I’ll be back by Wednesday and will be to confirm/try then. Thank you!

Does the following sound right to you?

I’ll draw out what I described above as a possible current configuration. You can then test and see if that configuration seems accurate. If it is, I’ll draw a solution from the existing.

My previous guess is probably incorrect…

After wiring it as such, both aux and the dimmer works as expected, but my lights kept flickering & the dimmer kept buzzing despite in “no neutral” + “3 way aux” + “smart bulb mode” (the load is 9 smart canless light).

I’ve verified the dimmer works with the same canless light in a different location.

Famous last words for sure.

In another wild attempt, I connected the white wires in box 2 to the neutral terminal on the dimmer.

And somehow it worked – no buzzing and no flickering at the moment.

The aux switch worked momentarily (was able to turn on/off with it), but stopped working shortly after and I have no idea why…

Take a look at this drawing. It seems to match what you’ve described:

Not sure if you can get at the cans and figure out which is the first one to look at the connections there.

At this point we’re just trying to figure out what you have. If the drawing is correct, the next step will be to modify it for the Inovelli’s.

No guarantees this is it, but it’s the only thing that makes sense to me. 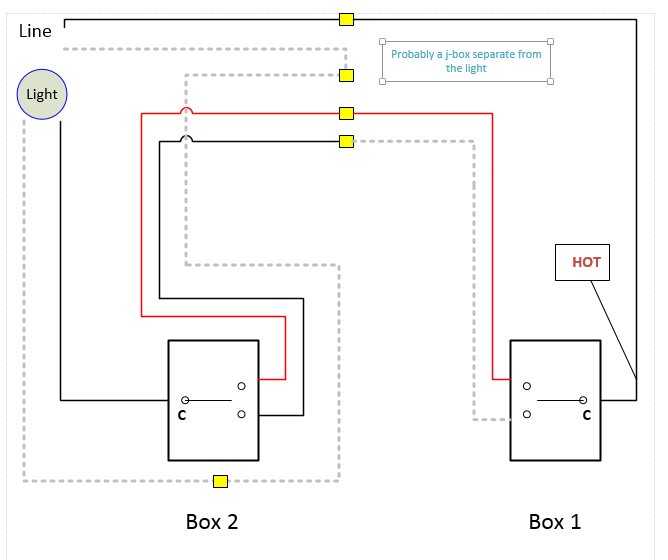 This indeed matches what I saw & tested in the boxes.

Do we need to account for the 2 white wires in Box 2? I assume we can only know for sure if we look at all the connections at the cans?

Not sure if you can get at the cans and figure out which is the first one to look at the connections there.

Not impossible but it’s a bit hard to get to – is it acceptable to directly proceed to the next step?

Which box do you prefer the Inovelli to be in? Now that you believe my drawing matches what you have, I will take a look at it to see what is possible.

Preferably box 2, but I’m fine with the other as well if it’s simpler.

Can’t thank you enough for your time & effort

You have a couple options, I think, presuming that the diagram I drew is accurate. Only you can verify that. But if it is, here is what I came up with. These scenarios presume that there will be no re-wiring at the junction box (probably a good presumption at this point),

This WILL NOT work, as you only have 2 conductors to work with between the two switch boxes. One of those conductors would be used to send the hot from 1 to 2 and the other for the traveler. So you’re short one conductor needed to send the Neutral back to the Aux. (This is presuming that the Inovelli in 2 would be a neutral installation. While there might be an alternative to this if you wired it as a non-neutral, even with a neutral in the box, I shy away from non-neutrals whereever possible.)

Inovelli’s in Both Boxes i.e. No Aux

This WILL work. The downside is more cost for the 2nd switch. You would also have to use associations for the Red series and binding for the Blue series to get the switches to talk to one another. I’m not the guy you want helping if you need guidance with that part. But the wiring portion is straightforward. The two exising conductors between the two switch boxes would be used to ensure a hot and neutral at each box. 2 would be the load box.

If you don’t need the 3-way, a 2-way with one Inovelli will work in either box.

Thank you (again) for your detailed analysis!

After discussing with my family, we felt strongly about having scene control at box 2. So I ended up keeping the 3 way and went for the 2 Inovelli’s approach.

I really appreciate you sharing your thought process, this actually helped me ton with understanding the topology & Inovelli’s wiring needs.

I’m glad to help! That certainly was an interesting topology. There are no limits to electrician creativity!