Hi,
This is my first purchase of an inovelli switch. The primary purpose was for a no neutral 3 way configuration. I bought the second gen black dimmer. At first I was a little confused about the really old wiring layout. I got the switch started, paired with SmartThings and the settings all done via the hub. Unfortunately, the switch was unresponsive physically and on the app and the lights were flickering. I then studied the wiring diagram and tested the wires some more and redid the wiring to the switch. I’m more confident now, but could be worse than before. The switch did power up, but the light strip turns yellow and the lights remain flickering. The switch continues to be unresponsive. What does yellow mean for the light strip? Attached is a picture of the lights and the wiring I’m working with. There are three of these bulbs for the 3 way switch. If these bulbs are not good, what else can we buy? Please help. There are so many unknowns for me! Is this just a wiring issue? Is it just a bulb issue? Did the inovelli break? The aux switch break? We appreciate the help!
20200831_010519|243x500

So let’s start with some basics. Why did you decide that your installation is a non-neutral?

I’m guessing from your pictures that you are trying to put the Inovelli with some of the conductors wired together with electrical tape. Is that an Aux switch in the other box? (The white switch.)

The reason that I’m asking is that I see what is likely a neutral bundle in the box with the white switch. That may very well be the “primary” box where the Innovelli would go. Just so you understand, if your 3-way is wired as a neutral installation using dumb switches, it needs to remain a neutral installation and wired with the Inovelli at the neutral location. You can’t just put the Inovelli in the other location and call it a non-neutral.

Do you have pictures of the dumb switches before you started changing things?

Bry,
Thanks for responding. It appears each box has a primary switch for one of the two 3 way dimming setups. The picture attached is the old wiring setup for the one that looks like it has newer wiring. This has a basic on off functionality. The old box had the one with the actual dimming switch. The new box had all three wires go to one bundle. In the old box, the wires were from multiple bundles. The line was from one, the travelers another and what seems to be the load a third. One wire from the ‘load’ (bottom right in the old box) and one from the ‘line’ (bottom left of load box) did have another wire from each tied together, with all other bundles coming in. I’m not sure what that was. However, the wiring and the bundles are so old, it had to predate neutral. Am I wrong? Was neutral always part of a 3 way setup and only recently became part of the standard for everything else? I did not take off the old tape and test for power in that bundle.

Regardless, do you know what then solid yellow light strip means? I appreciate your help!

The new box had all three wires go to one bundle.

What is that white switch?

Regardless, do you know what then solid yellow light strip means?

Sorry, no. Maybe someone else has seen that.

The line was from one, the travelers another and what seems to be the load a third.

You are going to have to get a better handle on the old box. From what you describe in the new box, I think (pending your confirmation) that you are right about the Inovelli going in the old box.

The problem is, at least as you describe it so far, if you have a line, travelers and load in the old box, then that is a neutral installation, because you said they came from three different sources.

So take a look at the old box and figure out what you have. The term bundle, btw, means wires tied together, so lets speak in terms of 2-wire or 3-wire. For example, you said that you found the line. That’s probably a black conductor, right? Is that in a 2-wire Romex? (I can’t really see into your box well enough to diagnose.)

How did you determine what the line load and travelers are?

Bry,
Thanks again for being patient with this ‘newb’.

I attached some pics below that will hopefully help you to help me.

Yes, in the ‘new’ box, all three wires are coming from the same Romex.

Hopefully someone can help with the ‘yellow’ light. 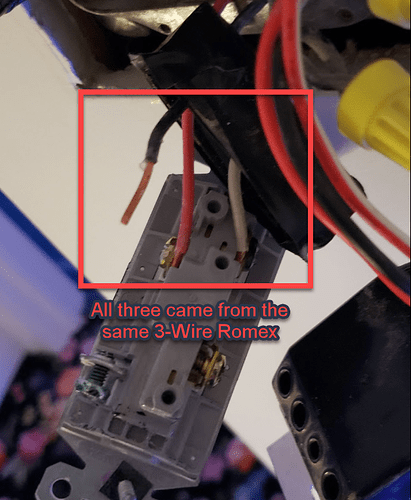 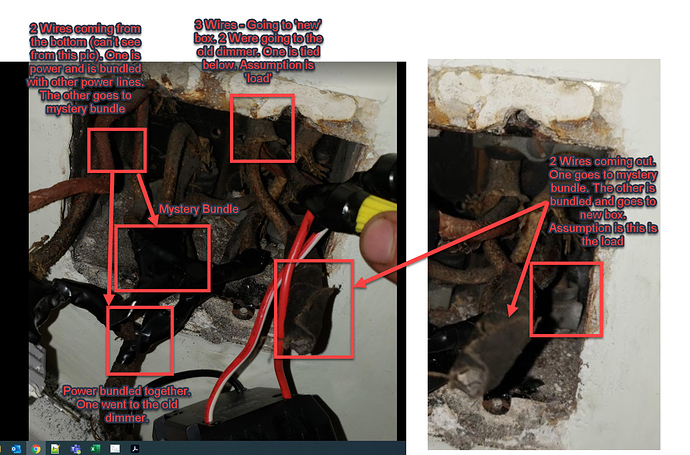 Thanks. Pics sort of help but it’s still tough to see.

So lets focus on the old box.

My understanding is that there were three sets of Romex connected at least in part connected to the old switch. Was it two separate 2-wires and a 3-wire (disregard the bare copper in the count if any of yours have a ground). I know you said that you said you let “all six” float, but I’m thinking it should be seven. Is this correct?

Do you have a meter?

Bry,
Thanks again for your fast response. Yes. Two 2-wires and a 3-wire. Why should it be seven? I had 3 wires to each switches. No ground or neutral for either.
I personally don’t own one, but I may be able to get one.

Bry,
So you do think our old mystery bundle is really neutral? I thought having neutral in a box is a relatively new thing, but maybe only for 2-way. Maybe they did include neutral in old wiring for 3-ways. Do you have any knowledge of the history of neutral being included in boxes?
If that is neutral, would this be the best diagram?
https://desk.zoho.com/DocsDisplay?zgId=691830694&mode=inline&blockId=k5bzm02e3ff95547644479b2952f447a07224

Also, do you think I broke either the switch or the aux? What would be the signs of a broken inovelli switch?

Thanks!
I appreciate your patience.

If you do in fact have two 2-wires and a 3-wire that at least one conductor of each was attached to the previous switch, then you likely have a neutral installation. I can’t see in your box well enough to see what you have, and you don’t have a meter to test. I would strongly encourage you to consult with a licensed electrician. To be honest, wiring these takes a bit of electrical knowledge and some testing. In the interest of your safety, I would suggest that you get qualified help.

Reference material: In a three way switch leg, if you have two 2-wires and a 3-wire in one box, it’s very likely that the Line (a hot and a neutral) is one of the 2-wires and the Load (2 conductors to the light) is the other of the 2-wires. The 3-wire goes to the other switch. The fact that all three conductors being attached to the far switch supports this configuration.

Explain to your electrician that he needs to identify the 2-wire Line and then use the diagram you referenced above to wire accordingly. If your configuration is identical to the theoretical one I posted, then that is the correct drawing.

Bry,
Thank you again. If I get access to a meter, what should I check? I feel like I am so close after everything I learned.

Bry,
You were right! The really old wiring was neutral! I learned a lot and you were super helpful. It’s working great right now.
Do you know if we can control the led color via smartthings automations or webcore with the black series dimmer? I would assume you can because there is a parameter for color. However I don’t see that available to control in smartthings.

Do you know if we can control the led color via smartthings automations or webcore with the black series dimmer?

Glad you got it going!

Not sure about the LED on a Black series.

It’s possible to control the LED color (child device) on Hubitat for the black series switches/dimmers. I suspect this should be possible in ST as well.

Thats what I thought as well. I believe I can through webcore, but I would prefer some basic control for my mother in law, who is not using webcore.