Hi Community
I have a long hallway that has several lights in it. a switch on each side. I want to install smart switches but realized I cant use the current GE smart switch with dummy add on because one side does not have neutral. Here is the following :
Switch box A : Does have a neutral wire coming out. Both those switches on left and right of the 3 way dumb switch are smart GE switches and are using a neutral wire and working.
Switch box B : Does NOT appear to have a neutral wire coming out. The wires you see attached to switch are all the wires coming out of the box.
Question 1: can I install my Inovelli switch in Switch box A and leave my dumb switch AS IS on switch box B ?
Question 2:If not what kind of switch can I add on switch box B side since it has no Neutral? I do Have a Jasco Add on switch which I was using for a three way switch with another smart switch. Its part model zw2004. Can I use that for aux?
Q.Electrician said he could run a neutral wire for me for about $150. Should I just do that to be safe?

I have attached wiring diagram with pictures of the boxes along with the jasco add on switch Im asking about. 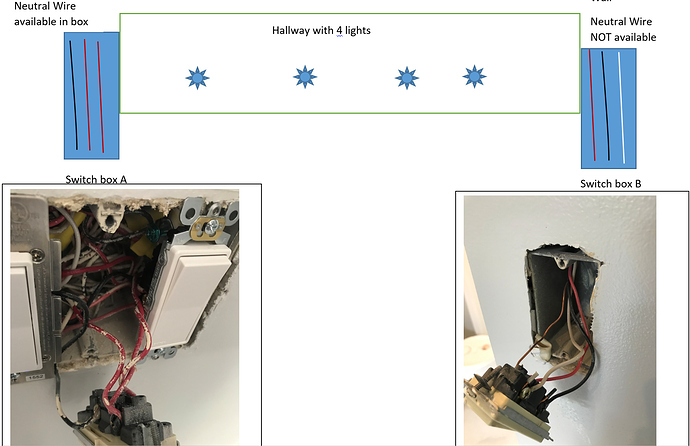 1 - You are correct that you do not have a neutral in Box B, but you don’t need one.

But IN THEORY if you do have a constant hot and neutral from the same circuit in you could use either a GE or an Inovelli in Box A. If you use a GE, you’ll need a GE Aux in Box B. If you use the Inovelli, then you can use the existing dumb switch in Box B.

But there is more to it than that. You have to examine the wiring of this switch leg so that you understand it completely. Most importantly, you have to make sure that this particular leg doesn’t have power coming from the light. So you have to figure out how all three conductors in Box B are routed and where they are connected. You also have to figure out where your load (light) is.

The first question I would ask myself is if the switch leg you are trying to re-wire is on the same circuit breaker as the other two switches in the box.