3 Way Wiring - Neutral in One Box

I am trying to install a gen 2 dimmer in a 3 way setup with a GE aux switch. I only have a neutral wire in one box and my wiring does not match any of the diagrams provided. Below is a wiring diagram showing the setup in my boxes. The black coming into the lower box is the hot wire. White wire is neutral. 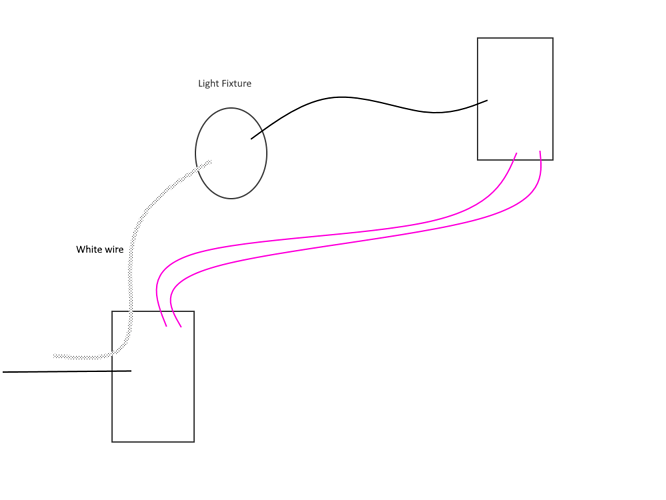 Can anyone provide guidance on wiring this up?

Can we get a picture of the box(es) with the wires extended out? You sure it’s not LINE going to light fixture first (leaving neutral behind), then dropping down to the lower box?

I will snap some pictures tomorrow morning, but I am very sure this is the setup. With all switches removed, the lower black line wire is the only wire with voltage on it.

Not saying you’re wrong, it’s just I’ve never seen that setup before. If the BLK wire in the lower box has 120V, then most likely it’s LINE; is the wire ROMEX or conduit with individual wires running to / between boxes?

Metal conduit with individual wires. There are many unique choices I have found in the wiring of the house so I am not surprised by a unique 3-way setup. I think I can get it working in a no neutral setup, but I would love to be able to get a neutral to the switch to take advantage of all of its features.

Thanks again for the assistance!

Definitely photos are going to help us then since the electrician decided to use BRIGHT colors. The first thing we need to figure out is if your LINE comes to your lower box first or if it goes to the light fixture first. Hopefully, the light fixture is easily accessible for photos too. If the drawing above is correct, then I see a similar wiring job like (https://desk.zoho.com/DocsDisplay?zgId=691830694&mode=inline&blockId=k4wwh5d6bfcdd498a4f65bd232517fc6c61f3) is in order; ignoring the neutral going through the second box and going directly to the light. But I’m having a hard time visualizing this is the way it’s wired. It would mean they ran conduit from the load center -> lower box -> upper box & light fixture. The second box would have conduit from the lower box and light fixture. Seems like extra work bending conduit that way…

So when you have a chance tomorrow take some clear photos of the inside the box and the wires extended out of the box so we can chase the wires.

Will do. The setup in the above link looks like it could definetly work with my setup and a dumb switch. I’m guessing there is no way to do this with a aux switch though since the second box does not have a neutral present?

If you had one more conductor running from lower to upper box, then you could use an aux switch. You need to pass LINE to the light and with only two conductors (load/traveler) then you’re one shy to pass the 120V on. However you may be able to use another Inovelli dimmer if neutral is in the lower box. Basically we could send line and neutral over and setup an association between the two switches to make the 3 way work.

Let’s work on figuring out your wiring then come up with options.