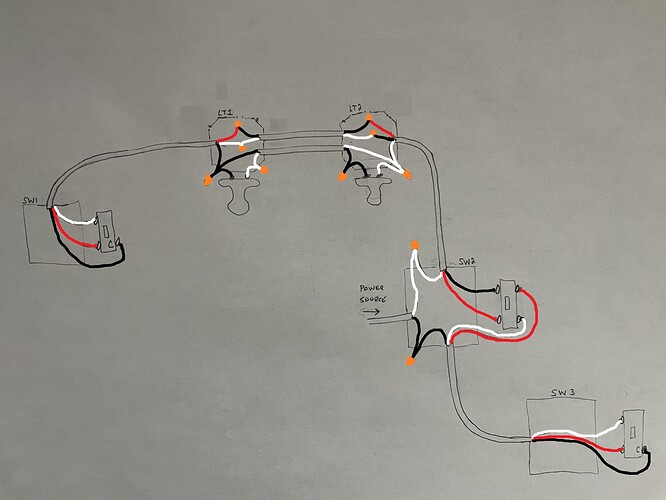 This is my mess of a circuit. Will a LZW31-SN and two aux switches work here?

Potentially yes, but could you label wire colors? I’m having a hard time tracing between the boxes.

I updated the image, hope that helps. The “thinner” black line is the white wire. Apologies for choosing green as the wire nut color

Waiting to see what @harjms comes up with.

In the interim I’m gonna say you could do something with SW2 and SW3 but you’d have to exclude SW1. The Achilles heel is that there is only a 2-wire between the two lights. So you only have room to send a switched hot and a neutral past the first light, with no conductor for signaling.

If necessary, it actually wouldn’t be too difficult to replace the 2-wire between the lights with a 3-wire.

If necessary, it actually wouldn’t be too difficult to replace the 2-wire between the lights with a 3-wire.

Let’s see what @harjms comes up with as-is, but here is the theory if you have a 3-wire between the lights.

The Inovelli goes in SW2. You have a neutral there, so it’s a neutral installation. SW2 and the two lights are then wired as a simple 2-way Line/Load same box configuration. You send the Load (switched hot) and neutral to the lights over the black and white of the 3-wire. You re-wire at the lights and the “other” which I’m presuming are more lights to put all lights in parallel.

So now you just have to implement the Aux switches at the remaining positions. In a neutral configuration, an Aux just needs a neutral and a signaling wire.

So for SW3, you send the neutral from SW2 over the white and the Traveler over the red. The black in the 3-wire between SW2 and SW3 isn’t used.

It’s really this with the devices rearranged: 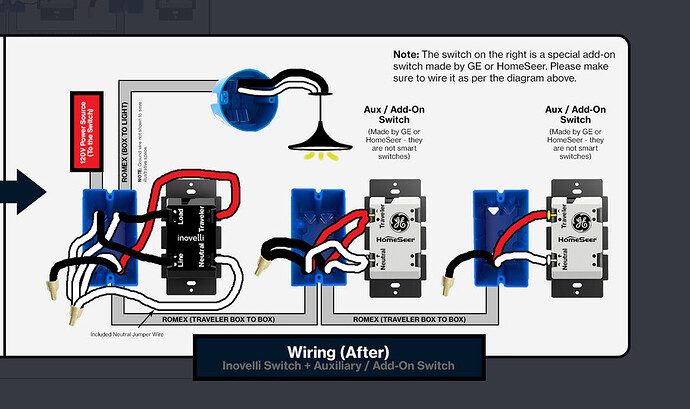 Waiting to see what @harjms comes up with.

Oooof…I always rely on you.

The first problem I see is the WHT from the source is going to the COM on SW 3…I honestly am not following the path. Is BLK Line or WHT line?

If there is a problem with SW1 because of two wire, we could always recommend a dimmer without a load and use association…

Edit: Let me get through my coffee and relook at this cause I’m still draggin…

honestly am not following the path.

I tried following the path too and gave up. It made my head hurt. There is some sort of voodoo hybrid switched neutral thing going on here. Easier just to focus on how to implement the new stuff.

If there is a problem with SW1 because of two wire, we could always recommend a dimmer without a load and use association…

I though of that, but with only a 2-wre between LT1 and LT2, you can only send a SWITCHED hot so no way to power SW1 full time.

I’m glad I wasn’t the only one confused.
I’ve had this whole circuit opened up so many times to double-check everything because when I diagrammed it, it didn’t make sense.
I’ll take another look at things again today. BLK is line from the source.

I’m glad I wasn’t the only one confused.

Yep. It’s not uncommon to drop the line in the middle box with the 4-way switch, but usually there is a 2-wire run to the lights from that box and then a 3-wire(s) out to the switches. But that’s not what you have.

Ugh. I think I screwed up when I edited the diagram and highlighted the black wires. Going back over it again…

Third time’s a charm, I hope. This diagram makes a LOT more sense.

Lol, I guess I got you thinking when I referenced the “other” lights.

This makes much more sense. Way easier with two 2-wires between the two lights.

Pretty much the same as before.

I think that’s it. Make sense?

Awesome, thanks! Will give it a shot this evening!

Everything is working. I’ve been trying to figure out how to get a smart switch on this circuit for years. You guys rock!

Great to hear! Make sure you mark the correct post as solution so we know it is resolved!!!

Everything is working. I’ve been trying to figure out how to get a smart switch on this circuit for years. You guys rock!

Glad to help. Your updated drawing certainly made it easier, LOL.