Adding a bipass to a red series dimmer

I have read the instructions and all the posts on adding the bipass. I still am confused at what to do. I have a non neutral installation with two black wires. The wires have been placed on the correct terminals but the led lights flash and the switch will not turn off. I am using this on a two light led bulbs of 6 watts each. So I am trying to add the bipass to hopefully fix both issues. Attached is the pic of switch and wiring.

Now I need to figure out what to do to install the bypass I bought? 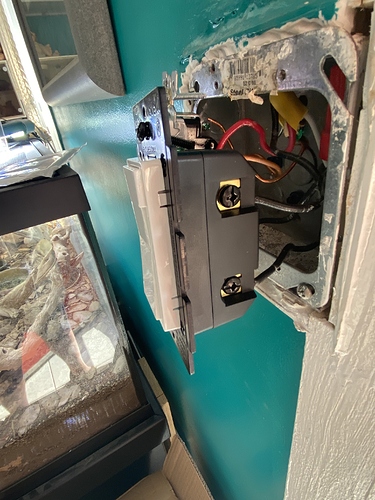 I believe you’ll have to add the bypass at the light since you do not have a neutral in the box. The bypass will connect load and neutral at the light fixture.

Is that white wire running into the corner not a neutral, (without using a multi meter there is no way to know for sure as someone could have used it for something else at some point)?

That is a copper ground not neutral that is used on both switches in the box. Just looks like white from the light reflection.

As harjms mentioned, the bypass will need to be installed at the light fixture. The switch will not power on or work correctly until it is.

I don’t know what type of light fixture you have but if you can dig up an old 60W incandescent bulb and replace your LED temporarily as a test it will tell you if you need a bypass.

If the dimmer works well with the 60W but not with the LED’s then a bypass is in your future.

If however the 60W still have functional issues then there is more troubleshooting to be done.

BTW the bare wire is safety ground, it is very much against any electrical code to be used as a neutral.

I can see the bare copper ground wire, but there is also clear as day a white wire in that bundle not connected to the switch. It’s coming out of the yellow jacket that’s in the top center of the box in this picture and heads down towards the right side of the box somewhere. Unsure to what. But white is typically your neutral wire. Have you tested it with a meter?

The second switch which controls my fan has two wires: white and black plus the copper ground. Not sure why this switch was white and black and the smart switch is black/black.

I see a red wire in the picture too. Is this a 3-way setup?

It would be helpful if you could sketch all the wire in this box and where they go within this box.

Its easiest if you used dashed lines for white and ignore the bare copper wires.
and as @jtronicus asked is it part of a 3 way.

I’ve never seen a 14/2 or 14/3 wire with 2 black wires in the bundle. It’s unheard of.
Having 2 black wires on the switch however is extremely common. Typically in this scenario you’ll have a 14/2 coming into the box, the black would be your line and the other wire neutral. Then you have a 14/2 leaving the box with the black being your load and the other wire neutral. Usually in no-neutral setups you’ll have a single 14/2 coming in and the black will go to line or load and the white will go to the other.

I agree with @John Rob, a sketch of every wire in this box would definitely help. I’m not entirely convinced there’s no neutral in here. BUT, if there really is no neutral in the box, to answer your initial question the bypass will then need to be installed at the light itself since it connects between the load wire coming from your switch and the neutral wire.