Hi all - hoping you can help with some direction on how to wire this 3-way scenario.

I am looking to swap in an Inovelli Red Series Dimmer where the the Existing Dimmer (Lutron DV-603P) is in the diagram, while keeping the Existing Switch. I’m having a hard time determining the traveler vs. line.

The Lutron Dimmer has 3 wires that you splice into, so that is the reason for the Short Black/Reds in the diagram. The orange wire is spliced into the black. The yellow wires are spliced into the red.

(I do have a neutral bundle, not pictured.)

Any help on where to go from here would be much appreciated.
Thanks! 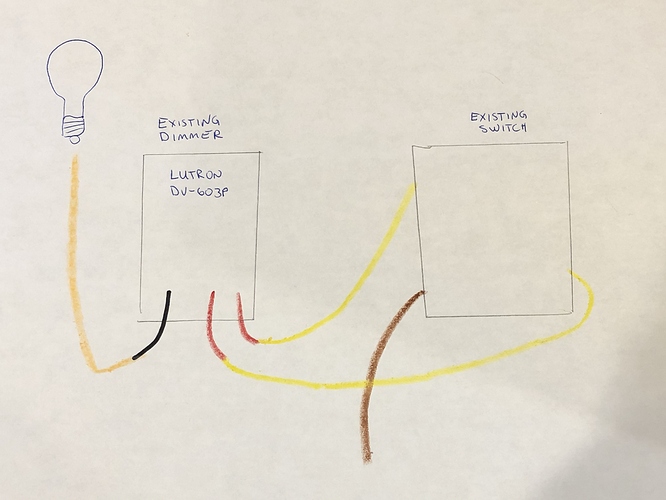 Do you have a multimeter or a voltage non-contact voltage indicator? If so, then I would disconnect the “Blacks” from the switch with the breaker “off”. Then I would turn the breaker “on” and search for the “hot” lead. This is the line “black”. Travelers are not specific in which way they hook up; however you’ll need to know where the load is.

All my 3-ways were Load Center -> Box 1 | Box 2 -> Light. My source and loads were in separate boxes.
The easiest way I found my 3-way wiring for load is to look for the 14-2 coming into the box. For line, I know the black and white would be coming in the same 14-2 bundle. The traveler would be in it’s own casing as well. Then in the other box, I could see the same travelers bundle and see the remaining bundle (load).

harjms - thanks for the quick response. I do have a multimeter and a non-contact tester, but I’m not sure I’m following your suggestion. To clarify, which wires, from the diagram are you suggesting I check?

The Black/Orange wire from the existing dimmer is the Load, since that goes to the light.
The Brown wire is the common (line?).
The Red/Yellow are the travellers.

But I need all of these in the same box for the Inovelli Dimmer and I don’t have that?

@Kesey - So looking at the diagram and using your current setup, I would check the brown wire. The Inovelli needs to be installed at the beginning of the circuit; meaning the constant power from load center needs to be feeding the Inovelli switch. If the two travelers and load (that’s connected in your diagram, Lutron) are the only wires in that box, then I would check the dumb switch for that constant power. It’s hard to see which setup your wiring is (line/load in same box or two different boxes) since there is so many options for 3-way circuits.

I’m just assuming that the load power is in the dumb box and Lutron is connected to the load. If that is true, you’ll need to install the Inovelli in the dumb box location and move the dumb switch into the Lutron location.

OK, that’s what I was afraid of. I 'll confirm with the meter.
Unfortunately I need the Inovelli at the location of the current dimmer. Bummer.

@Kesey - We may be able to get it to work using an Aux switch instead of the dumb switch, but you’ll need a neutral in the box. We would just route the line using wire nut to the Lutron location. Aux only needs 1 traveler and a neutral to connect. How come you need the Inovelli at that specific location?

I confirmed with a meter that the Brown wire going to the existing non-dimmer switch is Hot. I’m open to an Aux switch if that’s what’s necessary - I do have a neutral.

If I’m understanding correctly, I’d tie the brown (line) to one of the travelers in a wire nut and that would then give me the line I need (in the form of a yellow wire/previous traveller) at the current location of the Lutron - since that wire is already going there.

Then I’d have all 4 wires at the Lutron location and only 1 traveller at the non-dimmer - but that’s all that is needed for the Aux.

To answer your question, I need the Inovelli at that specific location because that’s the entrance to the room and I want to be able to run scenes as I enter the room. For example, I’d like to be able to single tap the Inovelli to turn on the recessed lighting and double tap to turn on lamps (via SmartThings). I wouldn’t use it if it were across the room where the current non-dimmer switch is and also the LEDs wouldn’t really visible in that location for notifications.

@Kesey - Correct. I would wire nut the current hot to a “traveler” and make that my “HOT” to the Inovelli switch in the Lutron location. I would wire Light to the Load on the Inovelli switch, Traveler to the remaining “traveler” lines to aux switch, and of course neutral (if present). On the Aux switch, I would connect the remaining traveler to the traveler spot and neutral. Be sure to configure the switch for 3-way momentary and neutral within the Hub. 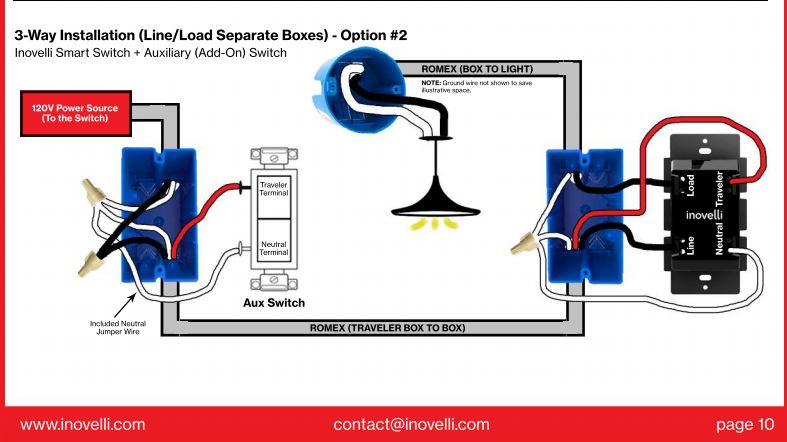 Thank you so much. This has been extremely helpful (even though you cost me another $20

Any recommendations for an Aux switch? I assume the GE is as good as any?

Thanks again.
I’ve ordered an aux switch and look forward to reporting back on success.