Blue dimmer on Hubitat and lights on Philips Hue hub

Hi,
I feel like I’ve seen this covered already in this forum, but I can’t find it so I’m asking again.

I have some Blue Series switches on my Hubitat c-7. I’m trying to use them to control Philips Hue lights that are connected to a Philips Hue hub and grouped by room. I created rules to turn them on/off when the switch goes on/off and one to go to 100% when I double tap up on the switch.

Though, I’d like to avoid re-writing all of the rules myself as I believe that others have already done this. Can someone point me to some Rule Machine rules that I can just import for this? If there aren’t some already, I’ll share mine when I’m done and we can built a repo of them.

Thanks for any advice on how to get this done or links to similar rules.

I’m only using Hues on one of my Blues and I did direct binding in that case, so I don’t have direct experience here, but… I’d use the Button Controller app instead of Rule Machine – it’s just a more intuitive setup for things like switches and remotes.

For dimming (in both Button Controller and Rule Machine), there are “Start raising/lowering (dimmer)” and “Stop changing (dimmer)” options that can be used for upper/lower paddles holds – I’d try those first.

Since the Blue isn’t controlling that load % directly per se, I’m not sure how to get the LED bar to follow to follow the Hue level – I still haven’t played around yet with tweaking the LED bar.

Thanks. I’ll try the Button Controller. I’m very new to Hubitat as well, so I’m not really sure of what the right thing to do is.

For the LED bar, I’ve managed to set its level from Hubitat. So, I’m hoping that I can just set its level after the “Stop changing (dimmer)” part. Hopefully that’ll work.

I’ll give this a shot, thanks for the tip about the Button Controller.

You might want to check out the Switch Bindings app available from the Hubitat Package Manager or from the link below and see how it does at keeping things in sync. 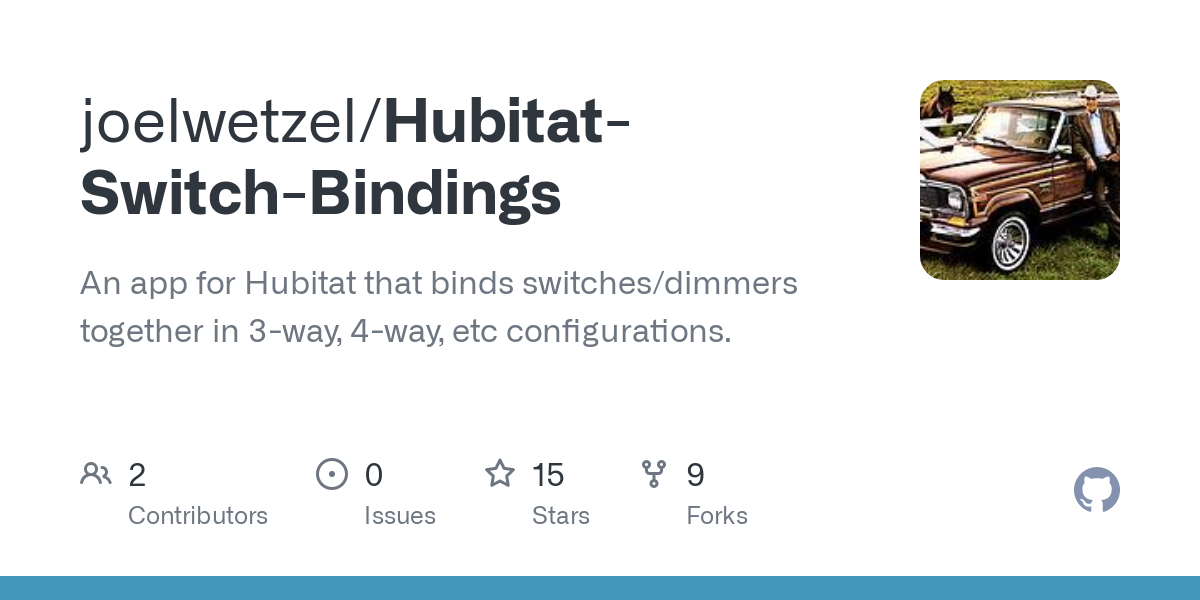 GitHub - joelwetzel/Hubitat-Switch-Bindings: An app for Hubitat that binds...

An app for Hubitat that binds switches/dimmers together. When bound, if either one turns on or off, the binding will make the other one also turn on/off. (It works a lot like a z-wave association,...

Thanks, but I don’t think that I can use switch bindings because that would remove the Hue hub and the Hue app from the equation. I’m specifically trying to keep the Hue hub involved so that I can still use some of the Hue specific features.

The app doesn’t use actual bindings, it emulates them using the hub for things that can’t have direct bindings (probably could use a more explicit name as I thought the same thing when I first saw it).

Oh, I see, thanks.
That sounds cool. I’ll give it a shot.

Thank you both for the help. Though, neither of these options worked well for me when I tried them last night.

With the button controller, I got to the same place as where I was with Rule Machine. On/off works fine, but the dimmer still doesn’t work in the same way that it does with Rule Machine. If I click on “run action” it dims the lights, but when I hold the button on the switch, the lights do nothing. Though, I see the event in Hubitat and it shows that it did trigger the app.

With the Switch Bindings app, there were more issues. The dimming just didn’t work, and the on/off taps only worked most of the time, sometimes nothing happened, sometimes the response from the lights was very delayed (like over 5 seconds).

One suggestion you might want to play with, on the switch configuration that is in Smart Bulb mode, I have the dimming and ramp rates set to instant (options 1 through 8). I then set the ramp rate on the actual bulb devices.

In my Kitchen I have a Blue switch in smart bulb mode controlling 4 Tuya WiFi color ceiling lights using the app I suggested. The on/off is very fast and reliable, the dimming is usable but still not perfect.

Unfortunately, I still can’t get the dimming to be reasonably fast with the binding app. I’ve tried a few things, including the ramp rate changes that you suggested and nothing has worked so far.
If anyone out there has a set up with a switch that can dim your hue lights through a hue hub and hubitat, I’d love to know more about that setup.