So it’s all in the living room. But anything labeled “living room” is the main area and where i want to have the inovelli (where the innoveli currently is)
The dumb switch pics with the outdoor timer adjacent to it is 15ft away in the same room, and that has the messier box.

I’m just trying to attach labels to the two boxes so that we’re both on the same page.

So we’ll call the one with the two 2-wires and the 3-wire the Living Room box. We’ll call the box with the switch with all three conductors attached to one Romex the Other box.

I think I see what you have, but the colors attached to the common terminals don’t make sense to me (at least without drawing it out).

So right now you have the dumb switches wired in BOTH locations, right? Is this working properly? In other words, can you go back and forth turning BOTH switches on and off and they function correctly?

We have the names swapped tho.

So i attached a photo of them side by side with the titles.
(At one point i did attach a photo of the living room prior to installing the inovelli. That showed the prev dumb switch hooked up but it is no longer wired.)
As it currently stands it looks like this photo with the inovelli in the living room box and the other box has not been rewired at all. The other box is where the dumb switch shall stay.
Sorry for the confusion. Appreciate the help. 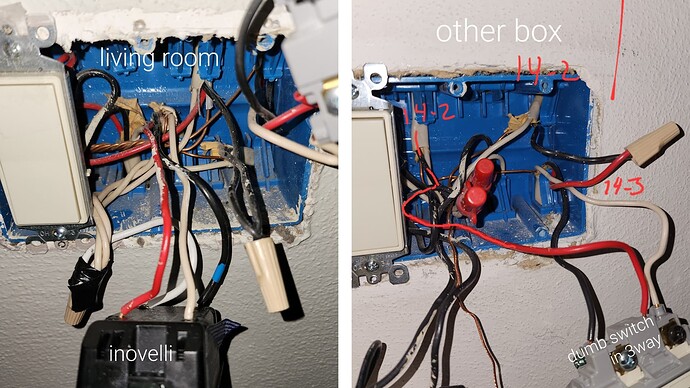 So I drew out what I was seeing and I understand how it works. Certainly not the norm, but there are no absolutes when it comes to color codes.

What you have is a Line/Load in the OTHER box. The Line should be the 14/2 in the OTHER box coming in at the top right. To confirm, pull the cap off the red/white connection and meter between the black and the white bundle. You should have 120VAC. 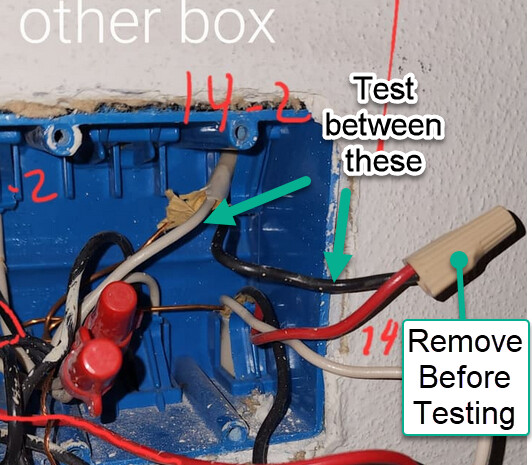 And just so you’re aware, in this case your wiring will dictate where the Inovelli goes. Probably going to be the OTHER box if you want to use an Aux or a dumb switch.

Thanks. I will be able to test that tomorrow.
So the inovelli cannot stay in the living room box at all? Not even with an aux switch in the other box?
I can move the innoveli but that was not the preferred location lol :[

So in a 3-way neutral, the Inovelli needs four conductors if it’s in the LIVING ROOM box, Line, Neutral, Traveler and Load. But there is only a 3-wire, so you’d be one conductor short.

It MIGHT work if you make the Inovelli in the LIVING ROOM box a non-neutral. I hesitate to recommend a non-neutral because of the other issues it can induce, such as needing a bypass. But I suppose you could try it to see if it works.

You could also consider Inovellis in both boxes. You’d have to bind them using Zigbee binding, since they can’t communicate via a wired connection. 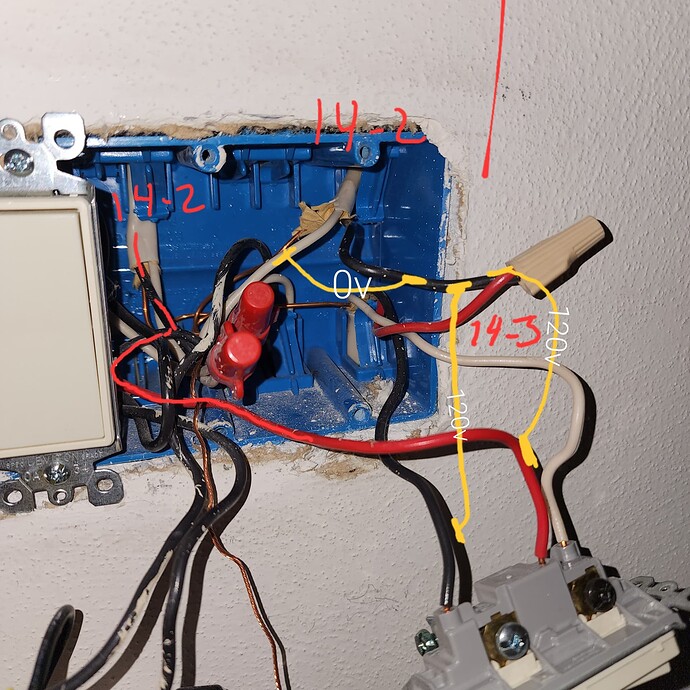 Otherbox. U asked for black to white and i got 0v.

Ok, thanks. I’m guessing the hot is the 14-2 at the top left then. I would test that one. Remove the red pigtail and test between the black and the white neutral bundle.

Just so you’re aware, both @harjms and I have looked at your wiring configuration and unless there is a hidden j-box somewhere, there just isn’t any way this will work correctly wired as-is. I asked before about if this is working correctly with all the combination of switches but I don’t think you advised.

Look at this drawing and confirm the connections are what you have. Then trace the wiring path from the hot to the light with all four switch combinations and you’ll see what I’m talking about. You can do that using either of the 14-2 as the hot and the paths in the drawing won’t work. Double-check the connections on the drawing please.

In the ‘living room’ box there was a 14-2 line wire coming up from the breaker shown in the bottom right corner. This was powering another switch in the box. I added a wire from the line of the switch to the black-black connection. Then wired our 14-3 cable as shown in the line/load separate boxes(neutral wire setup). In the ‘other’ box, the 14-2 cable in the top right went to the load so i attached the black to the dumbswitch common and wired the red and black from the 14-3 cable as shown in the diagram from the Line/Load separate box (neutral wire setup). The 14-2 cable coming into the 'other box previously acting as the line for both switches was disconnected and capped off.
All is working as intended now from the inovelli and dumb switch in the 3 way. It was confusing for sure. Appreciate the help and made me dig into it a lot more than originally comfortable.

What a whirlwind of events. Glad you managed to get it together. It was definitely throwing us through a loop.

Glad you got it going. So at least now you have it wired with common wiring conventions. We’ve seen a lot of whacky stuff here, and yours is up there in the rankings, lol.

One thing to double-check. If the hot that you are now using is on a different breaker that all those in the Other box, make sure that the neutral you are sending to the Other box is not bundled with that big neutral bundle. The grounds, however, should be all bundled together regardless of branch circuit.

Yes. This is why my wife never believes me when i say a home automation project will only take 20min.
There always seems to be a hidden surprise somewhere

Regarding the neutral bundling, what is the reason for not tying those together if theyre all neutral?

what is the reason for not tying those together if theyre all neutral?

Several reasons. The NEC prohibits for both safety and performance reasons. If one fails, the other will wind up carrying the current from both branch circuits. It can also wind up carrying current if you only throw the one breaker not realizing it’s potential to the other. tI will also cause AFCI breakers to trip.

That’s assuming they were on separate breakers tho correct?

i have much learning to do in the electrical dept. Thanks again
@harjms too

@7becker7 is this resolved? Please mark solution if so!