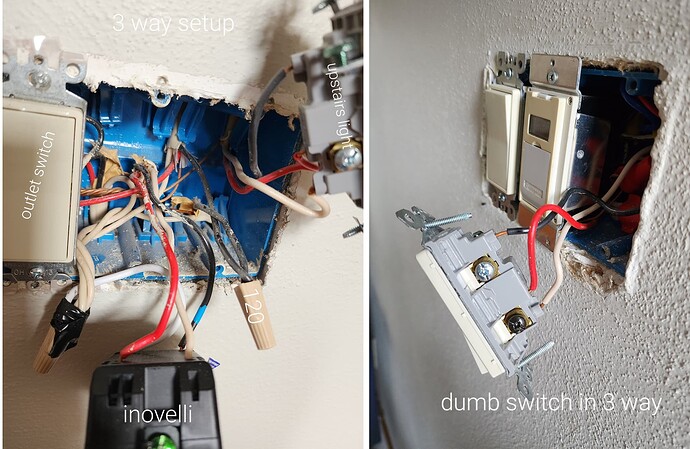 You sure you have the right line? I would think the line would be attached to that 120 cap on the right.

Thanks for commenting. I only removed what was in the previous dumb switch. Added the white neutral jumper and that was all i did. I did test that two wire black bundle and saw that was 120v tho.

So quickly looking. It looks like line comes into the box with the Inovelli, but is immediately jumpered to your box with the dumb switch via the BLK wire in the 14-3 bundle.

Do you want the Inovelli is the box it’s currently installed or the other box?

Would like it to be in this box it is currently in. Did read about the switch having to be in the line box tho

I may have jumped ahead. Zooming in it looks like I was looking at the wrong 14-3 bundle.

Can you take some more pics of the 3 way box? 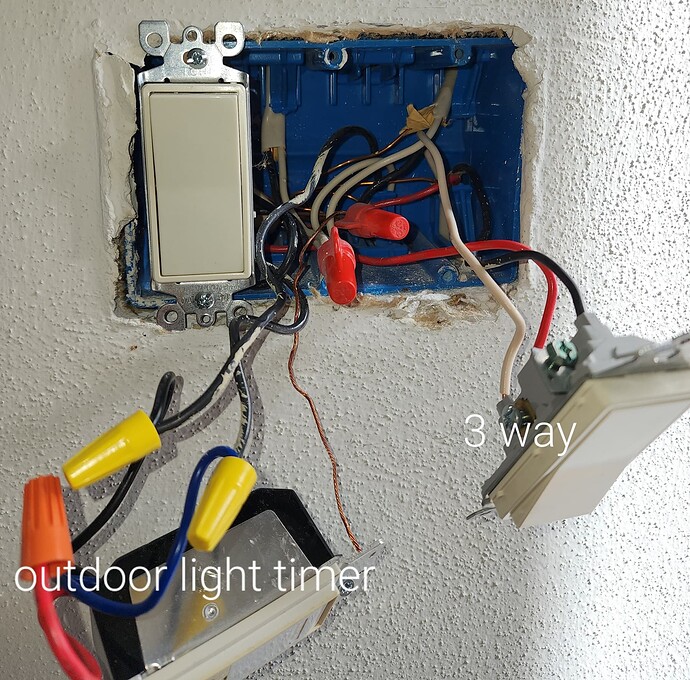 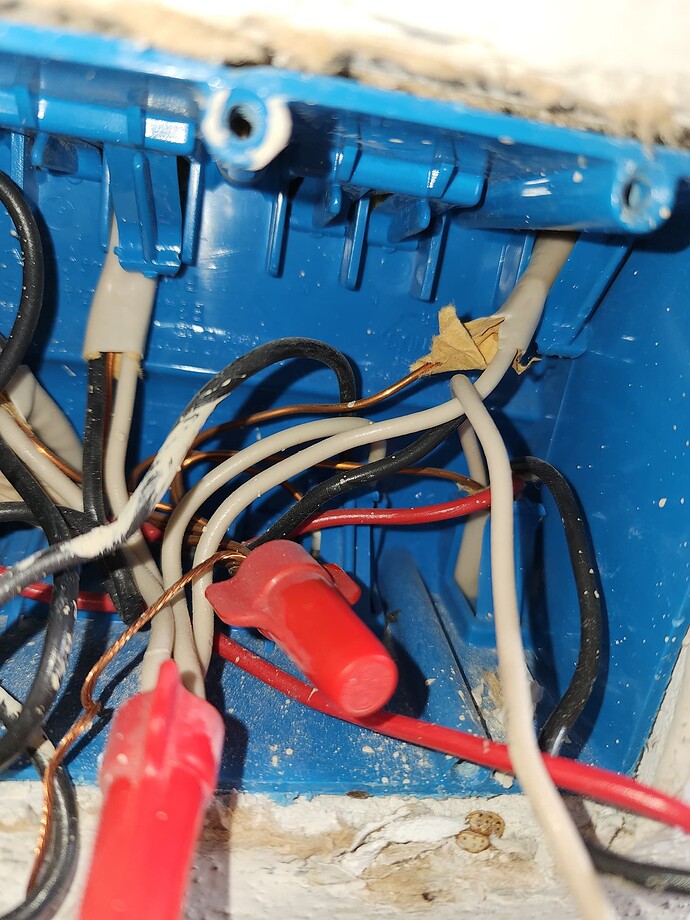 Hmmm. Does the white wire loop around and down into the 14-3 bundle?

from the dumb switch the white wire does go down to the right in the box.

Got caught up with some chores. I’m trying to figure out the logic here. Can you test the white wire connected to the black screw on the dumb switch? Trying to figure out where the hot line is. It may be line to light first then drops down.

@bry - what you thinking.

No worries. Dumb switch white wire has 120. Then i tested red and black and all have 120 with respect to ground.

@bry - what you thinking.

It’s a little tough to trace the connections from those pics. OP, do you have pictures of the connections when you first pulled out the switches before moving things around?

Regarding the connections to each of the dumb switches in the original configuration, were all three conductors from the same Romex (i.e. red, black and white) attached to the switch? In other words, if you pulled the original switch out and traced all three insulated conductors back, did they all trace back to the same 3-wire Romex. Same thing for the other switch?

Hello, thanks for the input.
Just this photo prior to disconnecting anything. Then added these wires plus the neutral in the back to the innoveli. Thats all i moved.
Upon looking closer the dumb switch has some wires split up that u cant see in the photo and i didnt notice until now. The red is only a jumper that feeds into a black coming from a 14-2. Adding new photo. 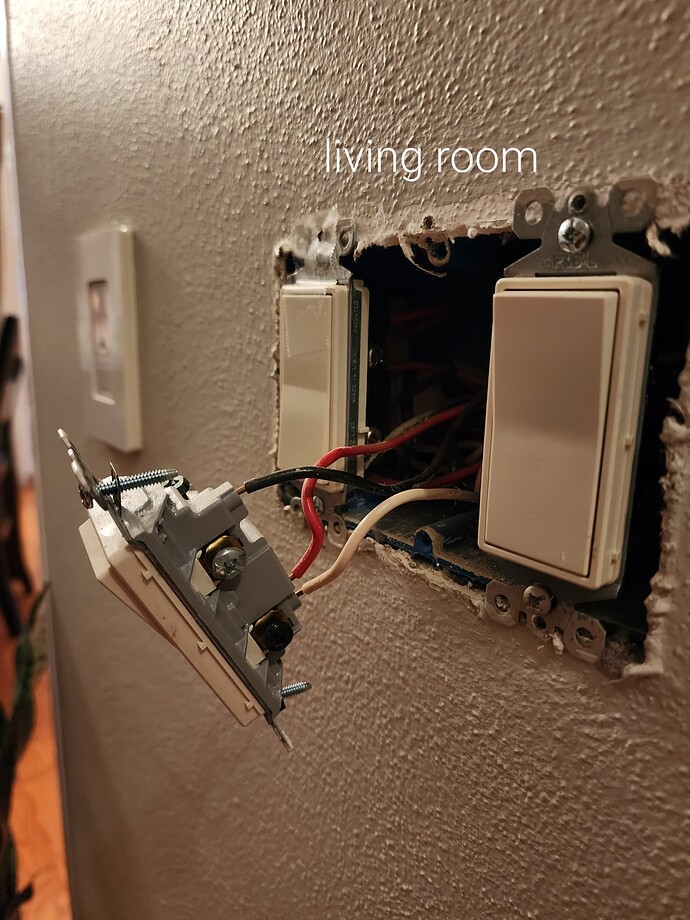 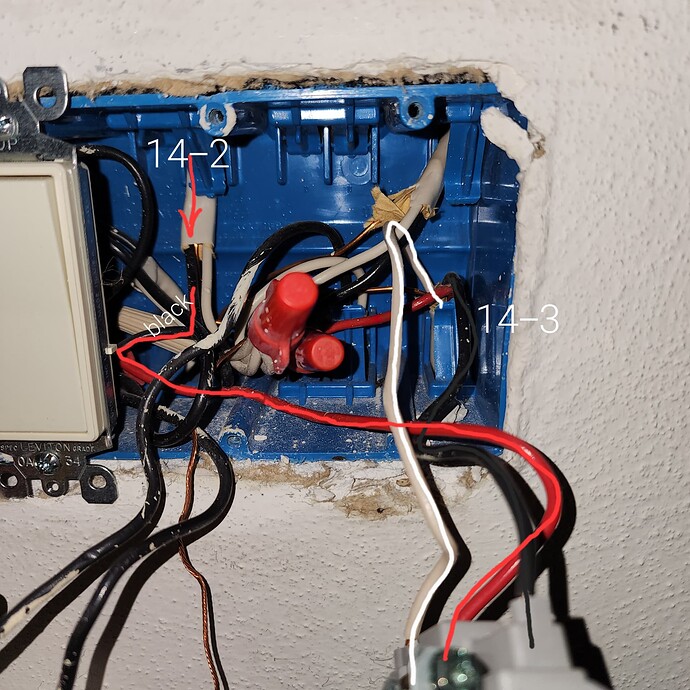 The 14/3 in the lower right corner:
Where is the red conductor connected? It looks like it’s capped with ??? 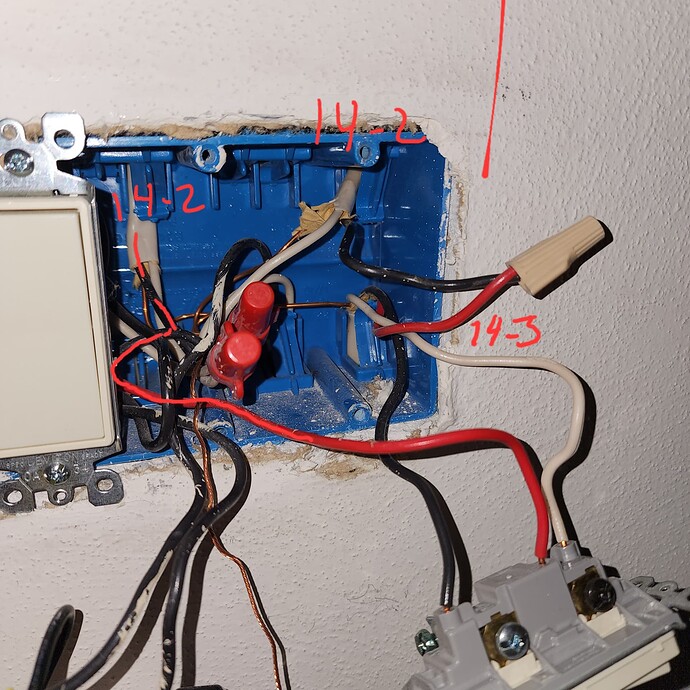 In the gray living room box, the conductors on the dumb switch all go to one 3-wire Romex, right?

In the gray living room box, which conductor is connected to the common (black) terminal? Tough to tell since it’s backwired.

Correct. Living room box all wires connected to innoveli go into one romex. Wiring to the prev dumb switch, common was the bottom white wire. 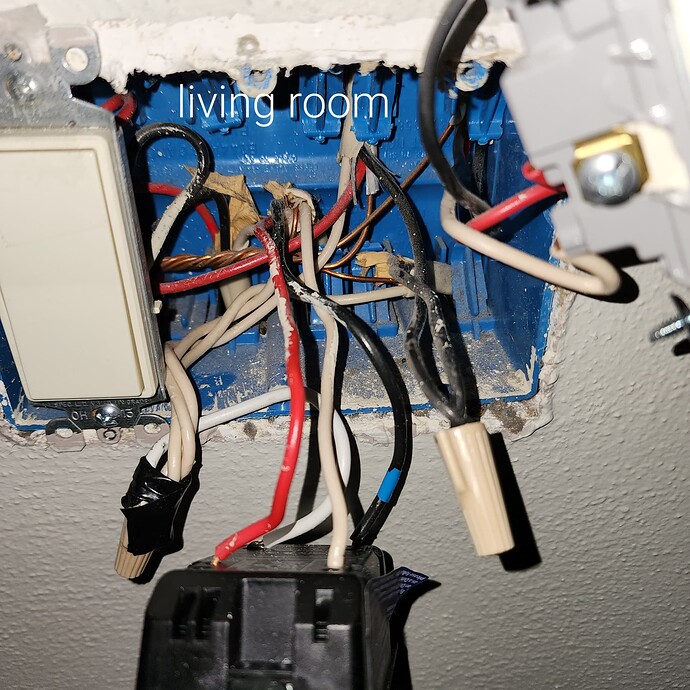 Wiring to the prev dumb switch, common was the bottom white wire.

I was referring to the living room gray box. For that switch the white was connected to the common terminal? Confusing since you followed up by posting a pic of the other box.

this is the box with the inovelli and the other one will have the dumb switch remaining.

What room has the dumb switch with all three conductors connected to one Romex.

What room has two 2-wires and one 3-wire involved with this switch leg?