Can I replace one of the 4-way Indoor Lights switches with an an LZW31-SN?

I’m trying to figure out if I can use an extra LZW31-SN that I have (not as a dimmer, just an on/off) on this 4-way circuit. It doesn’t seem to match either of the examples given in the diagram. I think it’s using a common-hot instead of a common-neutral (if that is a thing). I seem to have both a hot and a neutral in Box 2. But I’m not sure what would be the “load” and “traveler” in my case. It would be awesome if I could replace the switch in box 1 or 3, but I think I could fit it in box 2 if I had to.

(I tried to search for something similar but didn’t see anything, hard to tell each individual wiring situation.)

You have to draw out your topology to make sense of what you are trying to describe. It sort of sounds like your hot feed is going into Box 2, which would be the 4-way switch, perhaps? If you can draw out what you have then we can give you some guidance.

Hmm are you not able to see the link (Google Drive link)? It’s a PNG file of my hand-drawing of the circuit.

From what I can tell the only thing that is hot is the one wire labelled “Black (hot)” that goes into Box 2.

I can see it, I’m just not an electrician :). Just wanted to confirm so you knew.

Hmm are you not able to see the link

I can now. It didn’t resolve before. I’ll take a look.

I seem to have both a hot and a neutral in Box 2.

After looking at your drawing, I dont see neutral in box 2. It looks like a switch loop for both sets of switches (inside/outside). Inovelli will go in box 3. With some rewording it could be possible in other box but I haven’t mapped it out yet (no guarantees).

Edit: after more discussions, you’ll need to use aux switches in a non neutral setup thus leaving the option of box 2 where the Inovelli will go.

So this is based solely on your drawing.

It appears your hot feed is coming from the lights at the lower left. (You have the hot and neutral shorted, but I think that is just a mis-drawing.)

The hot w/o a neutral starts in Box 2, and gets sent to the far box (which is normal for dumb switch wiring). So I would put the Inovelli in Box 2 as a non-neutral. Grab the hot for the Line terminal and that weird white/black combo going to the bulb for the load.

Get this going as a 2-way first. If that works, then use the 2 conductors between the remaining boxes to send the hot and traveler to the two other boxes that need to have Aux switches. You won’t be able to do a non-neutral with dumb switches.

@harjms and I just talked about this, but I’m not sure why he is thinking box 3. To me, box 2 seems the simplest.

(You have the hot and neutral shorted, but I think that is just a mis-drawing.)

Is that what you thought was a short?

So from my experiments, the hot goes into Box 2 (left cable in the drawing) and then goes straight to the switch in Box 3 (does not connect to the Indoor lights in box 2).

I’m pretty sure the white going in that same left cable in box 2 is Neutral. Even with things disconnected, it was 3V relative to ground and 116V relative to hot. I have no idea why not 0V to ground. this goes to a sub-panel where they shouldn’t be bonded, maybe that has something to do with it).

Does any of that make a difference in your recommendations?

Ok, my line drawing didn’t work at all… Here is a picture of what is or isn’t connected in how I’m drawing it.

This is what we were thinking for flow (pre Inovelli)

Red is line coming from the BLK of the 14/3 (ignore the red not reaching to the wire nut)
It jumps over to box 3. Then it utilizes the travelers from box 3 to box 1 (green). Then another set of travelers from box 1 to box 2 (yellow). The you load is connected to the 3 way switch COM to the light (blue).

With that wired and flow that way, there’s no neutral in box 2. 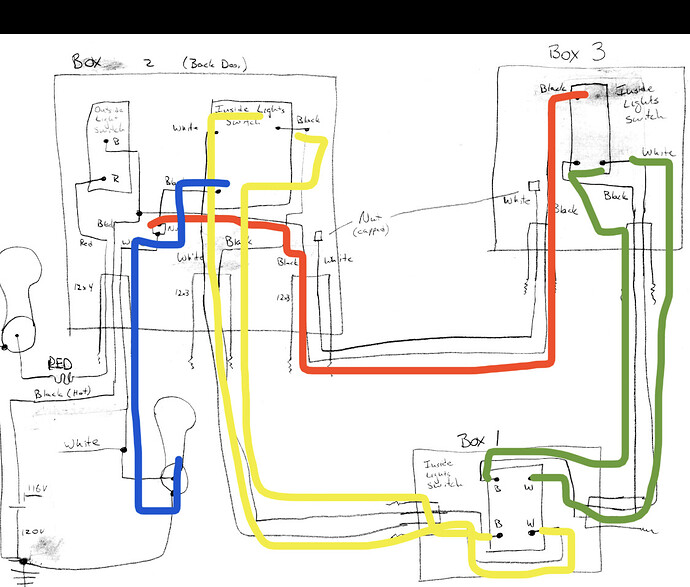 Does any of that make a difference in your recommendations?

No. Easiest is a non-neutral in box 2.