I’ve installed a Red dimmer switch (LZW31-SN) as part of a 3-way circuit to control a ceiling light. The other switch is a completely dumb on/off lever switch. When I first installed the Inovelli switch last night, it would turn the light on/off and the dumb switch worked as expected. I was not able to get the Inovelli switch to work as a dimmer, although the blue light on the switch would progress up and down as if it were dimming the light; it only worked on/off.

When I screwed the unit fully into the wall and I turned the power back on, the unit did not work at all. Nor does the dumb switch. I tried the air gap reset method several times, but this had no effect. The unit does not power on at all: no LED indicator and no functionality. Another smart switch (TP-Link) in the same wall box continues to work fine. The dumb switch does nothing.

I’ve checked the wires for connections, tugging on all wires to make sure that they’re solidly connected. They all are. In the box the neutral wires are all joined with a wire nut and they are secure. The load wires are connected with a wire nut and are secure. (Both the other smart switch and the Inovelli switch connect to the same load wire.) The traveler wire seems solidly screwed into the Inovelli switch. At the dumb switch, I’ve tugged on all the wires and they are solidly connected to the dumb switch.

Any guidance would be very appreciated! I have a voltage tester. I’ve checked that power is reaching the load connection of the Inovelli switch. At the dumb switch, there is no power to any of the wires.

The circuit seems to send wires from the Inovelli switch’s box up to the ceiling light and down the other wall to the dumb switch. In the ceiling box, there are two red wires joined with a wire nut. Also a black and white wire are joined with a nut. Black and white wires descend to the fixture. The two bulbs in the fixture are dumb LED bulbs, probably about 10W each for a total of 20W.

Is this a faulty unit? 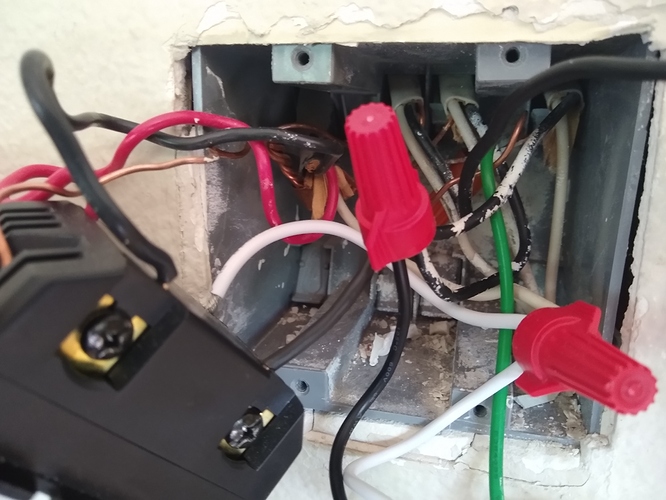 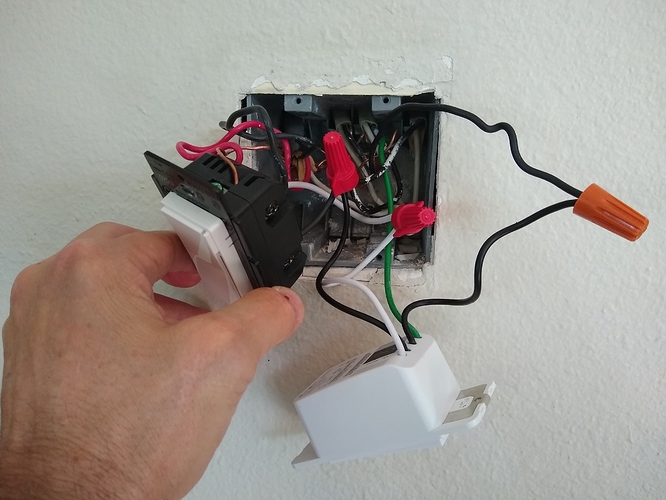 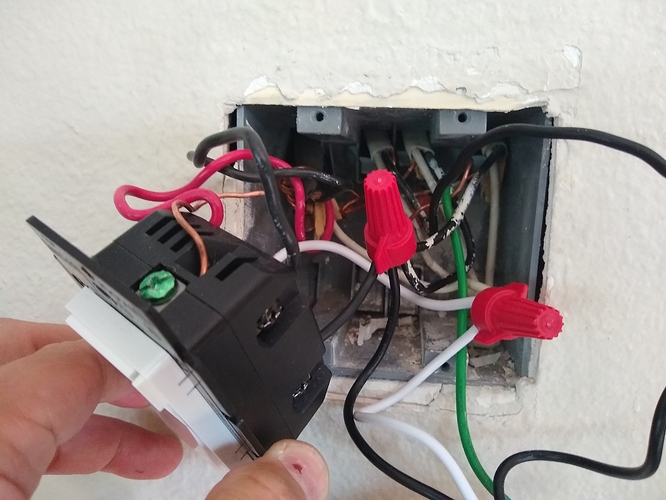 If you can test the Inovelli out of the wall with a CPU cord (C13 cut off) and see if it powers up. You may just have a dead switch.

Would that mean plugging the load and line wires into the two slits of an extension cord socket?

If you have an extra CPU cable not being used, cut off the receptacle end, and wire it into the switch as you would from the wall. Then plug the male end of the cable in to an outlet (avoid the terminal lugs on the switch). If it powers up, then it’s not dead. If not, most likely dead.

I think I have such a cord. Inside, there are three wires: brown, blue, and yellow/green. Which ones would I connect to which ports on the swtich?

Do you have a multimeter? Ground is the circle peg, big spade is neutral and smaller spade is line. You’ll have to meter it out if not standard black, white, green wires.

Thanks. I’ll give it a try.

I connected the line wire to the line, neutral to the neutral, and ground to ground. Plugged it in. No response at all from the switch. Dead? If so, how to I get a replacement? Thanks!

You’ll need to get an RMA. @Courtney_Inovelli can you help with the RMA process?

Also a black and white wire are joined with a nut.

This is what you described in the light box. Did you test that for voltage? Usually when a white and black are connected together, the black is passing voltage to the white in a non-neutral configuration. I’m wondering if you don’t fully understand your wiring.

I didn’t change the wiring in the ceiling. The white-to-black was how it was when I checked it during installation and is how it is depicted in the Inovelli wiring chart. It’s the “Load in both Boxes” diagram at https://support.inovelli.com/portal/en/kb/articles/inovelli-wiring-diagrams-dimmer-switches-gen-2. It’s the third one down in the " 3-Way Installation (Using a Dumb / Existing Switch)" section. That shows two red wires connected with a nut, a white and black connected with a nut, and white and black going to the fixture. Just what I have.

I’m not an electrician by any means. I did test the voltage at both boxes and they matched the diagram. I’m pretty sure I wired it up correctly.

Does the white - receptacle next to it work? Take a picture of the back of that so we can see which wires go to what. My red wire was a “load” wire and had to go on the load for my switch.

I’m pretty sure I wired it up correctly.

Yep, as long as you confirmed that you have a single 3-wire in the other box the white to black is normal. Agree w/ @harjms that it’s probably dead.

Yep: the white TP-Link/Kasa smart switch works great. I can’t take another picture because once realized that the Inovelli was dead, I replaced the dumb switch to avoid problems with the family.

As for the TP-Link/Kasa switch, it’s a single-pole switch for another light. It was easy to wire: white to the neutral, black line to the line, black load to the fixture, green to ground. The black to the line goes to the same bundle of black that I used for the Inovelli line.