Finally got around to installing my new Aux switch last night. Install went fine and wired it to match this wiring diagram

Upon restoring power it worked. Not as well as I hoped, but turning the light off and on at the Aux switch worked more or less. I configured my Red switch to use a momentary 3-way and left it for a few hours.
After turning off the light at the red switch, it turned off like normal and I heard the internal relay click.

Now the switch is completely unresponsive. Cycling the power to the switch has no effect. This switch was working fine before I installed the white Aux. I have confirmed applied voltage to the switch and wiring.

The aux switch is a very basic device and the only time it comes into play in the circuit at all is when the buttons on the switch are pressed. When you say you are cycling power to the switch, how are you doing it? The best thing you can do if you suspect a wiring issue is to undo what you did, but I don’t think the aux switch itself is part of your problem.

Cycling power =turn off breaker. I have already reset the wiring to a basic none three-way config as part of my initial troubleshooting.

So what is your current configuration and situation? You have it wired as a 2-way but the switch is not responsive? Does the switch power up and not work, or not power up at all?

Can you post pics of the switch and Aux pulled out of the box so that you can clearly see the conductors and their wiring, and into the box?

I don’t think the Aux killed the dimmer, but let’s see if we can figure out what is going on.

Current Configuration: Red Dimmer wired as without Aux Switch connected. Current Situation is that the Red Dimmer appears to be completely dead. No lights functioning, No power up AT all.

I find it hard to believe that changing from a Dumb switch to a Aux switch could kill the dimmer, but the dimmer was working flawlessly before I changed the dumb switch out. 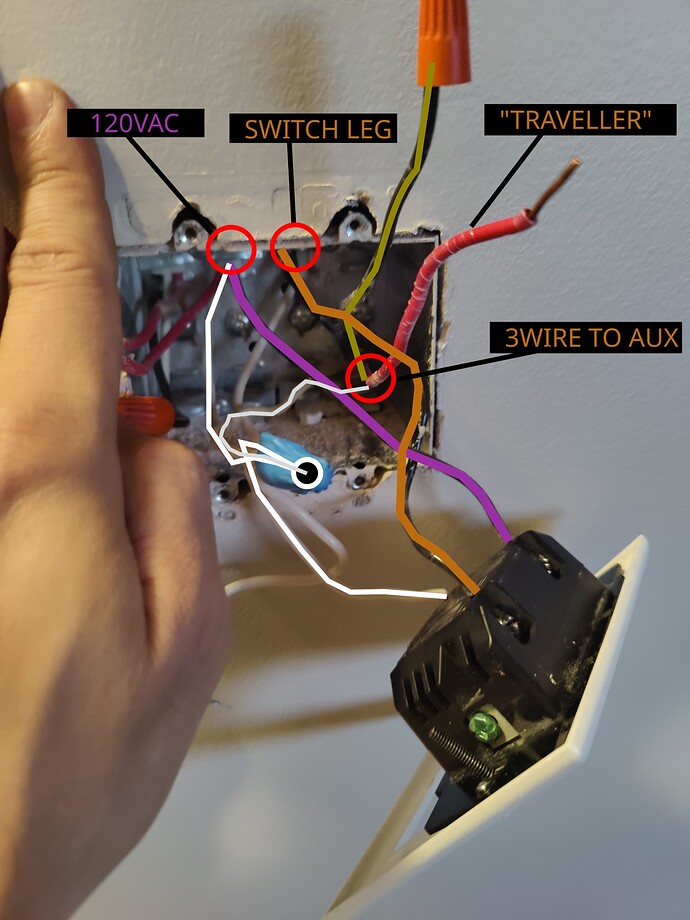 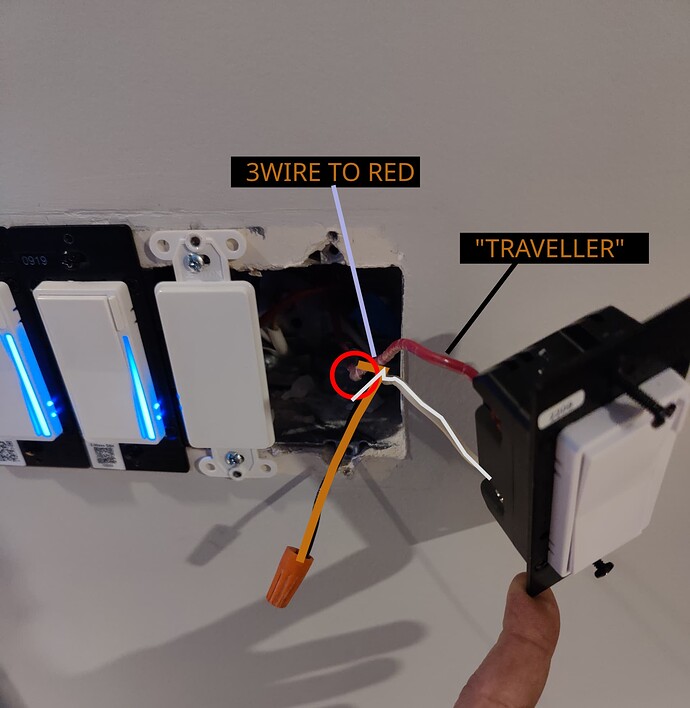 And Lastly, the Red Swtich with no lights on. 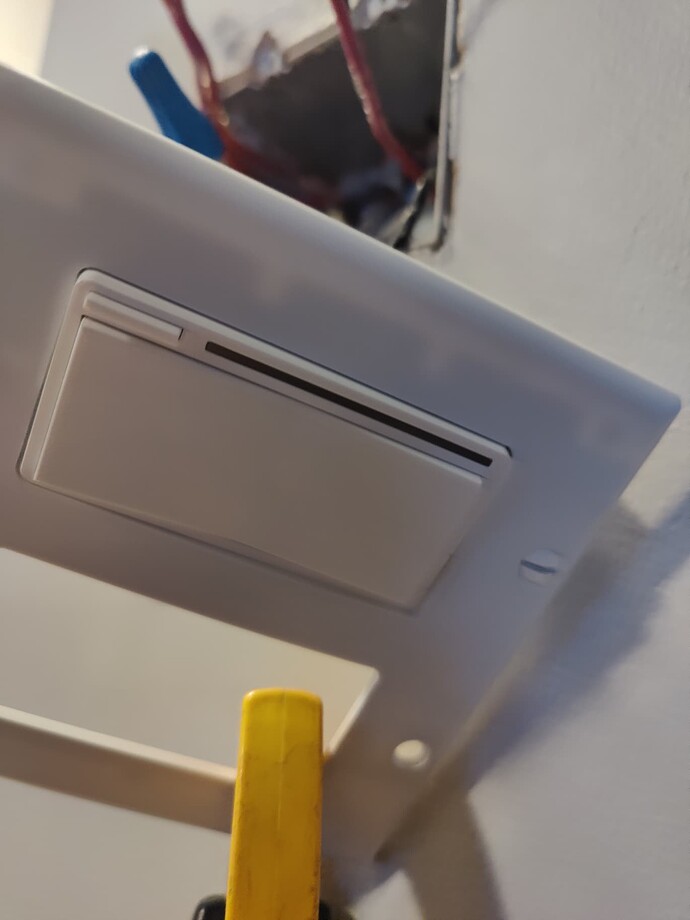 I agree that simply adding an Aux should be seamless.

What sort of electrical testing device do you have? Meter, proximity tester, etc? If you have a meter, remove the switch leg black from the dimmer and test between the white bundle and the outside surface of the Line screw. Presumably, with the switch leg disconnected, you have 120VAC.

When you installed the dimmer, did you test the two 2-wires to determine which was the line and which was the load? Don’t want to insult your intelligence, but you’d be surprised how many people don’t test and just wing it.

I’d remove the line and load conductors on the Inovelli and reseat them, making sure that the conductor is between the backing plate and the screw, not behind it. Run the screw out to the stop and visually inspect to insure the backing plate is sufficiently away from the screw head.

No worries about insulting me…. Full disclosure, I am an electrician. I am using a clamp on multi meter.

There are two branch ccts in the JB, one is tied to a older zooz 4 way setup. I have confirmed that the wiring is as per my pictures, though I can see why that would cause issue for others.

I have tested 120vac to gnd and to the neutral. The incoming voltage all checks out. Bypassing the switch entirely causing the light to come on.

I’m out of suggestions. Wiring looks fine to me as well.

As you’re aware, I asked about the two branch circuits because of the single hot conductor as opposed to a feed via a daisey chain or bundle.

The switch should power up with just a hot and a neutral, and it’s not doing that. Unfortunately, to quote Dr. McCoy, “He’s dead, Jim.”

I agree. Can’t really say wiring is wrong if you’re an electrician (well I would hope, but I still see master electricians double tapping breakers so…).

It may just have died. Maybe under warranty still?

Completed some disassembly on the switch. 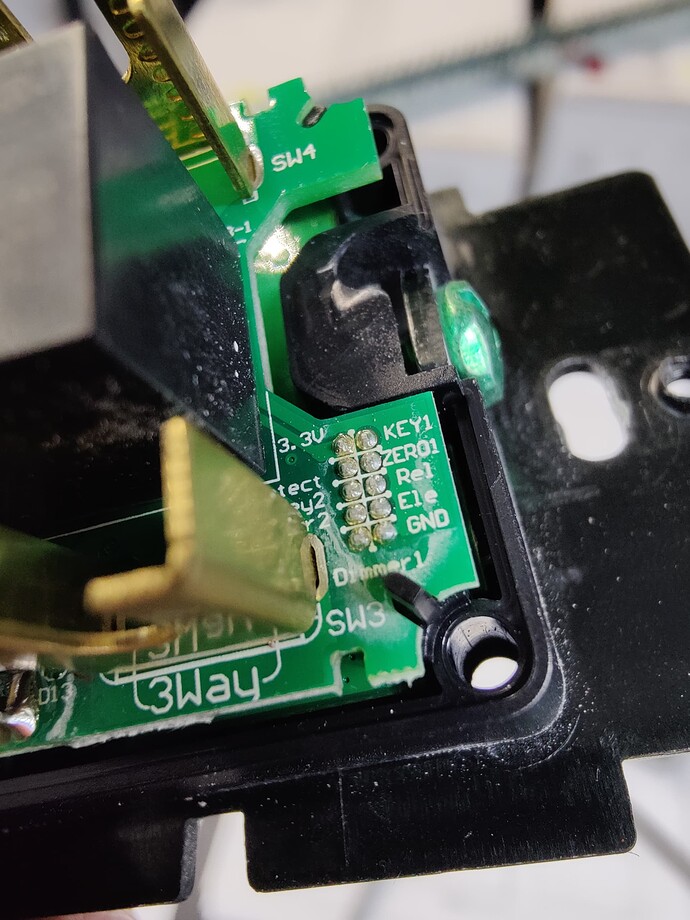 Compared to a good one 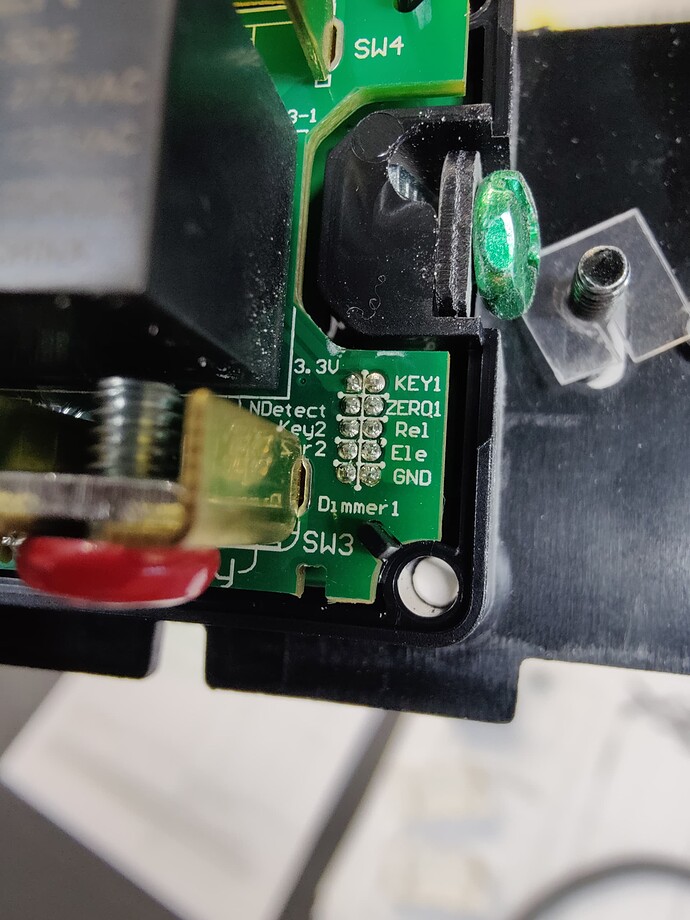 IMG202211271444191920×2560 290 KB
The smoke definitely got out. Now the question is why. I don’t dare replace the switch without some further insight. Given where the damage lies, it definitely looks like it’s related to the Aux switch. Would like to better understand how the neutral is used at the Aux switch to provide a pulse to the red switch on the traveller.
Eric_Inovelli November 28, 2022, 6:07pm #11

I think the root cause is obviously the vertical screws. They need to be horizontal.

Kidding, I know I’m the outlier when it comes to vertical vs horizontal.

I’m not sure what happened here if I’m being honest. The aux switch is a basic momentary switch where the smart switch detects a change (I can’t remember if it’s via the traveler or via the neutral) and acts accordingly.

Anecdotally, I’ve had the aux switches hooked up to the Red Series for about a year now and never have seen any issues, and I just did a quick scan of our ticketing system and didn’t see anyone else have this issue, so I’m pretty confident it’s not the Aux switch.

The part I do find interesting is this:

I configured my Red switch to use a momentary 3-way and left it for a few hours.
After turning off the light at the red switch, it turned off like normal and I heard the internal relay click.

The internal relay shouldn’t click if it’s hooked up to an aux switch, this is only supposed to happen if the switch is wired to a, “dumb” switch. So, I’m not sure what happened here. Even if you change it to the wrong setting, it should override, but maybe something happened and it didn’t? I’m not sure honestly.

What I can do is obviously replace it for you, but beforehand I’ll program it to work on an Auxiliary Switch, this way we can rule out any sort of issues there.

Your wiring looks fine to me too for what it’s worth, but I’ve also seen some crazy things in my tenure here. Recently I installed a GFCI outlet and whenever I turned off a light on a separate circuit, it would pop the GFCI. Everything seemed to test fine and honestly we never figured it out – this between myself and my dad who is an electrical engineer.

Anyway, point is that I can at least take some pressure off you and test the replacement switch in a 3-Way w/Aux setting so we at least know that works.

Thank you Eric. I really appreciate it.
I had a new theory this morning, the switch adjacent to the inovelli red is a dumb switch tied to an old zooz zen22(?) Wired like this:

The zooz and the inovelli red are using the same neutral. Could be possible that one interfered with the other?

The zooz and the inovelli red are using the same neutral.

I know you have two branch circuits in that box. Did you share a neutral???

The Inovelli was separately fed, which suggests the Zooz is on the other branch circuit.

I just looked again, I assumed that I had two seperate CCT’s in the box due to the three wire configuration for the feed. Both switches are on the same circuit.
It’s been years since I initially installed the Zooz switch and I wasn’t really paying attention to it as it was a working installation.

TLDR: Same CCT and a common neutral for both switches.

TLDR: Same CCT and a common neutral for both switches.

Got it, but still curious and so you know what made me ask. You have a single hot conductor going to the Inovelli. What is feeding the rest of the box? Has to be something else, right, because the neutrals are bundled. 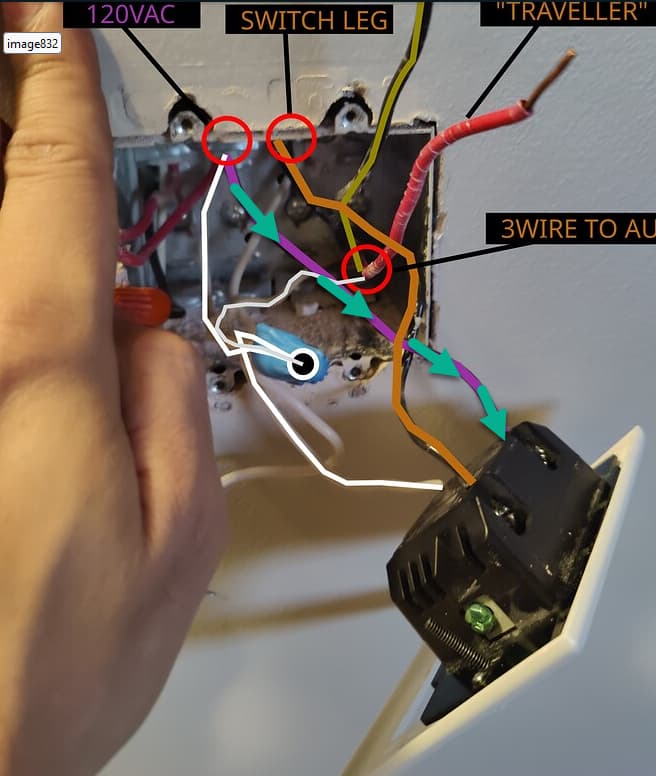 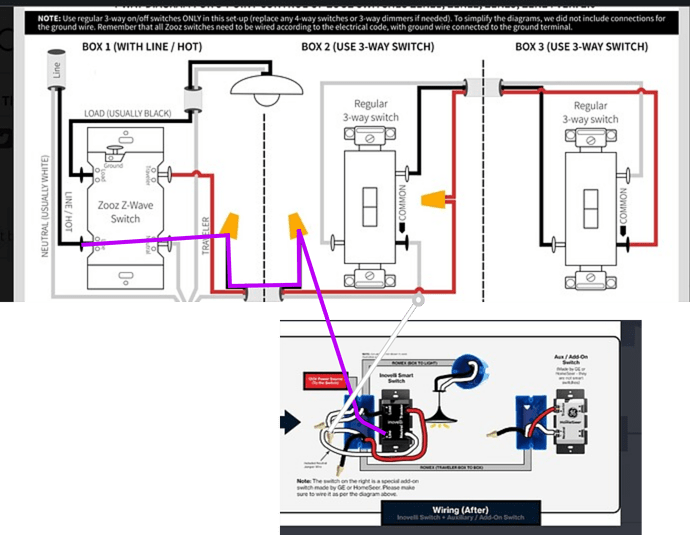 Thanks. The drawing makes sense. A bit confusing because in the picture it looks like the hot is coming in from the top of the box, not a pigtail.

It is a direct connection from the top. I left the wirenut in the drawing as I just used the original drawing from zooz. Same wiring all the same.

Can you let me know the make/model of the Zooz switch? You may be onto something here. I don’t know how this would affect the Inovelli, but it may in some weird way.

Reason I’m asking and bringing this up is what you experienced was actually why we put the warning sticker on the switch (not your fault as you did wire it correctly – I’m just explaining the back story).

Our Gen 1 Switches used the same 3-Way logic as the Zooz switch as it came from the same manufacturer. When we came out with the Gen 2’s, we used a different logic to detect the 3-Way so that we could use either an aux or a dumb switch.

The problem we ran into is if someone replaced a Gen 1 Inovelli switch with a Gen 2 and kept the wiring the same at the dumb switch, it would cause the Inovelli switch to pop and completely destroyed it.

So, I’m wondering if somehow the neutral you’re sharing from the Zooz 3-Way is messing up the Inovelli? I don’t have an engineering or electrical background, so I’m not sure – but what you’re experiencing is exactly what happens when the Red Dimmers were hooked up to Gen 1 dumb switches.

Now, if the Zooz is their Gen 2, I think you should be fine as their logic is similar (not the same, but similar) to what we used.

The fun thing with zooz is that they use the same part number for all generations. I went back to my purchase history and came up with this