I think I’ve come to the realization after an hour of messing with it-- is it impossible to have a switch at the load end of a 4-way?

I set up a dimmer in the load end:

It works great until one of the other switches in the chain is toggled, at which point the dimmer loses all power, which I now realize is because the entire upstream is a switched line. Is there a workaround I’m not thinking of?

Yep, the problem with that end is that the hot gets toggled back and forth between the two travelers and switched to the common to route the hot to the light. So it sounds like you picked a traveler as the hot source, which lost the hot when another switch was thrown, sending the hot to the other traveler, consequently killing the power to the traveler you used.

I discovered the same yesterday when attempting to install a new Inovelli dimmer in to one of our 4-way switches. As best as I can discern, the smart switch can only replace the “main” switch in the circuit. Otherwise the smart dimmer loses power when one of the switches up the line is switched off. (I assumed it would be able to acquire power from the traveler, but clearly I don’t understand the circuitry well enough!)

The load can be at either end, but the dimmer must be where the power comes in.

BTW the 4-Way switch just reverses the two wires
So in this drawing, the 4 way when the toggle is down: 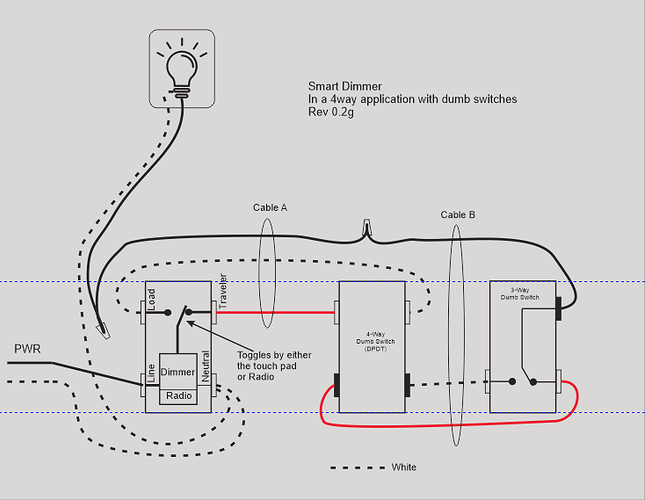 It’ll work with two add on switches. You’ll just wire nut the line all the way through and use neutral and traveler to toggle.