I have a LZW31-SN dimmer that used to be wired to a light that had one bulb (LZW42). I installed the dimmer originally without a neutral wire and installed a bypass at the light. It worked in this configuration.

Now, I’ve replaced the light with a three bulb light (all bulbs are LZW42s) and this time used the pigtail to install the neutral wire. Since I assume three bulbs would be enough of a load on the dimmer circuit, I removed the bypass. I wired the dimmer according to the wiring diagram for use with a neutral wire but now the dimmer does not work. The LEDs don’t even light up. If I reverse the Line and the Load, the dimmer will light up but the paddle button does not turn on the lights at all. I’ve tried removing the dimmer from my hub (SmartThings) and re-adding it but it still doesn’t turn on the lights. I believe I defaulted the dimmer as well.

Any ideas on what to do to get this to work?

ree bulbs would be enough of a load on the dimmer circuit, I removed the bypass. I wired the dimmer according to the wiring diagram for u

Can you get a picture of the wiring? How come when you originally wired the switch you didn’t use the neutral?

did you reconfigure the switch for neutral and single load (para 21 and 22)?

Here is a sketch of what I have in the box. 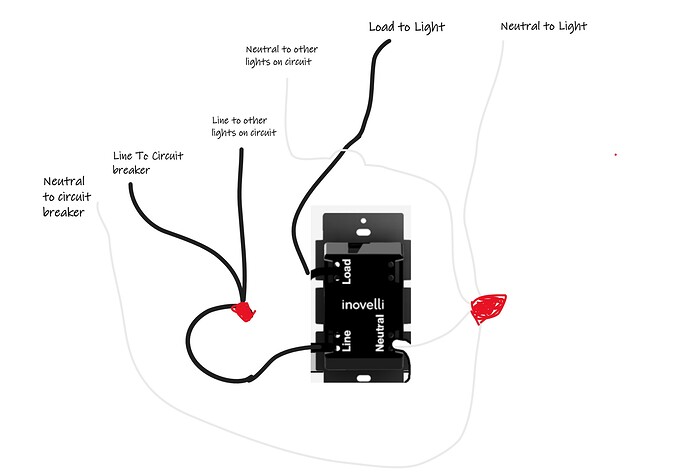 The instructions that came with the dimmer showed that a bypass was needed and I didn’t continue reading the instructions further. Had I done so, I would have wired it with a neutral. I don’t recall reconfiguring the switch for neutral and single load. Would resetting the switch to factory defaults reset the setting to Neutral and Single Pole mode? The only way I can get power to the switch is to swap the Load and Line wires and am wondering if it would cause issues if I change the switch parameters if they are wired in reverse.

Great. I was worried that you really had a switch loop and not a real neutral in box.

The dimmers default to no neutral and single switch mode when reset or when excluded from the hub.

I’ve tested a number of red and black dimmers with a cheater cord and they do not require a load or parameter 21 changed to power-up with just line and neutral connected. It makes sense to work because otherwise how could anyone install one with a neutral? So, it should be working as connected for you. I don’t know what is wrong, but I do recall that issue happening before. Possibly it was a bad device but I can’t recall for sure.

dimmers default to no neutral

Dimmers default to neutral for Parameter 21 (Switch Type). The default value is 1, which is Neutral.

It’s probably best just too plan for configuring the device (either locally or from a hub) to ensure your switch is setup for exactly how you have it wired.

I’ve tried setting the parameters as suggested but still no luck. What’s odd is that the only way for the switch to get the LED to power up is to reverse the Load and Line wires. It won’t work if I put the Line in Line and Neutral in Neutral with no wire in Load. If it’s wired with Line and Neutral shouldn’t it still power up?

Thanks for everyone’s input
Victor

Yes, a hot and neutral alone should power the switch.

I’d suggest that you consult with an electrician to get a handle on your wiring schema. TBH, you posted some things that are confusing.

You should not be moving conductors around just to see if it works. The proper way is to use a meter to test so you fully understand which conductor is which. The fact that your switch only powers up in a configuration after you switched conductors suggests that either you do not fully understand your wiring configuration or you damaged the switch in the process of experimenting.

Get some help. We will be glad to work with your electrician to help get you going!

Agreed, none of this makes any sense and swapping wires is never safe.

Just get someone to come help you out who can map the circuit and reference the wiring diagrams.