Dimmers: Send custom byte values to associated devices when turning all the way off (or on)

I was inspired by a feature I read about on a Fibaro in-wall relay (FGS-213). This device is a relay which toggles the connected load when the dumb switch its attached to toggles. But here’s the cool thing–it has these association groups:

So you have the option for your associated devices to receive ON/OFF, or 0x00/0xFF Multilevel. 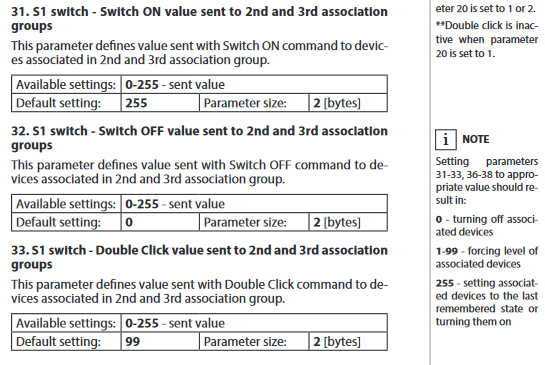 My kitchen has overhead lighting (Black dimmer) and undercabinet lights (the other guys’ dimmer). I could use this feature so that the cabinet lights stay on at a low brightness, even when I turn the lights off from the wall switch.
I already have this working using automations in my home controller, but there’s a split-second delay when between the two sets of lights changing.

It could also be used for roller shades: close the shades to a certain coverage amount when you turn the lights on at night; open the shades when the lights turn off in the morning.