Most electrician here(Canada,Quebec) never ground the outlet itself, because our box are all metals, and the ground is attached to the box only, which is transferred to the switch via the metal frame. But the black paint finish suggest that conductivity for ground is not guaranteed and require additional ground connection.

Electrician still connected the light switch without the ground connection because that what they do… They expect that if they made it of metal, then it can be used as a ground.

I haven’t seen any statement that the metal frame attached with the screw to a metal box(The 2 screw that hold the light switch to the box) can be used as a ground even with the paint on, so maybe it is to comply to the different electrical code, but normally paint mean conductivity is reduced so my personal expectation is that it doesn’t !

So suggestion is either make the switch with no black paint, or confirm that attached screw can still be used as a ground connection if the metal box is grounded.

The only thing that make me think that it might be fine as it is, is the fact that the actual thread of the screw is probably not painted, and the friction of screwing it in would reduce the paint on the thread, so there would be a ground connection from both screw.

The only thing that make me think that it might be fine as it is,

This was discussed following your inquiry in this other thread 5 days ago. You shouldn’t rely on the screw alone as it’s possible to center the screw in the hole and not have conductivity.

That coating is not conductive. So he is correct that the switch won’t self-ground. However, you can remove that coating with a dremel or other roto-tool. It will take about a minute. Also, unless there is something weird in Canada, there shouldn’t be any reason you can’t physically ground the switch if you don’t want to grind the coating. The “never do it” is probably they usually don’t do it because the devices self-ground. At least in the US, we simply ground the switch with a pigtail.…

While the switch will ground on the screw, since the mounting hole is larger than the screw diameter, it is possible to mount the switch where you would not have contact between the screw and the conductive surface of the switch, hence no ground. So to insure a proper ground, scrape or grind off the coating or use a pigtail.

I wasn’t here to have a discussion about it with you !

Electrician connect switch this way. We are not going to change how they wire the switch if it an industry accepted way of grounding it ! They don’t even ask them self the question, they just do it !

Now either a special warning should be provided, that no paint is applied, or it does ground just fine like any other electrical equipment they install. The black paint service no esthetic purposes once installed so that an easy improvement in usability.

It up to inovelli to decide if they want to consider it or not !

Hey so this is an interesting topic – I’m going to chat with UL as they’re the ones who approved our switches and see what the proper response should be.

I would not advise to ground it this way due to what Bry said in the other topic, but given this is a wishlist, we can see about adding this to future switches. I’ve just honestly not heard of this practice before (grounding directly to the metal box without inserting the ground wire) so we hadn’t considered it. Also, given it was approved by UL, it hadn’t crossed my mind.

Not saying it’s not a concern, I’m just giving our perspective. We’ll definitely take this under consideration now that we know it’s common practice in Quebec.

Thanks for bringing it up!

Thanks ! I’m really wondering what they would say about it !

As a reference, my first ever smart switch that I got a few week ago was the Gosund, and quickly realized that wasn’t the experience I wanted (I give it a try because I could write my own code so I can get the UX I wanted., but the toggle feel horrible)

But here a reference of how it look in the back : 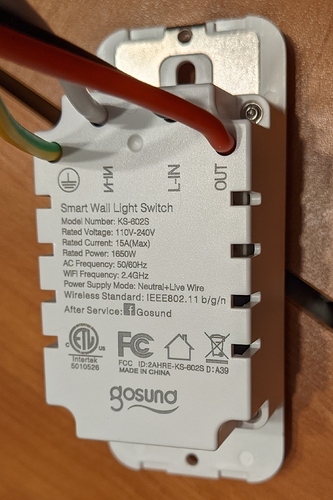 You can see that even if there is a dedicated ground wire, the case is plastic and they made a section of it that would connect to the box with the metal pad for it. (But, that doesn’t connect to the screw, so in my home installation, most of the light switch chassie never touch the case… So I’m not sure why they added this.

I was surprised when I was told this by the electrician and when I saw how my house was wired (6 years old).

Also, of all the light switch, only one (bedroom closet) didn’t had a neutral in it (I know because I just replaced all my other light switch (except some 3/4way switch). None had wired ground to them (The NEMA 5-15R are all grounded (ouf!)).

Another tiny reason to remove the paint, is that when the outlet get screw, the paint does get partially removed from the surface by the screw and can be seen dropping on the top of the light switch toggle. I don’t know if it occur all the time, or I just wasn’t taking too much attention, but I noticed it a couple of time. It not a big deal unless you consider these small particle potentially harmful.

FIY, I just received a Sinopé dimmer, and they have no ground at all on the switch and have a black finish !

It does have a metal piece that seem to be to create additional contact on the top screw : 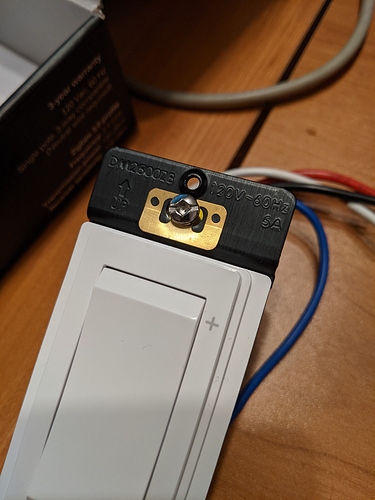 The old switch also had this small metal touching to the screw : 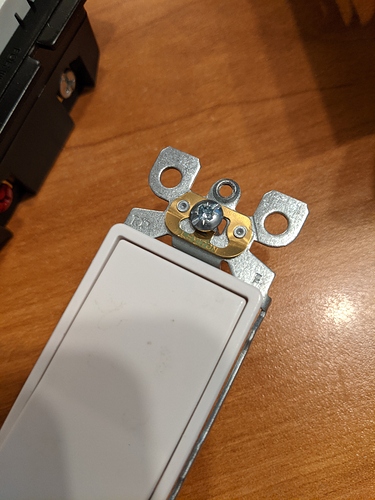 So in the case of Sinopé, there is no actual ground connection, and the only one is made via the screw, but it also prewired and it cETLus listed, Zooz is cETLus, dummy leviton is CSA, and Inovelli is cULus…