Any plans to bring back the outdoor plugs? Especially the dual unit with two controlled outlets. I have one of these could use more. I never had any issues with the one I have now and the design is spot on.

That or and outdoor/weather resistant socket… Either would be nice

@NicksGarage – yeah definitely. I really do miss that product. It holds a special place in my heart as it was the first one I got to design and manage from start to finish. Problem is the old manufacturer has the rights to it, so we’ll have to start over.

Right now, it’s slated for early to mid-2020, but the good news is that we have time to mess with the design and features if you want since I haven’t kicked off the project yet.

Anything you (or anyone else) would want to see included and/or improved.

One of the things I’ve heard in the past is improving the 90 degree plug as sometimes it can be hard to put into an outdoor receptacle, but I’ve never had that issue so I didn’t know how prevalent the issue was.

Given that most codes now require a protected in use cover, wouldn’t a simpler option be a smart outlet in the box? Boxes are only $10 CAD.

We actually used a smart switch indoors to control a regular outlet outside, so as we can program for Christmas lights etc. Also in a protected cover. 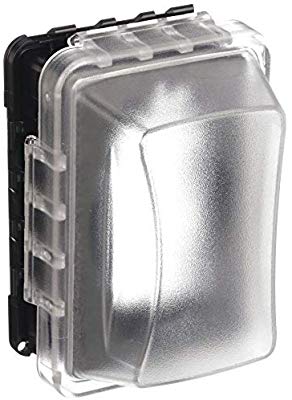 We talked about how maybe we just make a smart outlet and then we could use them indoors or outdoors (ie: not having to develop both an outdoor plug and an indoor outlet) but the problem we ran into was that it looked like all outdoor outlets have to be GFCI (at least in the US). So, given that we figured people didn’t want to go nuts and install GFCI outlets everywhere in their house, we’d still have to create a separate in-wall outlet.

Which brought us back to the outdoor plug.

So many decisions… a good problem to have!

EDIT: If it’s any consolation, we all liked the cleaner look of the outlets with the cover on it.

On my workshop, I put a GE Z-wave outlet on the outside in a covered box. This replaced a GFCI outlet so I had to put a GFCI breaker on that circuit. I was trying to get the Z-wave to link up to my house so that I could use Z-wave in the shop. But it turns out that the metal building is too much of a blockage. I ended up putting another wifi router wired into the shop and a second hub. The GE plug has been fine outside.

One reason I prefer a plug in outdoor module is that I move them around. I use some of them for Christmas lights on the house during the season but then move them to run a fountain and greenhouse fan the rest of the year.

Trying to get GFCI and the Z-wave module into one outlet assembly has got to be a problem. I tried to get an outdoor GFCI 20amp outlet into an outside box and just couldn’t get it in there. Would have needed an extra deep box or an extension ring. I ended putting the GFCI outlet inside on the circuit.

BTW, I like the flat plug on my Inovelli dual outlet outdoor plug. My GE ones have a straight outlet and it makes it hard to get them to lay flat against the wall and also had trouble getting one to fit under one of those domed weatherproof outlet covers. Of course with the flat plug, you can’t put one on top of the other unless the cord comes out at an angle but an angled plug might not fit under a cover either.

Code here in Canada (AB and BC at least) pretty much demands a separate outdoor circuit, so either a GFCI outlet first with all the others as a load, or better still a GFCI breaker (which now also has to be arc fault…). Combining GFCI AND smart seems like a step too far currently.

I think there’s room for both hardwire and plug-ins options; just make the smart outlet rated for outdoor use and give users the option along with the usual disclaimer…

For some reason most smart outlets only control one half; I’d prefer both to be smart. Would also like the ability to dim lights plugged in, but not sure if that’s allowed?

Would it be possible to design the plug with a rotating mechanism similar to this one so you could orientate it and the chord in any direction.
Belkin Outlet Strip

We actually had something similar planned for our indoor plugs that we were going to develop next year. In fact, I used Belkin as an example for the back of the plug: 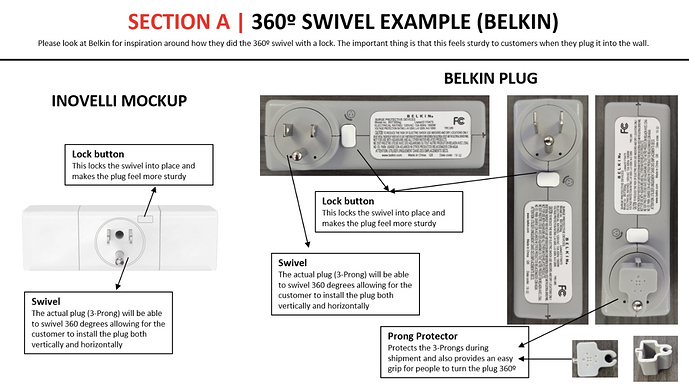 The problem we ran into was that we wanted our plug to be as small as possible and this back swivel caused quite a bit of depth.

However, I think in your case, if you just put it on the end, it should be fine.

@Ma2J – you’re looking for a surge protector, network and USB fast charging ports for an outdoor plug? That may be pretty hard to get IP7 outdoor rated lol!

Oh come on!.. With all this home automation stuff I’m doing, I’m having to live/work in the dog house.

Another vote for bringing back the Dual Outdoor Plug. I have so many things I want to do in my yard!

Would really like to see this. I want to rip out my crappy GE Zwave (non-plus) outdoor outlets…

Only things I’d want to see are good zwave implementation (goes without saying), and maybe an angled plug so they route well out of the outlet cover. Energy monitoring MIGHT be cool, but definitely not a requirement.