I was able to setup the smart switch as shown in the wiring diagram for a 3 way switch. Mine was line/load in a separate box. But the location of the switch is inconvenient. I was trying to swap the dumb and smart switch. But it won’t work. I have tried a few things:

Is there’s a way I can make it work?

It sounds as if you want to put the Inovelli in the load box. The only way I know to do that is by using an Aux switch instead of a dumb switch. The problem is that a dumb switch requires two traveler conductors between the switches, whereas the Aux only requires one. Two conductors are taken up getting the hot and neutral to the load box for the Inovelli, so you are only left with one conductor for the traveler. 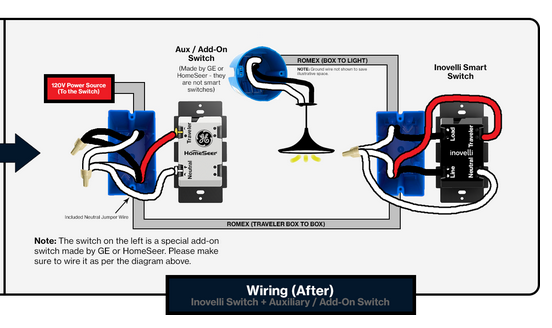 ah. I see. Thanks for the diagram!