Near my sink I have switch for over sink light and garbage disposal.

I replaced switch for over sink light with inovelli red series dimmer. When i turned breaker for light and disposal back on, the disposal trips right away. Red light flashes 5 times which means something about its sensing a path to ground other than via the ground wire.

I know its the neutral line that causing it because if I take it out of the inovelli but keep the line, load, and ground wires connected, the disposal breaker doesnt trip.

If I connect the neutral and keep the disposal breaker OFF, the inovelli powers up fine and controls light without issue. Turn breaker on for disposal, trips.

I dont get it.

Heres my wiring. Light switch on left, disposal on right 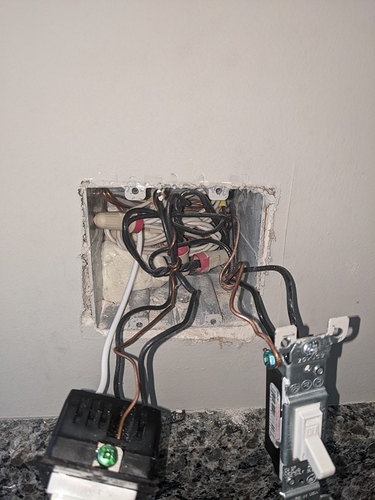 Blue breaker is the one tripping 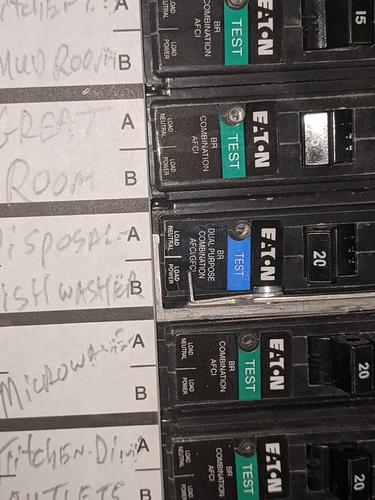 A little tough to see everything in your box, but here is what I’m thinking. How many neutral bundles are in there? It looks to me like there is just one, but you have 2 circuits in that box. If that’s the case, separate the neutrals into 2 bundles, one for each circuit, as they shouldn’t be blended.

Neutrals from 2 circuits connected together are notorious for tripping AFCI’s. I don’t know why the Inovelli switch would make a difference, but try separating them (which they should be anyway) and see what happens.

I just had the same exact situation with a similar setup. I’m giving up on my Inovelli’s in 3 way and 4 way setups in my house. They work great for me in single pole configurations and I’ll keep those

but this is single pole, lol. Just two single poles in 1 box. GOnna try what @Bry said above

I think @Bry is correct. AFCI breakers are extremely sensitive and the code being thrown is not always correct. If the two circuits that are bundled together are on separate panel neutral buses that might be enough. You might see the same behavior (eliminating the switch as the issue) by trying an illuminated switch in this configuration.

I just replaced one of mine that would trip every time a toaster oven had been running for more than a few minutes, and the new one hasn’t shown the same behavior after a month… only after I tried to diagnose the incorrect codes I was seeing for a week.

After pulling everything out again, i noticed a second batch of neutrals. And following the other batch it leads to the sink light. The other batch (that I was connected to and was tripping) were connected to disposal and dishwasher.

Connected the neutral to that other batch, all good except light wouldent turn off all the way. Switched line and load, all good!

Glad you got it going. Using the neutral from another circuit will definitely trip an Arc Fault.

Also nice to know that your electrician didn’t bundle all those neutrals together!