I’ve identified that line and load are located in the same box (where I plan to install an LZW31-SN), but I’m honestly a bit unsure on how to handle rewiring the remaining boxes. The circuit looks like this, with the last box being the one that will need to remain as a dumb switch:

@Bry -Even possible? I don’t see how the dumb switch can be included with this setup. Maybe with an Aux switch but I don’t think I’ve come across a double aux switch in one.

@kelchm - Can you expand the box to a double gang “old work” box?

I haven’t done a 5-way but I don’t see why not. 4-way and 5-way are really the same schema-wise. The only difference is that there is an extra 4-way switch in the middle. But they work the same. You pass the hot to the far end. The hot comes back to the light switched over one of the two travelers.

You’d use the wiring diagram for the 4-way Line/Load same box. If you think about it from the Inovelli switch’s perspective, all it knows is that it has to send the hot toggled between the Line and the Traveler. It has no way of knowing how many switches are involved. So to my thinking, if it works with a 4-way it will work with a 5-way.

I don’t think you have to re-wire anything other than the Inovelli box, as your wiring looks like a standard 5-way implementation.

@Bry - Maybe I misunderstood. I thought @kelchm wanted to install 3 Inovelli dimmers along with the 1 dumb toggle in the right box but wouldn’t be able to send the line to the far box because there’s no way to get the traveler back to box on left.

Nope, I did. I see what the issue is now. I agree with @harjms. I do not see any way to get a signaling traveler to the far box as both travelers are used for switched hots.

I would either cut the existing box out and replace it with a 2 Gang or just add another single box in close proximity to the other.

Unfortunately adding another box or moving to a 2 gang box isn’t really an option in this case due to space constraints: 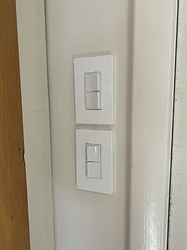 I spent some time thinking about this last night, and here’s what I’ve come up with:

Maybe if we get enough people interested Inovelli will make a dual switch?

If you can power the “middle” switches via other existing power, then I agree you can daisey-chain the 3-wire giving you a 3-way with a dumb switch.

question in my mind is if you can use associations with a 3-way.

I believe you can just have to setup the associations. Make sure they’re red series.

I now have the initial version of this wired up with an LZW31-SN in box 1 and the original dumb switch in box 4. The switches in box 2 and 3 have been removed and the travelers have been wired together (white to white, red to red, black to black). I have also configured parameters 21 and 22 to “neutral” and “3-way toggle” respectively.

The dimmer only controls the lights with the dumb switch toggled to one of the two positions. I’ve reviewed the wiring diagrams a few times, but I’m not seeing where my mistake is. 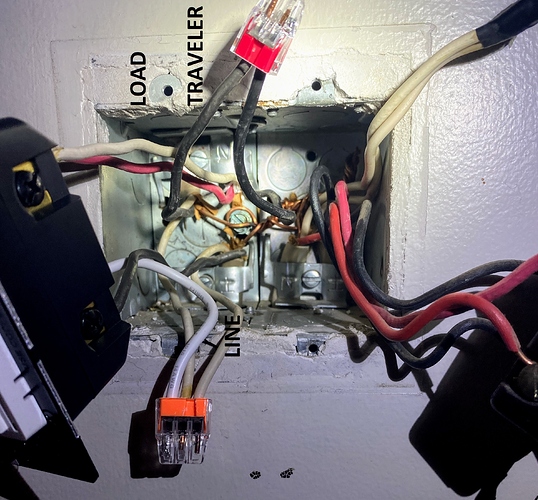 For the dumb switch, the black wire from the traveler is connected to the black ‘common’ screw. 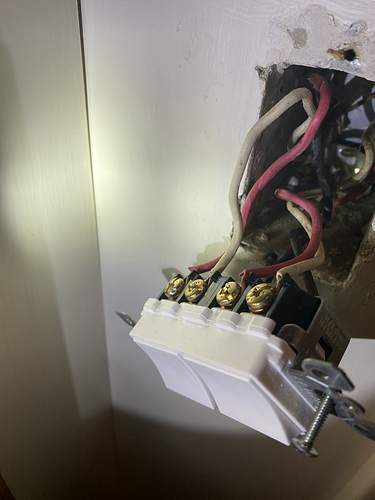 Try forcing to parameters 21 and 22 to something else and re apply. Or try from the config button setting the parameters.

That wiring looks good to me.

This issue comes up a lot. One thing to check is to insure the two travelers have good connections at the switch, where the conductor is on the proper side of the plate.

The other thing to try is to program the switch manually. My suspicion is that the switch isn’t programed properly even though the hub thinks it is. At the switch, change the parameter to something incorrect and then put it back.

Prerequisites: This is for if your switch is wired with a neutral wire and with an existing dumb switch.  Inovelli Model #'s: LZW31-SN (Red Series) or LZW31 (Black Series) This article does not relate to our Gen 1 dimmer...

The other thing to try is to program the switch manually. My suspicion is that the switch isn’t programed properly even though the hub thinks it is. At the switch, change the parameter to something incorrect and then put it back.

You were 100% right – for whatever reason the parameter changes I was making through OZW weren’t actually taking. Manually making the changes at the switch with the config button immediately solved the issue.

PS – for anyone else that encounters this in the future, a dead giveaway is the fact that you should hear a relay ‘click’ when transitioning from on to off (or vice versa).