I am trying to install an Inovelli switch on a 3-way setup with 2 switches and 2 lights. The wiring is a little unconventional because the power goes to one of the lights first.

For the second switch, both of the travelers have power and the wire connected to the common terminal does not. If I disconnect the wires from the first switch, none of the wires have power. There are other wires in this box and I will have to check if any of them have power.

Hopefully this all makes sense. Does anyone have any idea what is going on here? Thanks for the help!

Pictures will help, but first dimmer or on/off switch?

I am using an on/off switch

@km782 - First thing is determining where the line is coming. From the initial read, it looks like box two. You have to have a neutral for the on/off switch. There’s no way around it. So either you’ll need to rewire and use an aux switch, put on/off in the 2nd box location (and hope there’s a neutral), or look at a dimmer model. Pictures and determining where the line is coming from is crucial in trying to help wire.

So I just got done wiring a 3 way on/off. I determined my line and load were in separate boxes. I installed the Inovelli switch my my first box because that’s where line landed.

Pictures attached. The electrician who wired my house mainly either put loops in the wire to indicate load or it wrapped the bundle of wires to the switch. 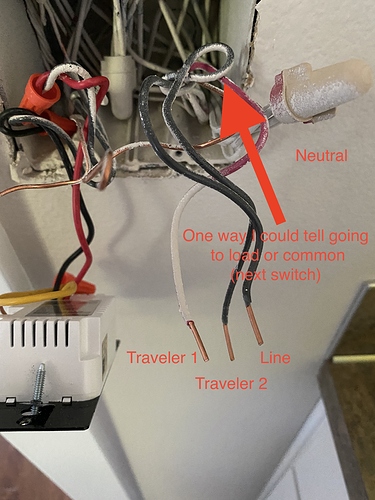 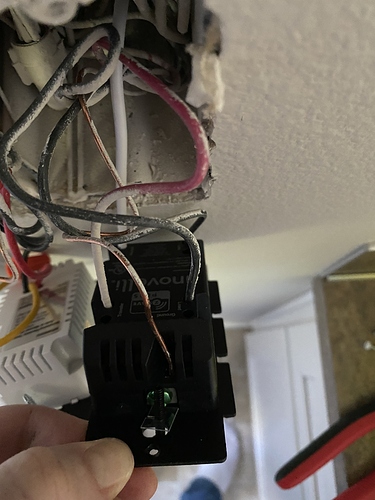 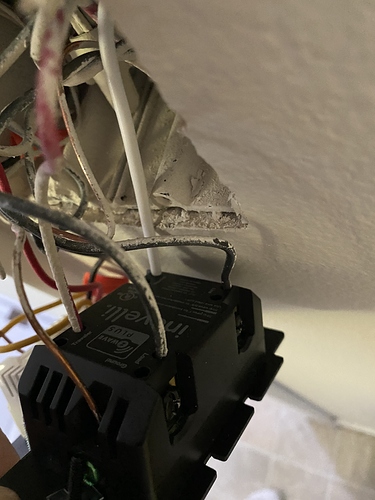 Great, thank you for posting this! I tried taking apart another 3-way circuit in my house and was successfully able to figure out how to hook up the Inovelli on/off switch so I’m hoping I can do the same with this one. This one is more complicated and I am still working on getting pictures. It is a little inconvenient to shut off the breaker so it might take me a few days. 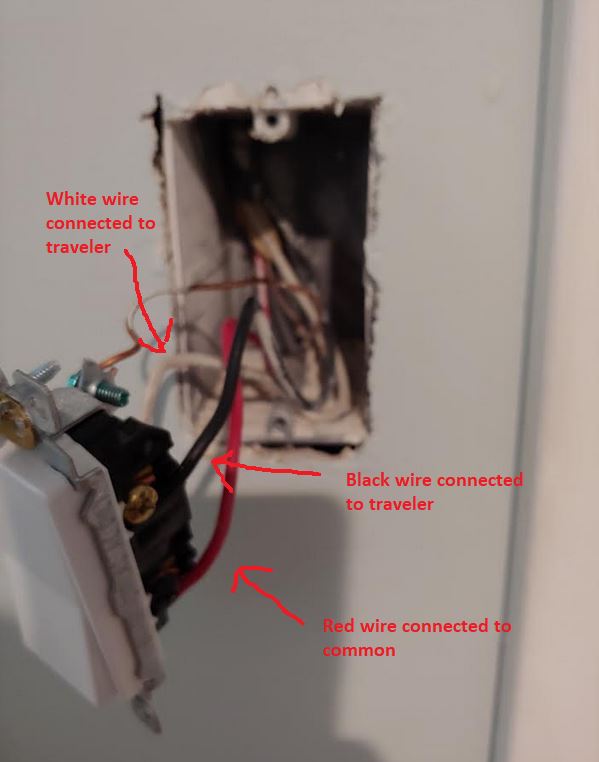 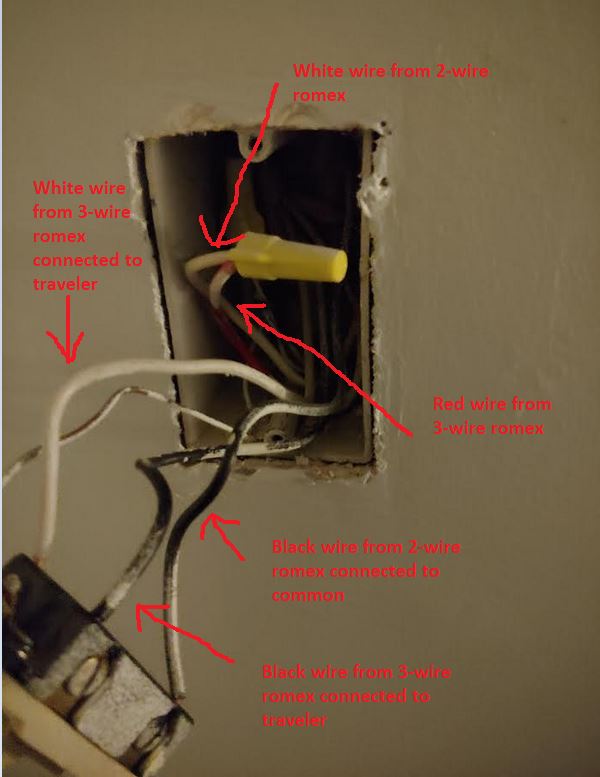 The first box has only 1 3-wire romex. The red is connected to common and the black and white are travelers.

I’m not sure but this diagram is my best guess for how the wiring is setup:

Here is how I am think about wiring the circuit for the Inovelli switch:

There is no Inovelli diagram for this situation. Does what I am planning on doing look correct? Thank you!

@km782 - Unfortunately, the on/off requires a neutral. Without a neutral this setup won’t work. You could look at getting a unboxed dimmer and swap it in here with this (no neutral required for dimmer, may need bypass though). Calling in @Bry - He’s the man at some of these wiring diagrams.

So let’s think about how power to the light works, generally. First, it’s not really unconventional for older installations. It was an easy thing to do. Put the three-way on the end of a run and then just run Romex to the switches. As you’re aware, the end result is no neutral in either box. Good for Inovelli, pain in the butt for us.

As @harjms said, you can’t use a switch here. Switches won’t work with no neutral. You should try to get a dimmer working, as they will work with a no-neutral generally. A dimmer can be configured to work more or less like a switch.

It makes it easier to wire if you understand the anatomy of the circuit. Typically, with power to the light, the hot is passed through the lights by joining wires at the light’s box and then routing it to the switches. Usually, the power arrives at the first box in the chain and then is passed to the second box in the chain. So the goal here is to find that constant hot attached to a switch in the box.

I’d like to see better pictures of the boxes with the switches and wires pulled out. Need better depth of field so that inside the box is in focus. No shadows in the boxes too.

What type of lights are in use? Can you see in the boxes if need be?

The lights are LEDs so I’ll probably need a bypass if I decide to use a dimmer.

If I take apart the light fixtures you can see the wiring but I’ll have to get a ladder and work on that. Even if I do that though, it sounds like it is going to be impossible to get a switch working with the current setup without running another romex (which will involve cutting open the wall and I don’t think I want to do that).

Can you help me understand what you are hoping to see with better pictures of the boxes? In the pictures that I posted I pulled out every wire and connection so that it is visible. There is nothing else in either one. The first box has a 3-wire romex and that is it. The second box has both a 3-wire and a 2-wire with the white from the 2-wire and the red from the 3-wire tied together.

Thanks again for all of the help!

Can you help me understand what you are hoping to see with better pictures of the boxes? In the pictures that I posted I pulled out every wire and connection so that it is visible.

Sometimes when posters describe things, they’re not always accurate. So I was looking at the first box and I see out of focus Romex in the box. I can’t see if there is a 2nd Romex in there or if it’s just the single Romex coiled up. From what you are saying, box 1 just has ONE 3-wire in it, so I’ll go with that.

I wouldn’t worry about the ceiling boxes yet. I’m thinking that the constant hot is being sent to box 1 via the red, after going to box 2 first. To test this:
1 - Remove the red from the switch in box 1 and see if it has a constant 120V. You can test between the red and the ground (bare). Do this test with the other switch in both positions. If you have a constant hot there, then with the red from box 1 still disconnected
2 - Go to box 2 and pull the wire nut off the red and white bundled together. Test that for a constant hot as well. Test with the other switch in both positions.

I think the hot is coming from the lights via the white on the 2-wire in box 2. It’s sent via the red 3-wire to the common terminal on box 1. The hot is sent back to box 2 via the white and black travelers on the 3-wire, where it routes the hot via the black on the 2-wire on the common terminal, and then back to the light on that black. The neutral is already in the box with the light(s).

Yes, you are correct, the constant hot is the white wire from the 2-wire romex in box 2. The red in box 1 has power until I disconnect the red wire in box 2 and at that point the red in box 1 no longer has power.

Ok, great. So you need a dimmer and an Aux switch. The dimmer goes in the box with the 2 Romexs, box 2.

You may or may not need a bypass at the lights depending on what your lights draw.

Somebody please double-check my logic.

Great, thank you! Just a clarification, is an Aux switch just any “dumb” 3-way switch? Or, since only 2 wires are connected is it just a regular single pole switch?

@km782 - No it isn’t. It’s not exactly a smart switch either… Here is the aux switch I used in my house:

Thank you! I will get one of those