Welp, hello all. After days/weeks of trying to figure this out myself, I need to resort to the expert here with a common question I cannot find the answer to: how to wire my 3-way non-neutral light circuit which does not have any dedicated power wires coming into the receptacle, only lines to the fixtures. 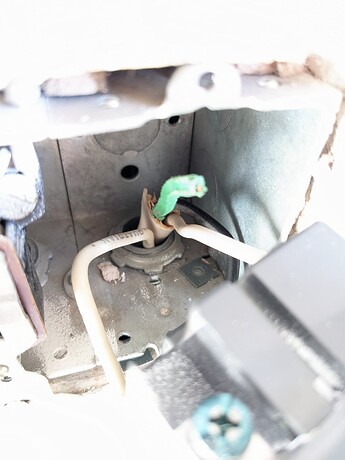 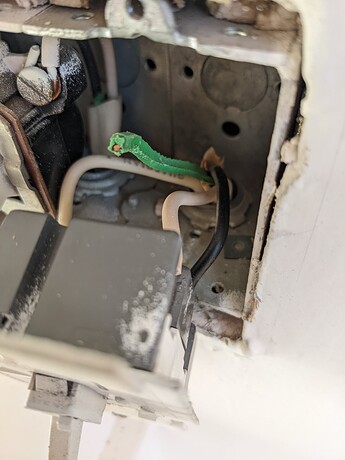 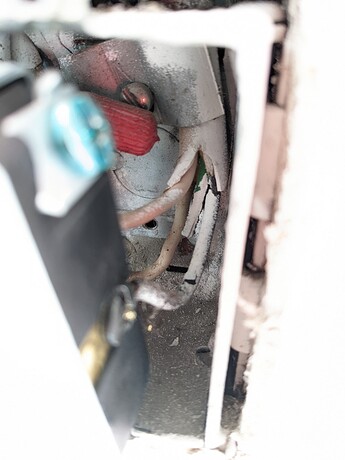 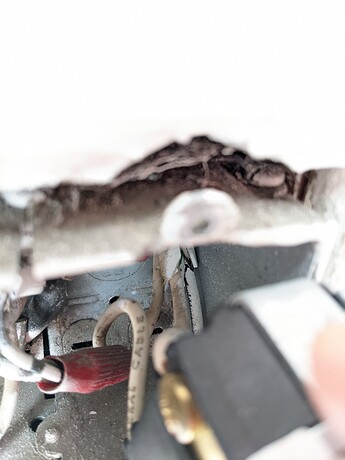 Using voltmeter, I have identified the common/live (black in both pictures), and tested the other wires to identify the traveler/load (white in both pictures) Indeed, as you can see in picture 1 and picture 4, the traveler is a separate wire outside of the romex carrying the black and other white.

Given this situation, I would like to put the innovelli red dimmer where picture 1/2 is (to replace old dimmer) and put the enbrighten switch where picture 3/4 is.

Question: Can anyone provide a wiring diagram or explain how to wire this up? Every diagram from innovelli shows at least one receptacle receiving 2 romex (1 to the light and 1 from power/breaker). However, I only have 1 romex bundle in each receptacle, both of which, I believe, go to the lights, where the neutral is and where the romex from breaker comes in.

Happy to provide more pictures, or measurements of the voltmeter.

I am trying to avoid opening up the light fixtures, as they are high on the ceiling and I dont want to get the ladder involved.

So at each of the boxes for the connections pertaining to the switches for this 3-way, are there only three conductors at each, excluding the ground? There is a wiring configuration that with power starting at the light and (usually) a 3-wire going to each box. I can’t say that’s what you have, but take a look at this wiring diagram. 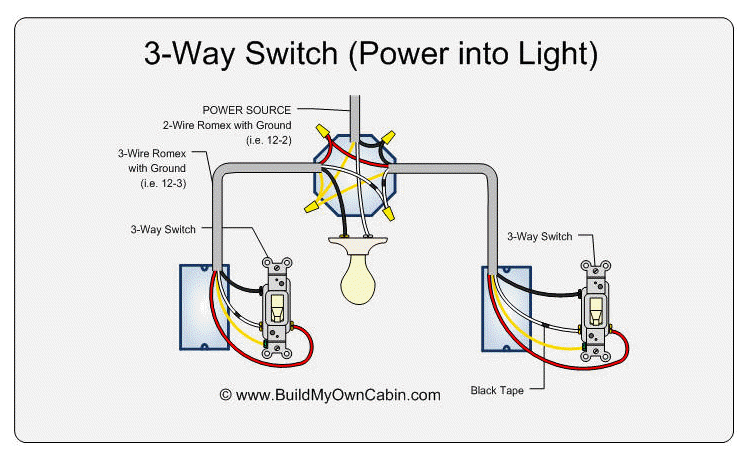 Correct, each box of the circuit has, as shown in the picture, three conductors (excluding ground).

Note, i do have two light fixtures (instead of the one shown) but that doesnt matter for our purposes.

If this is the current state of my circuit, how would one go about replacing the 3 way switches with the innovelli dimmer + add on?

Ok, I can give you a drawing based on the drawing I posted. Only you can determine if it’s correct or not.

The first thing to determine is which of your two boxes FIRST gets the hot. You’ll notice in the drawing that the right box first gets the hot.

You are also going to have to determine which of the two light boxes gets the power. Unfortunately, you may have to get into that box to rewire. It depends on where you want the Inovelli.

This one does not require rewiring at the light. 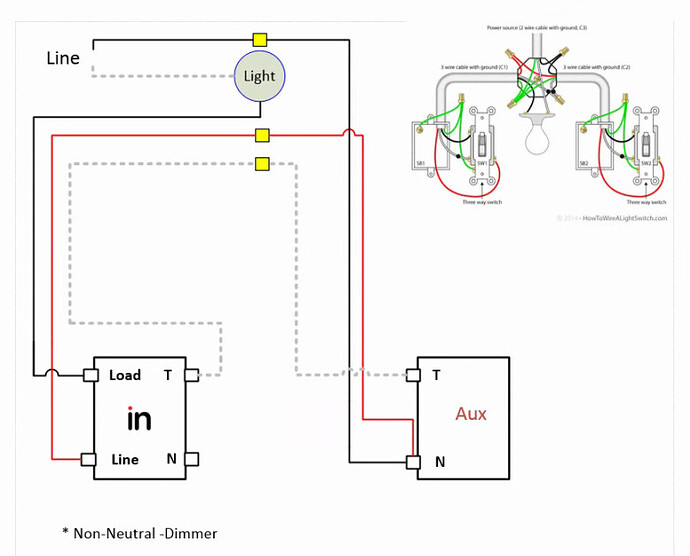 This is the reverse, but it does require you to rewire at the light. 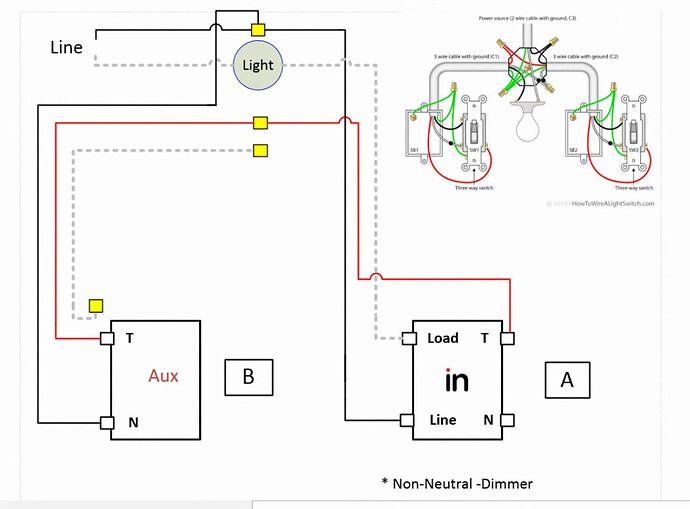 Thank you. This is very helpful.

I know which of the two lights gets the power. Is there anyway to use a voltmeter (or some other device) to determine which of the two boxes gets the FIRST hot (i.e., the black wire / line from Power source is directly fed and connected to common of the either of the switches)? I made notes/readings of all the terminals at each of the switches, with each switch in a different on/off state, so I am hoping that math/logic can get me there…

You can tell by whichever wire doesn’t change voltage when flipping the switches.

That will work, but my preference is to remove all six conductors from the switches. Use a non-contact proximity tester. Only one of those six conductors will be hot. That’s the one that gets it first.

That will work, but my preference is to remove all six conductors from the switches. Use a non-contact proximity tester. Only one of those six conductors will be hot. That’s the one that gets it first.

You can tell by whichever wire doesn’t change voltage when flipping the switches.

Hah. Of course. Ether will work. I will report my results and hopefully successes.

Based on Bry’s drawings, If I want the innoveli first in the chain (on the right), I will need to rewire the circuit?

Based on Bry’s drawings, If I want the innoveli first in the chain (on the right), I will need to rewire the circuit?

Yes, AFAIK. We’ve kicked this around before and these were the two alternatives. If someone comes up with another solution for the “power first” box without rewiring the overhead, I’ll be glad to draw it.

Unfortunately I don’t see any other way without modifying the wiring at the light. Even with two Inovelli dimmers, it’d still take some re-wiring to tie in the neutrals.

Thanks both. I may do the re-wiring, but am going to consider simply throwing a shelly 1L relay in the circuit to provide the simplest on/off control, and have the old switch/dimmer remain. TBD.

Just want to let you guys know that I did option 1 (no rewire at the light). Everything works great.