Alright, I’ll break the ice here in the Digital Lounge.

One of the things we do over at Inovelli HQ is have a book club where we select a certain book of the month (ok, like month and a half to two months) to read and at our weekly meetings we try to share a bit about what we’ve learned or what we find fascinating. 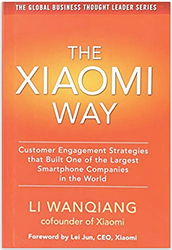 image.jpg484×700 114 KB
The reason we picked it was because Xiaomi is one of the brands that we look up to in terms of how they view their go-to-market strategies and thought leadership around developing & improving products.

Quick Company Overview: Xiaomi is one of the leading smart phone brands in China (they also sell a ton of other products now, but this book is more around their cell phone business). At the time they started, the market was dominated by Apple and Samsung. But through their, “Xiaomi Way”, they quickly became the #2 brands in the market and is constantly an innovator around the Android platform.

*While we’ve already started reading this book, two of the team members are leaving for the manufacturer for two weeks, so we’ll take a two week hiatus and resume when they get back on 08/26

Notes
These are just some notes I captured from the meeting and my personal thoughts around the chapters.

Chapter 1
What I found most fascinating about this chapter was their philosophy and thought process around how they treat their customers. Put bluntly… their goal is to, “make friends with customers” or said better, “no one wants to talk to a corporate robot, but rather they want to talk and engage with someone that understands them and they’d actually want to hang out with” (that’s my paraphrasing).

We live in an age where companies shouldn’t simply sell a product – but rather sell a sense of engagement in the product. We all want to be a part of something. Feel like we belong to something. Are you Apple or Android? Canon or Nikon? Team Edward or Team Jacob (ok, that was terrible)? Point is that it’s much easier to want to be a part of something when the people at the company are people who genuinely care and you’d feel comfortable inviting them over to hang out with (it also doesn’t hurt to have a sweet product).

Random nugget: When we buy something today, we’re are not simply buying what the thing itself can do, but rather what we can do with the thing

Chapter 2 - Products
This chapter was very eye opening and really hit home for me personally. The way they go about developing new products and improve existing products is really the key driver behind this forum.

Rather than simply pushing a product on people, Xiaomi took a different approach. They opened up their R&D to anyone that would listen and worked with the community to make a better product.

This is genius because they were competing against some of the biggest companies out there (Samsung, Apple, LG, etc) that already had a firm hold on the market. But the founders had a passion for cell phones and wanted to offer the public an affordable cell phone, running on Android, that had all the bells and whistles and constantly strove for the best products (sound familiar?)

Simply put, Xiaomi put forth their best guess at what people wanted, but soon realized that 100,000 project managers were better than 10. In other words, the community would help them build the best cell phones in the market.

People began to develop a sense of possession in which they wanted the product to be perfect and helped eliminate bugs while also making every effort to improve the product.